Article - August 5, 2013
As the majority of Nigeria's international trade is done through its ports, it is imperative that these be in shipshape 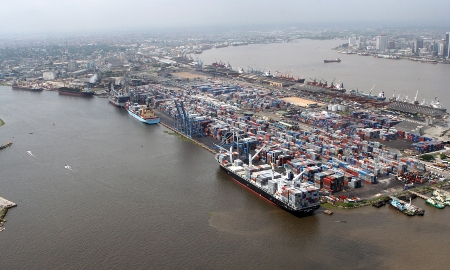 NIGERIA HAS SIX MAIN PORTS IN OPERATION, WITH AN ADDITIONAL FOUR IN THE PIPELINE
SHARE

The Nigerian government is investing and encouraging public-private partnerships (PPPs) to develop  transport infrastructure surrounding the ports, such as road and rail links, whilst also cutting down on bureaucracy within the ports in an effort to reduce clearance times.
Nigeria has six main ports – at Lagos, Tin Can Island, Rivers, Delta, Calabar and Onne. The ports of Lagos and Port Harcourt are forecast to see an increase in tonnage of 5.9 per cent and 7.2 per cent respectively by 2016, and with their facilities already stretched, new ports in the vicinity would help lessen the burden.

According to Habib Abdullahi, Managing Director of the Nigerian Ports Authority (NPA), most of the country’s ports are over 30 years old and as such have their limits. Fortunately, four new ports at Olokola, Lekki, Badagry and Ibaka are either under development or in the early to mid-phases of planning, and should help consolidate Nigeria’s strength and capacity as shipping hub.
An initial due diligence report has already been carried out for a greenfield 16-metre deep sea port at Ibaka, which could become the next most strategic port in Nigeria. There are also plans to build a self-sustaining industrial city alonside, complete with independent power plants, a refinery and industries. Located in a peaceful region in the southeastern state of Akwa Ibom, the $2 billion Ibaka port will be well connected thanks to the nearby airport and a four-lane expressway (currently under construction).
Mr Abdullahi also states that the NPA is carrying out a channel depth development project at its other ports. “Bigger ships mean more cargo and more activity, and therefore more revenue for the government. As a result, we will have more money to develop the ports. It’s cyclical,” he says. In recent years, the NPA has already dredged channels up to 13 metres; this more than quadruples the cargo that vessels can bring into ports, from 1,000 TEUs (twenty-foot equivalent units) to 4,500 TEUs.
Nigeria has also made great strides in improving port operations, even within just the past seven years. In 2006, the government initiated various maritime sector reforms, the most important of which was the opening up to the private sector. “We invited the private sector to come in and take over the operation of the ports,” says the NPA head. “The government decided to adopt a model where we offer concessions to interested parties and quite a lot of people applied. “We reviewed about 114 applications and about 24 were accepted. A lot of the terminals in the ports were concessioned and companies were given the chance to come in and operate. We as NPA play a regulatory role where we look at the operators and provide infrastructure, security and basic services. “We collect revenue and pass it on for development. We also try and encourage others to come in and develop greenfield areas in the ports.”
As for speeding up cargo clearing times and freight forwarding, an important step was taken last year when the Ministry of Finance cut the number of government agencies operating at the ports by more than half. Today just six agencies remain, among which are the NPA and the Nigerian Maritime Administration and Safety Agency (NIMASA), the seven-year old entity mandated with ensuring safe, secure shipping, a cleaner environment and enhanced maritime capacity.
At the time, Minister of Finance Dr Ngozi Okonjo Iweala said, “We know that without an efficient port system, there will be a high cost in the economy. What we’re doing now is to reduce those costs so that our business people will have the wherewithal to create more jobs.” To clear the final hurdle and ultimately achieve a 48-hour turnover, however, the NPA has its work cut out. There is a degree of pessimism among shippers and traders, as some 80 per cent of imports arriving at Nigeria’s ports undergo a 100 per cent physical examination.  What Mr Adbullahi envisions is greater interconnectivity among agencies as a way to simplify procedures. Last fall, the port authority submitted a letter to the Ministry of Transport, he says, and now “the port committee system is coordinating the activities of all relevant agencies within the ports. That will give us a one-stop shop.”