Building up Kuwait’s value base 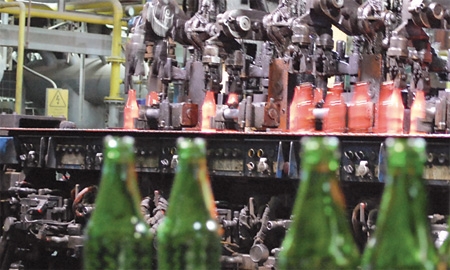 GULF GLASS MANUFACTURING CO. IS AN INDUSTRY LEADER IN THE NON-OIL SECTOR.
SHARE

The KPD is addressing the need to diversify Kuwait’s economy and expand its industrial base by investing in value-added industries such as manufacturing. With this industrialization strategy, Kuwait is taking the right steps toward sustainable and long-term growth.
To date in its history Kuwait’s industrial growth has been sporadic due mainly to the strong focus on its rich oil reserves. From 2003 to 2008, the manufacturing sector grew at an average of 16% and in 2009, it accounted for 5.3% of GDP.

Kuwait possesses a number of advantages for industry, such as a large pool of competitively-priced, skilled labor, an improving macroeconomic outlook, and political and legal stability. Kuwait’s highly strategic location in the north of the gulf region—with easy access to the “Big Three” of Saudi Arabia, Iraq and Iran—should encourage industrial players as well. In addition, Kuwait is a consumer society that is supplied with leading brands and top quality products from predominantly western countries. Thus, containers arrive full and leave empty, creating an opportunity for incredibly competitive pricing for the exportation of goods to the region and beyond.

Some companies, such as Refrigeration Industries Company (RIC) have already caught on to the importance of exploring foreign markets. “Because Kuwait is such a small country, markets are small and limited. That is why we mainly survive on exports,” explains Sheikha Intisar Salem Al-Sabah, chairperson of RIC.

Established in 1973, RIC specializes in cold storage for perishable goods—an important necessity given the region’s climate and the fact that 94% of its food is imported—and in manufacturing of air conditioning and refrigeration units. Its Coolex brand, originally developed in technical collaboration with international industry leaders York, is one of the oldest brands in the region.

Sheikha Intisar took on RIC leadership in 2007 and has reconsolidated the company’s leading position, which prior to her entry had deviated slightly into other ventures such as logistics. Now, with the help of international experts, RIC is rebuilding its factory, using the latest manufacturing technology to improve efficiency. This is indeed a clear advantage in a country with such limited land availability.

“Switzerland or Luxembourg are small, yet they do have industries. They just go vertically,” says Sheikha Intisar. “Luxembourg produces to sell—if you make an order it is ready within a month. They don’t have storage or anything. They have lean manufacturing and everything works on time. We need to imitate that.”

Other companies, such as Gulf Glass Manufacturing Company (GGMC), do require more physical space for the company to grow. This is easier said than done, since the government owns and holds 87% of the land.

“We’ve been working at full capacity for the last few years; there’s no margin for increasing it. We would like the government to help us as we’re desperate for more land,” says Hussain Al-Shaikh, chairman of GGMC.

Founded in 1981, GGMC is Kuwait’s oldest glass plant and one of the first among GCC countries to produce and sell high-quality glass containers for the beverage, food and pharmaceutical industries. It produces 120 tons per day of green and flint glass, using top-of-the-line European and American machines.

“We have five lines: three for flint and two for green. It is very rare in the world to have a plant with four lines equipped with narrow neck press and blow,” comments Al-Shaikh.

Clients include Coca-Cola and PepsiCo and GGMC exports 60% of its glass production to nearly all of the GCC countries as well as Lebanon, Jordan, Iraq, Syria, Armenia, Malta, Azerbaijan and South Africa.

GGMC feels it has the potential to grow and would like to diversify its business within the glass industry and its supporting industries. In order to do this, however, Al-Shaikh says they need to expand their current facilities.

So as to solve this and similar problems, the government has allocated a new industrial area, which according to Hussain Al-Kharafi, chairman of the Kuwait Industries Union, will be followed by another industrial city and more land availability. Hussain Al-Sayegh, chairman of Aknan Global Development for Real Estate Co., says, “There is a shortage of industrial real estate and…[the government is] building three major cities—Shigaya, Shahdadiya and Maiham—to create space for manufacturers.” This is a welcome indication of the growth opportunities in Kuwait’s industrial sector.

Innovation in
hydrocarbons through
partnerships

Oil has played an all-important role in Kuwait’s economic development, serving as both a driver and a catalyst for growth. The oil and gas industry contributed on average 53% directly towards GDP from 2005 to 2008, reducing slightly to 45% in 2009 due to the lower demand following the global economic crisis. In 2009, hydrocarbon revenues represented 94% of total government income and the profitability of this sector can be seen in Kuwait’s 12th successive year of budget revenue surplus, now estimated at a total of $300 billion, according to the Economist Intelligence Unit.

With today’s high oil prices—greatly affected by the political situation in Libya and the Middle East—Kuwait stands to gain, but the government does not view this as entirely positive. “An increase in oil prices would benefit us, but we are not greedy,” explains Sheikh Ahmad Abdulla Al-Sabah, outgoing Minister of Oil. “We don’t like to see oil prices reaching levels they have done in the past, forcing the world economy into recession. We aren’t in favor of this.”

As a member of OPEC, Kuwait is limited to producing 2.2 million barrels of oil per day (bpd), although capacity is currently 3.2 million bpd. However, country quotas can change given any number of factors, and Kuwait aims to raise capacity to 4 million bpd by 2020 in a bid to continue supplying the world’s energy needs.

The government nationalized its energy industry in 1975 and decreed that Kuwait’s natural resources belonged solely to Kuwait. As a result, international oil companies (IOCs) have been allowed little presence in the oil-rich country. These days, though, Kuwait acknowledges that foreign assistance is necessary if it is to meet its production targets in both oil and gas.

Aside from the big international oil companies (IOCs), Kuwait also welcomes partnerships with small- to medium-sized energy services companies that provide rigs, drilling, piping, transportation and a multitude of other related services.

“Kuwait is very well-endowed with hydrocarbons, so producing 4 million bpd is not a stretch. However, it might be very challenging to meet future production objectives with local capabilities, so it will be more desirable for the energy sectors to seek the support of Western know-how in specific fields to achieve those targets,” says Tareq Al-Wazzan, managing director and CEO of AREF Energy Holding Company.

Established in 2007 as a subsidiary of AREF Investment Group, AREF Energy is a local boutique and Shariah-compliant energy investment house that has consolidated itself as an ideal local partner for foreign oil and gas services companies wishing to enter Kuwait and the region.

“After comprehensive analyses on Kuwait’s future requirements, we have concluded that the goal in the years to come is to hold strong partnerships with international mid-sized operational companies interested in a joint venture with a dynamic and accountable local partner. This would give them an appropriate foothold in the Middle East,” explains Al-Wazzan.

“We are trying to represent Kuwait in seeking good opportunities, aligning ourselves with trustworthy partners and keeping our conduct of business ethical,” adds Walid Al-Hashash, AREF Energy chairman.

Currently, AREF Energy is increasing its shares in energy service companies in the upstream, downstream, environmental and power sectors not only in Kuwait, but also in the MENA region, India and the U.S. According to Al-Hashash, the company went from no contracts in 2009 to $35 million in contracts by early 2011.

Al-Hashash looks toward the U.S. for the greatest transfer of technology and know-how. “When it comes to oil and gas and the energy sector, the pioneers are the Americans. Oil was discovered there and until today, most of the products and equipment required to produce oil are manufactured in the U.S.,” he comments.

AREF Energy holds a 25% stake in the American company SynFuels, the developer of a revolutionary patented gas-to-liquid technology that reduces capital and environmental costs while increasing productivity. Other such investments and partnerships are always on their horizon.