Article - July 30, 2014
When Republic of Congo Finance Minister Gilbert Ondongo presented the draft budget for the 2014 fiscal year in October, he painted a picture of a vibrant economy in which many sectors boasted double-digit growth 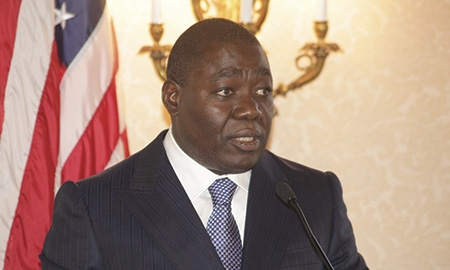 Even though oil production, which accounts for more than two-thirds of GDP, 85% of goods and services exports, and 78% of government revenues, has been on the decline, non-oil activities are growing and have been driving Congo’s robust economic growth, says Finance Minister Gilbert Ondongo.

The fact that oil production was down around 8% last year was notable but not the end of the world. Lower oil production – the economy’s main driver – and weaker domestic demand caused growth to weaken to 3.4% in 2013, according to the African Development Bank (AfDB).

Nevertheless, the Republic of Congo recognized years ago that it has to reduce its dependence on oil and develop other sectors, and that is beginning to pay off as the non-oil sector has begun to show very healthy growth.
The biggest growth in a non-oil sector was in public works, which grew by 10.5% in 2011 and 2012. Part of that growth is due to government-financed infrastructure projects, including facilities for the 2015 All-Africa Games, which Congo will host.

At the same time, Congo’s economic lifeblood, oil, has lost some of its luster. Ageing fields are producing less crude, and price fluctuations have hit Congo’s bottom line.

When oil prices fell during the global downturn, Congo’s revenues fell by 30%.

The finance minister says Congo expects to turn around flagging oil production this year and see it rise by nearly 9%. The government expects to boost oil production from 90 million barrels last year to 98 million this year. Italian oil and gas group Eni said in July that it has signed an exploration deal for Congo’s coastal basin, and state oil company La Societe Nationale des Petroles du Congo (SNPC) has said it is using hydraulic fracturing to extract reserves on some fields and reviving blocks that have been left idle by foreign companies.

Non-oil is expected to show even stronger growth than the hydrocarbons sector this year, with expansion forecasts in the region of 11%. Strong growth in the two sectors is expected to result in overall economic growth in Congo of around 10%, Mr. Ondongo says. If production begins at iron ore deposits in Nabemba, Avima and Mayoko, growth could be even stronger.

The minister is not alone in his positive outlook for Congo. Outside sources, including international ratings agencies and the African Development Bank (AfDB), are also predicting continued, steady growth for Congo, although their forecasts are less lofty than Mr. Ondongo’s.

“This macroeconomic outlook is supported by continuing state investment, the entry into production of mines, and the vigor of the non-oil sector,” the bank says in its annual African Economic Outlook report, which it prepares with the Organization for Economic Cooperation and Development (OECD) and the United Nations Development Programme (UNDP).

Both said the outlook for Congo is stable.

Moody’s said it assigned the Ba3 rating on the basis of Congo’s “small and concentrated economy that has robust growth prospects…strong fiscal fundamentals…and moderate susceptibility to event risk.”

Moody’s also stated that if major mining projects come on-stream, the republic’s economy could grow by 8% or more in the next few years.

Fitch put non-oil GDP growth above 7% this year and next. It said services grew at more than 8% in 2013, and predicted continued robust economic growth.

But to keep Congo’s economy on its current upward path, it is essential to expand Congo’s economic base and get it off its dependence on oil. Some studies have shown that at the current rate of exploitation, Congo will have exhausted its oil resources in 10 years, according to Mr. Ondongo.

While oil prices are up significantly at the moment, the government harbors no illusions that the pendulum will not swing the other way in future, and is forging ahead with its plan to broaden Congo’s economic base – away from oilfields and into other fields.