Nickel, a highly sought after commodity

Article - July 27, 2011
One of the oldest and most important mining companies in the Philippines, Nickel Asia Corporation (NAC) is also a homegrown company. 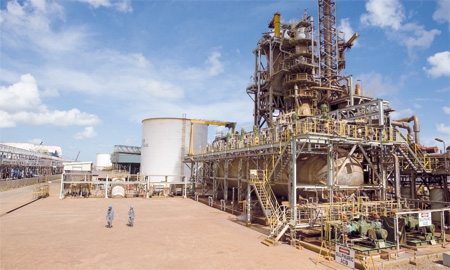 Its first subsidiary started operating in 1975, and NAC now owns a majority share in four mining operations throughout the country (one in Palawan and three in Mindanao). It also has an equity interest in a nickel processing plant in operation since 2005 and a second plant now under construction.

“We are the largest laterite nickel ore producer and we account for over half of the country’s nickel ore exports. We’ve been around for a long time and we’re a local company, and that gives us some advantages,” says Gerard Brimo, president and CEO of NAC. “Most Filipino mining companies are involved in copper and gold but we’re a pioneer in the nickel sector so we had the pick of the good properties early on, which is not to say that there are none left because there are.”

NAC took an equity interest in the country’s first nickel processing plant built by majority owner Sumitomo Metal Mining: Coral Bay HPAL, considered the best plant of its kind in the world. Due to Coral Bay’s success, NAC has once again partnered with Sumitomo to build a second processing plant, which also happens to represent the single largest investment in the Philippines’ mineral resource sector to date.

“We’re working on a second processing plant, which is quite a feather on the cap of this group. There are only a handful of these plants around the world and two of them will be with us,” comments Mr. Brimo.

The plant is due to be completed in 2013 and once on stream, NAC will be able to process the low-grade nickel ore it has been stockpiling and improve its sales volume substantially.

Although its core business is lateritic nickel ore, Mr. Brimo says NAC intends to diversify into gold and copper, two minerals found in abundance in the Philippines. This plan is already underway: in 2010, NAC bought a company from Anglo American that had four excellent claims for exploration. “I did a joint venture with them when I was at Philex so when they wanted to sell we were the only Philippine company they approached, the others were foreign companies, and we were able to pick it up at a reasonable price,” he says.

NAC’s main export markets are China and Japan. Its clients include the largest stainless steel producer in China and the largest ferronickel producer in Japan. “We have very good relations in those countries and we’re the preferred customer because we have a variety of nickel ore and we deliver on specs and on time,” explains Mr. Brimo.