Garment makers realign ‘Made in Bangladesh’ brand with quality, care, and worker safety

The 2013 Rana Plaza tragedy, in which more than 1,000 people lost their lives, put Bangladesh’s textiles industry in the global spotlight for all the wrong reasons. As the country’s top garment manufacturers target $50 billion worth of exports by 2021, they argue that such abhorrent breaches in workplace safety compliance are the exception and not the norm 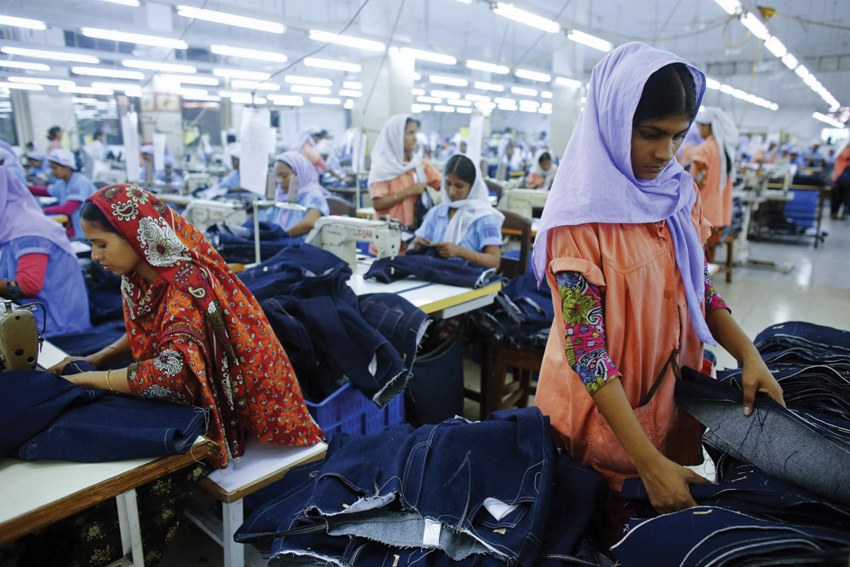 Following the first Dhaka Apparel Summit in December 2014, Bangladesh has set a goal to reach $50 billion worth of ready-made garment (RMG) exports by the time of its 50th anniversary of independence in 2021. “Proudly Made in Bangladesh” is the unifying theme behind this goal, which ambitious industry leaders believe can be achieved with the right amount of resolve and responsibility.

At present, ready-made exports represent 78% of the country’s export earnings and 10% of GDP. The sector employs young, urbanized workers, and with over 30 years of history, it is developed to a point where key decision makers have a solid sense of the industry’s potential, though large looming challenges must still be considered.

First and foremost is the lack of sufficient access to electricity or gas, according to S. M. Emdadul Islam, Director of the Babylon Group, a garment production conglomerate that currently employs nearly 12,000 people. While many factories operate almost exclusively in the daylight to minimize energy requirements, this energy deficiency puts them at a competitive disadvantage.

Beyond these shortages, Mr. Islam also adds that compliance tragedies such as Rana Plaza – a factory collapse that resulted in a death toll of more than 1,000 people – have tarnished the “Made in Bangladesh” label. When the very real possibility of political instability is added to this equation, things become even more complicated, though Mr. Islam believes that with the right approach, “$50 billion is absolutely reachable.”

“Bangladesh was a producer for basic stuff, but now we are working with brands like Puma and G-Star. I am amazed by the things we do in our factory”

Recently, the Bangladesh Garment Manufacturers and Exporters Association (BGMEA) held up the Babylon Group as an example of a company with an exceptional reputation regarding its compliance in health and safety. For Mr. Islam, who believes that the workers and the employees are the core strength of his business, this was a very satisfying way to be recognized. “From the very start of our business in 1986, we have been focused on taking care of our people,” he says. “I can now say wages are enough to ensure workers can provide three square meals a day and provide for a small family.”

After nearly 30 years in the business, one of Mr. Islam’s greatest accomplishments is having helped to move the Babylon Group up the value chain to the extent that it is now supplying top brands. He stresses that this requires an entirely new level of commitment to compliance issues because top class buyers are generally more concerned that their products be made under humane conditions, though he is quick to admit that not all of these companies follow through on their good intentions. Often, buyers ask manufacturers to invest in terms of worker welfare and safety, but are not willing to compensate the factories in a way that will allow them to invest accordingly. “This is a very unfortunate part of our business here,” says Mr. Islam. “I still have my doubts about whether most of the big companies and apparel buyers have ever thought about how responsible they themselves are with regards to their sourcing.”

Faruque Hassan, Managing Director of the Giant Group – another garment-centric conglomerate –points to a different set of challenges that must be overcome before Bangladesh can reach its $50 billion export mark in 2021. In his mind, a shortage of skilled workers is the country’s largest handicap. “There are 30,000 expats from China, Korea, and the Philippines working in Bangladesh, but right now we still don’t have proper fashion designers or proper technical people, and it’s not easy to become the world’s second largest garment exporter this way,” he says.

While India has a huge cotton supply and other countries have poly petrochemicals for the production of polyester, none of these products are produced in Bangladesh. Further adding to costs is the fact that all textile machinery, as well as most dyes and chemicals, are being imported from abroad.

The damage to the “Made in Bangladesh” label has come as a huge blow, but diligently and determinedly, Bangladeshi manufacturers have been working to show another side of their industry

Bangladesh does stand a competitive advantage when it comes to manpower, argues Mr. Hassan, but in order to increase productivity and efficiency, unskilled workers need to be trained. He cites the example of young Bengali women who represent the majority (80%) of workers in the country’s garment factories. “When they start working in the garment factories, their health improves because they have better working conditions. They’re out of the slums and able to share and communicate their problems with a support group of colleagues and friends,” he says. The potential for them to turn their lives around is tremendous, and well worth the investment in their technical education.

For Mohammed Abdul Jabbar, Managing Director of the DBL Group, improved infrastructure is a matter of paramount concern. “We need good ports, good roads, and the main thing is energy,” he says, echoing the sentiments of Mr. Islam at the Babylon Group. Mr. Jabbar also believes that sustainability is the pillar of a successful business, and he has even gone as far as to divide sustainable growth into five key areas – people, process, product, community, and environment.

He explains that although his company started in ready-made garments and then from there branched out into other sectors, the bottom line has always been workers and operators. “When I go to the factory and see the things they are doing, sometimes I do not believe it myself. Bangladesh was a producer for basic stuff, but now we are working with brands like Puma and G-Star. I am amazed by the things we do in our factory,” he says. Beyond having no doubt that Bangladesh will meet its $50 billion target by 2021, Mr. Jabbar also has great faith in upcoming generations. Already, he sees a team mentality emerging, and the realization that the DNA and vision of a company must shine through each of its employees. He urges young workers to concentrate on what they’re doing, and to have an international mindset. “They have to study and be ethical,” says Mr. Jabbar. “They can’t take shortcuts, and they have to concentrate on their work and have global knowledge – not just local knowledge. They have to know what is going on around the world and develop their own mindset in this way. They have to have vision and go after what they want.”

Mr. Jabbar’s words and conviction that generations of the future will bring a world-class manufacturing industry to Bangladesh are a heartening contrast to the recent headlines emerging about the country, many of them still focused on Rana Plaza and other deplorable and dangerous working conditions in Bangladeshi garment factories.

The damage to the “Made in Bangladesh” label has come as a huge blow, but diligently and determinedly, Bangladeshi manufacturers have been working to show another side of their industry. “Rana Plaza does not reflect all of the garment industries in Bangladesh, much like Bangladesh does not reflect Rana Plaza,” says Md. Atiqul Islam, President of the BGMEA, a trade organization that represents the ready-made garment industry through policy advocacy to the government, the defense of worker’s rights, and social compliance. Active since 1978, it represents over 4,000 member factories, 60% of them woven garment manufacturers, and the remaining 40% comprised of knitwear and sweater manufacturers. “This tragedy affected Bangladesh, and it was very unfortunate,” says Mr. Atiqul Islam, but more unfortunate yet would be to portray that incident as representative of an entire industry.

“From the very start of our business in 1986, we have been focused on taking care of our people. I can now say wages are enough to ensure workers can provide three square meals a day and provide for a small family”

Rather than dwell on tragedy, the BGMEA president prefers to stress what he sees as the strengths of the Bangladeshi garment industry, and point out the ways in which he and his colleagues are doing everything to prevent the possibility of another Rana Plaza. He explains that more than 30 years of experience in garment manufacturing have also given Bangladesh several advantages. The country’s backward linkage is difficult to compete with, as is the youth and vibrancy of its workforce, 70% of which is under the age of 40.

He states with full confidence that his country will reach the $50 billion ready-made garment export mark by the year 2021, so long as its “people, power (energy), politics, productivity, and port” all perform as they are intended to. (By port, Mr. Atiqul Islam is referring to Chittagong Port, also known as the principal seaport of Bangladesh. Handling 92% of the country’s import-export trade and over 43 million metric tons of cargo per year, it is the indisputable jugular connecting Bangladesh to the rest of the world). “If we can continue on the right path, nobody can stop us,” he concludes.

Although the general outlook for Bangladesh is positive, very recent developments suggest there may be some unexpected hiccups when it comes to reaching desired export figures. Potentially most threatening is the fact that the United States has failed to reinstate the Generalized System of Preference (GSP) for Bangladesh since it was suspended after the Rana Plaza disaster in June 2013.

“I think the U.S. should reverse that decision. It was a miscommunication surrounding an undeniable tragedy. We have learned from that and changes have been made. This is where the government has focused.” argues Salman F. Rahman, Vice Chairman of the Beximco Group, one of the country’s largest conglomerates with interests in the textiles industry.

To date, the U.S. has given no signs of revising its stance on GSP, which is essentially a preferential export scheme allowing participating countries to benefit from the tariff-free treatment of GSP-eligible imports. Although ready- made garments don’t fall under the umbrella of the scheme, some 243 other industries in Bangladesh including plastic, ceramic, gulf shafts, and carpet items do, and they all saw a decrease in exports to the U.S. following the suspension of GSP. That said, the ready-made garment sector appeared unaffected by the decision, and total exports to the U.S. are actually higher than they were prior to the disaster.

“Together with the Bangladesh Garment Manufacturers and Exporters Association, the other international partners and the brands, I am confident we are building a better and more productive ready-made garment sector and demonstrating to the world that business success goes hand-in-hand with workers’ rights and safety,” the American Ambassador to Bangladesh, Marcia Bernicat, told Bangladeshi media at the opening ceremony of the BGMEA Expo held in Chittagong. A three-day event, the expo unveiled Bangladesh’s roadmap for reaching the $50 billion mark – a goal that Ms. Bernicat described as “ambitious, but very possible.”

Few in the ready-made garment industry are likely to disagree with her predictions, and many already have a winning formula to ensure that they are met.