Article - May 14, 2014
Bahrain’s success in tackling economic challenges head on and targeting sustainable prosperity is opening economic opportunities across the board 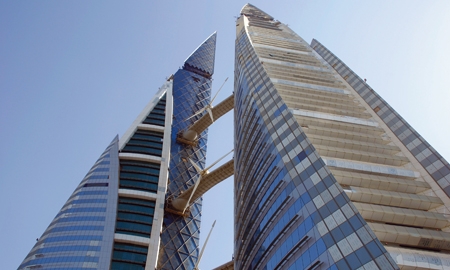 THE TWIN-TOWER BAHRAIN WORLD TRADE CENTRE, OPENED IN 2008, WAS THE WORLD’S FIRST TO AESTHETICALLY INCORPORATE THREE 29-METRE DIAMETER WIND TURBINES INTO THE FABRIC OF THE BUILDING AND IS A POWERFUL EMBLEM OF THE KINGDOM’S ASPIRATIONS
SHARE

Bahrain is different. This small island nation is adept at recognising before others the way forward and in investing resources to adapt and reshape itself to meet new challenges and changing circumstances. Nowhere is this pragmatic national trait more evident than in the business and economic structure Bahrain has built for itself – one that has successfully diversified far beyond the country’s relatively small hydrocarbons reserves to successively embrace and develop a strong and distinctive presence in many different sectors, resulting in a dynamic and often leading position in chosen areas of high-growth potential.
While 87 per cent of the government’s revenues do still come from oil and gas, this sector now represents only 20 per cent of the country’s GDP, followed by 17 per cent from financial activities and 15 per cent from the manufacturing sector. To overcome what many might consider drawbacks, namely an island location and a small indigenous population, and cleverly turn them into advantages, Bahrain has emphasised universal and high-quality education – together with an attractive fiscal environment and investment in logistical and industrial infrastructure tailored towards chosen target sectors – to bring about its successful economic diversification.
Growth since the turn of the millennium has averaged 5 per cent per annum, with GDP growing by 78 per cent between 2000 and 2012 and goods export revenues more than tripling in the decade ending 2012. Sustained investment in infrastructure to keep pace with this growth has included the Salman Industrial City and its Bahrain International Investment Park, which has so far created 11,000 jobs.

The nearby Sheikh Khalifa bin Salman Port enhances the attraction of the kingdom as a regional logistical hub, while the Bahrain International Airport is also now being expanded and modernised.
Bahrain has been an oil producer for more than 80 years, but it is still projecting increased output over the coming years thanks to the use of enhanced oil recovery techniques at its oldest onshore field, as well as to the further expansion of offshore exploration.

According to the National Oil and Gas Authority (NOGA), total output by 2020 could reach 250,000 bopd, while gas production, important as an energy source for industrial projects, is also being boosted. Major investments planned include $6 billion to increase and upgrade the capacity of the Bapco refinery and to replace the existing pipeline between Saudi Arabia and Bahrain. Total foreign investment in this sector over the next two decades is expected to reach $20 billion.

The country has the oldest financial services sector in the Gulf region and is home to more than 400 companies, covering wholesale and retail banking, Islamic finance, asset management and insurance. It boasts easy access to a regional economy worth $1.4 trillion.

Regulation is to best-practice international standards and it is ranked first among Middle East countries. With average annual growth of over 8 per cent since the turn of the millennium, the financial services sector now employs close to 15,000 people. Bahrain invested early in building a presence in Islamic finance and is now a global leader in the field.
While a substantial part of the manufacturing sector depends upon the existence of hydrocarbons as feedstock or as a source of cheap energy – this being the case with producers of refined petroleum, chemical and aluminium products – a wide cross-section of other industrial enterprises is now being attracted to Bahrain’s new industrial parks.

These include (according to the Bahrain International Investment Park) international groups such as Mondelez (formerly Kraft), Kimberley Clark, American Express, NCR, BASF, Siemens and, more recently, Reckitt Benckiser from the UK. Alba, present in Bahrain since 1968 and one of the world’s largest aluminium smelters, continues to grow its production capacity with a sixth production line now under consideration.
Bahrain’s success in attracting and retaining leading international companies has been earned by creating sound and efficient physical logistical and investment infrastructure. This has been matched by an efficient regulatory framework for business, in addition to investing in education and human development so as to provide skilled human resources.
There is, however, much more, including a culture of openness to trading with the whole world and one of economic freedom. Investors in Bahrain find no taxes on personal income, with many businesses also being exempt from taxation and subject to no exchange controls, no restrictions on repatriation of profits or capital, and very few non-tariff barriers.

There is an exchange rate peg of 0.376 Bahraini dinars to the US dollar, low inflation and a strong financial sector. In the Heritage Foundation and Wall Street Journal 2013 Index of Economic Freedom, Bahrain ranks first in the Middle East and North Africa region and 12th in the whole world.  A warm welcome awaits in Bahrain, the country doing things right, the easiest place to do business.