At the head and crossroads of Caribbean telecommunications

Article - March 11, 2013
Strategically located between the United States and South America, the Dominican Republic is a natural hub not only for regional trade, but also for the technology which runs our globalized world. And the country is proud of its status as one of the Latin American leaders in IT and telecommunications 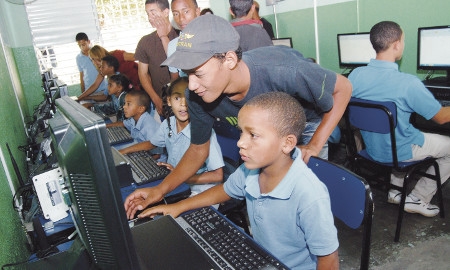 ABOUT 93% OF THE COUNTRY ENJOYS CELL PHONE COVERAGE, AND THE GOVERNMENT ENCOURAGES YOUTH TO LEARN ICT SKILLS
SHARE

Both the public and private sectors are working hard to ensure that the island nation maintains that status as they continue to invest so citizens can reap the many economic, professional and cultural benefits of high technology now and into the future.
Just look at the figures. According to the state-owned Dominican Telecommunications Institute (INDOTEL), 93% of the country enjoys cell phone coverage with close to 9 million individual units, while the number of fixed lines tops 1 million.
Internet use is also taking off, rocketing from a scant 200,000 users in the year 2000 to well over 4.5 million today, or half the entire population. And almost 50% of Internet accounts are for cell phone use.
Quite an achievement for a small nation, but perfectly understandable given the government’s dedicated campaign to guarantee that Dominicans, and especially the young, have the tools to succeed in the modern world.
Helping fuel this tech boom is the Parque Cibernético Santo Domingo, S.A. (PCSD) or Santo Domingo Cybernetic Park, a state-of-the-art technology park, just five minutes from the capital’s international airport and a regional powerhouse in the sector.
Established in 2000 to provide companies with high technology, modern infrastructure, world-class strategic, operational and logistical services and education, the park boasts 1.2 million square feet of space for tenants looking for an unbeatable development and business location.
But there is more. Since 2005, the PCSD also provides funding for those companies spurring high tech growth and training Dominicans for the industry. At the same time, management invests in international companies setting up shop at the park.
A roster of the firms, both foreign and domestic, present in the PCSD includes such names as Schneider Electric, Mann-India, Orpheus Mobile, Fluitecnik Solar, Europeenne Ingenierie Installations and others involved in sectors  ranging from alternative energy sources and electronic gaming, to software development and water filters.
The PCSD also hosts NAP del Caribe, or Network Access Point of the Caribbean, a subsidiary of U.S. company Terramark Worldwide which invested $40 million in the project that eases Internet access for Dominican users, boosts efficiency and improves service.
Another U.S. firm active in the country is Trilogy International Partners of Bellvue, Washington, through its subsidiary Trilogy Dominicana which launched the VIVA brand five years ago and is considered a pioneer in many facets of local telecommunications services.
Among Dominican consumers, it is known for high quality, instigating a significant reduction in mobile telecoms rates nationwide and exemplary customer service.
VIVA offers wireless voice and data services, along with high-speed wireless broadband, international long distance termination and origination and a new GSM network.
Multinationals like VIVA and Terramark operating in the Dominican Republic know they can draw from a deep pool of personnel trained to the highest standards in new technologies, thanks in part to the Las Americas Institute of Technolgy or ITLA.
Founded in 2000, the higher education institute specializes in high tech, technical-vocational training and English language instructions. Its core study areas cover IT, mechatronics, automated manufacturing, multimedia and software development.
“Our vision,” according to ITLA officials, “is to be an international academic reference in information technology and communications, in training entrepreneurs through the latest educational methods and contribute to the nation’s development.”
ITLA offers scholarship help to students from low income families and last year graduated 620 higher education students ready and able to take their places in the Dominican Republic’s exciting technological future.