A signal of the times

Article - March 7, 2012
For South Africa, ICT has pushed progress ahead rapidly in the past two decades, helping to level the playing field between urban and rural areas and enabling the country to better compete at a global level. 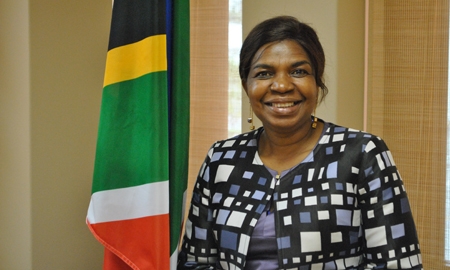 For many of the world’s fastest growing economies, transport was historically the key to developing mass infrastructure, and in turn provided support for other sectors such as construction, energy and manufacturing. ICT’s continued integration into all global economies and sectors is apparent from some of the world’s most highly profiled companies, such as Apple and Facebook.

South Africa’s development has been led under the direction of Minister Dina Pule. Since taking her post in October 2011, she has outlined very clear initiatives in order to support and develop the nation’s ICT sector. Charged with initiatives to enable the provision of a multiplicity of applications and services to meet the needs of the country, she is also responsible for strengthening the national ICT regulator, ICASA (Independent Communications Authority of South Africa Act), (2000). The regulator's responsibility is to ensure quality at affordable prices, but also to encourage perfect competition in order to provide the people with a greater choice for their services and products.

The first challenge to overcome is the conversion of signal from analogue to digital for television, allowing greater flows of information in superior quality.

“We anticipate that by March 2012, the digital signal will cover more than 60% of the population,” stated Ms Pule in a recent interview.

Having finalised the policies on digital migration, the roll-out is running on schedule and enabling an increasing amount of people, even within some of the less developed provinces, such as Mpumalanga and Limpopo, to have the same standards as those living in Cape Town or Pretoria. In supporting two of the government’s priorities, reducing the rural urban divide and job creation, the digital roll-out is proving to be a great success. In order to make digital migration a reality, boxes and antennae must be installed, set up and maintained, allowing for a flawless service. In terms of back office development, call centres will also need to be established, opening up many new vacancies within the ICT sector.

There are other areas where ICT will continue to support the greater initiatives. Increased accessibility to broadband will revolutionise South Africa’s socio-economic environment by offering a level playing field to all nationals in terms of access to information.

“It is very exiting for me to roll out broadband to those in the rural communities, particularly to help develop educational standards, in particular through our e-Skills Institute, as well as encourage small and medium enterprises to have a greater reach to their target markets,” said Ms Pule.

Up until now, many South Africans have relied on 3G technologies available on smart phones in order to gather information in areas currently without broadband services. This has actually been a positive fact as it has pushed South Africa’s mobile penetration to one of the highest in the developing economies.

In maintaining regular contact with both Ministries and the private sector, South Africa’s Department of Communications is able to keep a regular finger on the pulse of the sector and be able to react accordingly. At the most recent ICT Industry Forum, a conference designed to incorporate all the key ICT players in the market to meet with the Government, it was recently pledged that between Department and Industry, over one million jobs will have been created by 2020. In terms of broadband alone, it is estimated that 245,000 jobs can be created by the same deadline.

Through creating greater synergy and international cooperation, it is clear that the greater transparency of the sector has allowed for increased collaboration. Minister Pule cited that the global economic downturn has helped highlight South Africa as a highly competitive investment market, in particular with regards to ICT, which anticipates continued development and growth.

By combining the government’s initiatives, Ministries are able to work in coordination with one another. A recent collaboration is in effect between the Department of Transport and the Department of Communications, by combining the development of the highway and railway networks while simultaneously laying down the fibre optic cabling required for broadband services.

Minister Pule cited that while South Africa’s development is growing successfully, none of this would have been possible without the support and sacrifice made by the ANC.

“Without the ANC we would not be here. During the times when it was very difficult, the ANC was able to galvanise support from outside the country. If we were to ask how many houses were electrified in 1994, and how many are electrified today? How many engineers we had in the country in 1994, and how many engineers we have today? You will agree that the past 18 years have shown what we have always been capable of.”

As a long standing member of Africa’s oldest liberation movement, she has occupied a number of positions within the party, namely the Chairperson of the Mpumalanga Provincial List Committee in 2006 and the Provincial Secretary for the Women’s League, also in     Mpumalanga from 2007 – 2009.

When asked about her priorities, outside of the initiatives already in progress, she stated that there are 500 schools that were targeted to have broadband supplied to them. There are  currently 251 outstanding.

“If I were to reach the end of my tenancy in 2014 and have all these schools connected, I will be happy.”

With the progress being made in the domestic market, Minister Pule will be overseeing some of the most exciting transitions within the ICT sector, which will not only benefit the domestic markets and change people’s lives for the better, but also, in time, the greater continent.