The Bangladeshi government’s Digital Bangladesh initiative not only looks to transform the country into a modern, knowledge-based society by 2021, but also establish the South Asian nation as the world’s next ICT destination 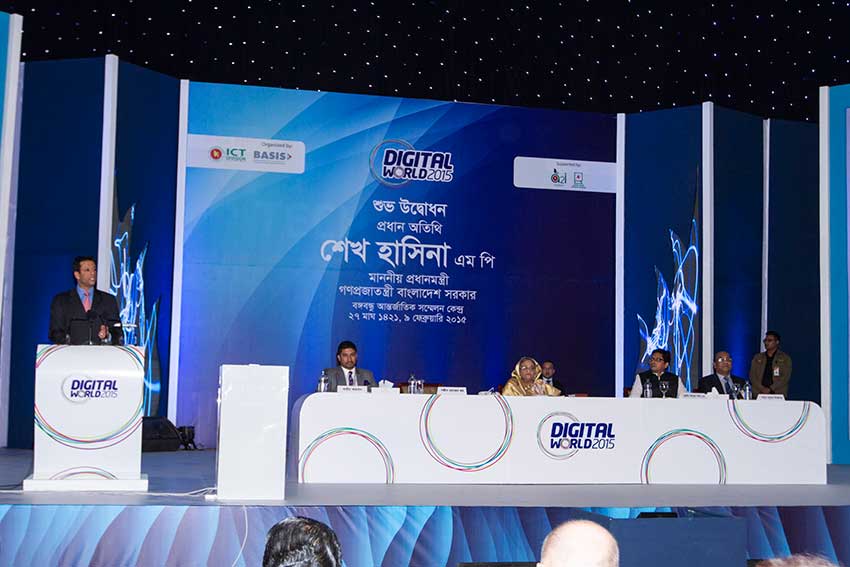 In today’s ultra-modern society, information and communication technology (ICT) has become an increasingly powerful tool in the realization of socio-economic development. Indeed, advances in ICT have been responsible for bringing tremendous welfare improvements around the world in terms of better access to information, increased employment, and enhanced public services.

Owing to a much greater availability of resources, the globe’s richer countries – such as the United States and Japan – have traditionally been the greatest pioneers and main beneficiaries of new technologies over the past few decades. More recently however, most developing countries have begun to recognize the potential of ICT as an unprecedented lever for economic emancipation, poverty reduction and human development. The spectacular rise of India as a technology powerhouse in the new millennium is a perfect case in point.

Inspired by its close South Asian neighbour, Bangladesh is now hoping to emulate India’s ICT success. Digital Bangladesh, the crux of the government’s Vision 2021 plan, is an initiative that looks to thrust the country – one of the world’s poorest – into a modern, knowledge-based society on the back of a truly world-class technology industry.

“The main pillar of Digital Bangladesh is to connect all the rural areas by broadband connectivity,” says Zunaid Ahmed Palak, Bangladesh’s Minister of ICT.  “After building the infrastructure, the next thing is developing our human resources. We are a country of 160 million people and 110 million are aged below 35,” adds Mr. Palak, who fittingly happens to be Bangladesh’s youngest ever minister. “The third pillar is bridging [the huge youth population] into the industry. We are implementing these pillars through liberating ICT.”

While the ICT sector in Bangladesh currently remains relatively small, since 2009 (when the Digital Bangladesh initiative was first put forward) the industry has enjoyed a high growth rate of 40%, and this is a trend that is expected to continue.

“Over the next four years, we are targeting [the creation of] 1 million new jobs in ICT... and in the next 2 years we will develop 32,000 young IT graduates,” states Mr. Palak.  The Ministry of ICT has also set the objective of reaching $1 billion in ICT exports by 2018; a contribution of 1% to the country’s GDP.

Though the government’s goals for ICT are ambitious, it also believes they are more than achievable, especially when considering how improvements to infrastructure over the past decade have already seen rapid developments in the telecoms sector.  Thanks to the country’s vast population and predominantly flat land, it has become a significant telecoms hub for the region and a lucrative investment for both foreign and domestic companies. With mobile phone subscribers reaching 120 million this year, Bangladesh is now the 5th largest mobile market in the world.

Under Digital Bangladesh, the government now wants to attract the same kind of investment (having set an ICT investment target of $1 billion over the next five years) in not only rolling out broadband to every corner of the country, but also in developing Bangladesh’s high-tech industries such as software development, ICT services and Business Process Outsourcing (BPO). According to Minister Palak, the plan is to make Bangladesh the world’s “next ICT destination.”

The national organization that is working to lead and facilitate this tech revolution is the Bangladesh Association of Software and Information Services (BASIS). With its vision of building a vibrant software and ICT services industry in the country, BASIS started its journey in 1997 with just 17 charter members. Today its membership stands at more than 800 companies who account for the lion’s share of Bangladesh’s total ICT revenue.

President of BASIS Shameem Ahsan says that thanks to the efforts of the government and BASIS together in rebranding the country as a digital destination, Bangladesh is now starting to get the investment that it needs to realize its digital dream.

“Bangladesh has come a long way in the last five or six years,” he declares. “A.T. Kearney (the global consulting firm) recently selected Bangladesh as one of the top 50 IT destinations in the world.  Samsung has set up a research and development sector here, as has Accenture. Major global companies such as Google, Dell and Microsoft are all outsourcing their services to Bangladeshi Companies. Much investment is coming [and] the private sector is taking the lead.” Most recently, the American firm FENOX Venture Capital announced in November that it would make a $200 million investment in Bangladesh, citing its “immense excitement in the large, young population, outstanding internet and mobile growth, and huge potential of the untapped entrepreneurial market.”  Looking to capitalize on Bangladeshi’s growing culture of technological innovation, Fenox also announced an investment in one of Bangladesh’s most successful start-ups, Priyo.com.

Many more of Bangladesh’s domestic ICT companies came together with global tech giants at an event organized by the Ministry of ICT and BASIS in February. Digital World 2015 – described as ‘the fourth largest ICT event in the world’ – brought 120 private companies and governmental organizations from 25 countries to the capital city of Dhaka for a four day conference. While the primary focus of the event was to highlight the advances of the Digital Bangladesh initiative as well as potential growth opportunities in the ICT sector, Digital World also offered the invaluable chance for Bangladeshi start-ups to benefit from knowledge transfer from some of the world’s biggest tech-firms, such as Google, Microsoft and Facebook.

“Digital World really offers a global platform to exchange ideas and to network,” says BASIS President and event organizer Shameem Ahsan.  “We have business-to-business match making sessions and the foreign companies have opportunities for investment. BASIS is also using the event to really establish Dhaka as a sister city of Silicon valley.  By connecting with different organizations, our people will learn and bring the best management practices back from Silicon Valley. We aim to be a real innovation hub in the next 10 to 15 years.”

With Bangladesh now establishing itself as a BPO hub, which the country hopes can soon rival neighboring India’s hugely successful BPO sector, as the BASIS President asserts, the next aim will be to truly unleash the country’s entrepreneurial spirit, enabling innovation to an extent where Bangladeshi start-ups will grow to one day have the capacity to become global players.

In the meantime, while the government and the country’s entrepreneurs dream big in their grand plans for the ICT sector, the main priority of the Digital Bangladesh will be to uplift the lives of everyday citizens through the powers that greater access to technology and information can bestow.  Indeed Bangladesh’s tech revolution may yet prove to be the single most important weapon in alleviating poverty in the country, and in turn allowing Bangladesh to achieve its potential as one of the fastest growing economies in Asia.