A paradigm shift in West Africa

Article - December 10, 2012
David Cameron described Nigeria as 'a dream waiting to happen' during his visit in July 2011 with the government aiming for it to become one of the top 20 economies in the world by 2020 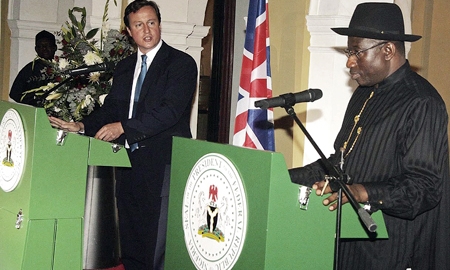 The British Prime Minister is correct. Two years after the cleanest elections in the country’s history brought Goodluck Jonathan to the presidency, the Transformation Agenda he ordered drawn up immediately on taking office is beginning to show results. One number stands out: the 7.45 per cent overall economic growth rate posted in 2011, looks set to rise to around 8 per cent when the last of this year’s data is in.

The government has committed itself to a series of programs, policies and projects collectively known as the “Vision 20/2020” initiative. The aim is to see Nigeria occupying 20th place on the world ranking of economic powers by the year 2020 (it currently is in 30th position). Don’t think that to achieve that buoyancy, authorities are counting on windfall high prices for Nigeria’s oil and natural gas: in 2011, the petroleum sector contributed just 15 per cent to GDP, which was welcome to be sure, but not enough to make it a game changer.

Indeed, the administration’s overall economic vision is illuminated by the need to diversify away from oil and offer Nigerians domestically produced alternatives to foreign imports, while creating more jobs and taking measures to unencumber the private sector’s potential for serving as the country’s principal engine of growth through deregulation, privatisation, and liberalisation.

Under the latter heading, one the biggest challenges ahead will involve the top-to-bottom privatisation of the power generating sector, which the government has marked for completion by 2015. The President has told parliament he wants enabling legislation fast tracked, and ordered an overhaul of the existing generating and distribution infrastructure to maximise its attractiveness to investors.

British firms are also involved in the overhaul and repair campaign, as the goal is for the infrastructure’s new owners to narrow their focus on increasing electricity output by a factor of 10 to 40,000MW by 2020, and to make that power available to industrial and retail consumers at competitive rates.

In September, five power plants were adjudicated to foreign bidders. Winning bids were submitted by consortiums based in 13 countries, including the United States, Russia and China, and many were from entities that are capitalised and registered to do business in Nigeria.  Major players like General Electric and Siemens are involved in the upgrade effort, while US and British aid agencies have offered to supervise the transparency of the tender process.

Why are Nigerians committing to an extreme infrastructure makeover at this particular time? Because it is long overdue, answers Mustafa Bello, CEO of the Nigerian Investment Promotion Commission (NIPC). “The oil boom in the 70s would have been the ideal time to invest; the population was much lower,” he notes. “But no effort was made to look ahead and innovate. We committed the bulk of our resources to imports and many people made money out of us and used it to develop their own economies back home.”

Mr Bello’s organisation, the NIPC, is trying to change foreigners’ perceptions about the country’s investment climate and offers a “one-stop shop” facility for obtaining customs, immigration and tax clearance. “We decided to look at policies within specific sectors and concluded that some were essentially obsolete, which is why when an investor would come to ask a question, nobody had the answer. We looked around the world to see which countries have advanced quickly and successfully in this area and sent a team to Malaysia to learn from them.”

Acting as an administrative offshoot of the NIPC, the Corporate Affairs Commission (CAC) is also trying to make it easier for outsiders by expediting paperwork. “You can set up your business from anywhere in the world using our online platform,” says the CAC chairman, Bello Mahmud. “It takes 24 hours for fast-track registration, up to five days otherwise. So far, we have registered around 875,000 limited companies and 1,865,000 trading names.”

During his July 2011 visit, David Cameron identified a host of difficult issues such as security, terrorism, illegal migration and other areas in which Britain is ready to pitch in and help. The elephant in the room is, of course, corruption. Transparency International’s 2011 report on public sector corruption in all its varieties – bribery, kickbacks, embezzlement, etc. – ranks countries from best to worst, and for a third straight year Nigeria placed 143rd out of the 183 nations surveyed. It is safe to say that not too many Nigerians were surprised.

That led President Jonathan to sack the ineffective former head of the Economic and Financial Crimes Commission (EFCC) and appoint Ibrahim Lasorda as the new chairman.  But the EFCC is not a proactive body; it can only intervene where there is evidence of corruption. So civil servants employed in different levels and departments are being trained in a new technique called corruption risk assessment, which basically involves looking for corruption in the places where it is most likely to be found, or indeed, where its existence is an open secret.

In the event, Dr Dalhatu Sarki Tafida, Nigeria’s High Commissioner to the UK, wants it to be understood that “the goal of achieving positive economic stability is of little meaning until it translates into tangible and concrete improvements in the living standards of the people.” In other words, favourable numbers are not the whole story, much less an end in themselves.

But it is still very nice when you have them. The Nigerian Stock Exchange is up by 28 per cent this year, and some 20 highly capitalised companies are considering listing. The mood is cautiously upbeat, however, as the market is still on a steep uphill climb from the wreckage of the 2008 crash that wiped out two-thirds of its value. Recovery has been slow in a global recession but regulatory reforms are finally in place and the exchange’s CEO, Oscar Onyema, has pledged to ensure that they are fairly enforced.