The myriad of construction works in Guayaquil and the neighboring town of Samborondón will have a huge impact on livelihoods. But perhaps the most important of all these works is Mi Lote, an affordable housing project that will slash the housing deficit by providing thousands of homes to poorer families for as little as $6,500 over the coming years 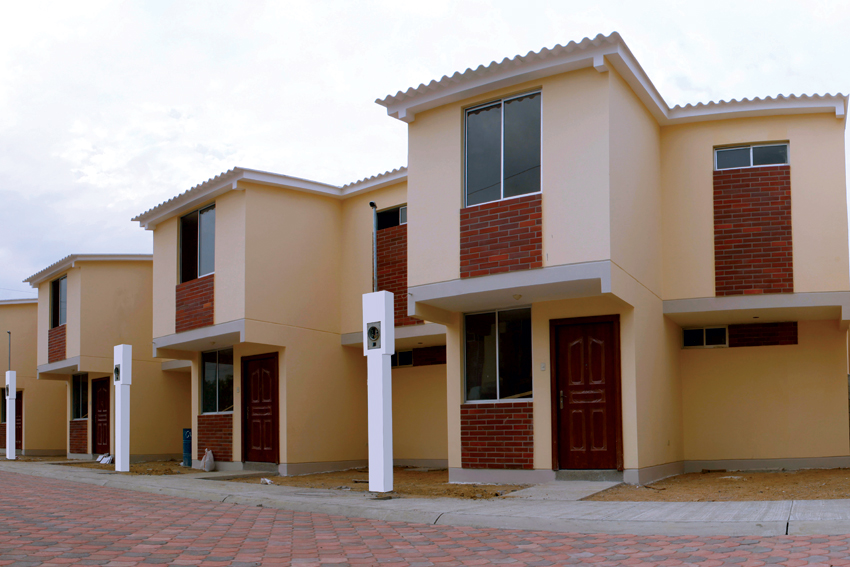 Samborondón is one of the 10 cantons of the province of Guayas. Known for its rich folkloric traditions, robust rice production industry, and very high standard of living, it is essentially an extension of Guayaquil – the largest city in Ecuador. Since 1996, the population of the region has grown by more than 500%, and all signs indicate that it will expand just as rapidly until at least 2030.

In recent years, the region has received one of the largest influxes of capital in the country, partially as the result of new investments and construction projects in the upscale La Puntilla neighborhood. Linked to Guayaquil by the National Unity Bridge and known for its exclusive gated communities, La Puntilla also boasts shopping malls, restaurants, bars, and over 130 private residential compounds. Its construction boom kicked off in the late 1980s, firmly marking the area’s transformation from rural outpost to suburban refuge of Guayaquil residents in search of more space and less pollution.

Despite its rapid residential development, the majority of Samborondón is mainly rural with an economy largely dependent on rice production and livestock, explains José Coco Yúnez Parra, the Mayor of Samborondón. “In the past, our people mainly lived from agriculture and livestock,” he says. “We are still among the largest rice producers in the nation, and we are proud to produce rice of the highest quality,” he adds, but also acknowledges the increasingly dualistic nature of the local economy which has created a larger gap between classes; a change which he suggests locals are adapting to with aplomb.

“We help one another and this is my greatest satisfaction – the unity of the canton despite the different backgrounds of our people. Here nobody is marginalized and everyone is always willing to lend a hand,” he says.

Further strengthening the bonds between the residents of Samborondón is the fact that they are very proud of their traditions and pride themselves on ensuring that their public spaces are representative of their culture. For instance, the Historic Park of Guayaquil, located on Avenida Esmeraldas, has a zoo, a botanical garden, and several carefully preserved historical buildings and theatrical spaces for celebrating local customs on national holidays.

Likewise, in 2012, the Teatro Sánchez Aguilar – one of the most modern theaters in the country – was constructed on 24 thousand square meters and at an investment of $12 million. The theater seats 1,100 people and has already lent its stage to several national and international troupes, as well as student associations, which all deepen the theater’s sense of importance to the community. “Urban development is important,” says Mayor Yúnez. “But we can never lose our cultural identity. We must respect our traditions.”

- FACTS ABOUT THE CITY -

1. Only four cities in the American continent that are not capital cities have both a US consulate and an autonomous American Chamber of Commerce. Guayaquil is one of them

2. Guayaquil reinvests 85% of its income in services for the public and in public works. This means that out of $100 received by the municipality, $85 are re-invested for the people

3. As its name suggests, this is where the historic Guayaquil Conference took place in 1822. Simón Bolívar and José de San Martín, leaders of the South American movement for independence from Spain, met here on July 26–27, 1822. Late in 1821, when San Martín’s campaign for the liberation of Peru was faltering, he wrote to Bolívar, whose army was then in possession of Ecuador, that the two of them must join forces if the struggle for independence was to succeed. Bolívar agreed enthusiastically, and the two met at Guayaquil

4. The main port (Puerto Principal) of Guayaquil is also the main port of Ecuador. Seventy percent of Ecuador’s external trade transits through this port

As the Samborondón area continues to flourish, concerns such as traffic are becoming more pressing, and in a bid to alleviate congestion, the construction of a bridge linking the area directly with Guayaquil is already in the pipeline. Once completed, the 780-meter long bridge over the Daule River is expected to reduce traffic on the National Unity Bridge, which is currently the main artery between Samborondón and Guayaquil. Though residents have expressed concerns regarding noise and dust levels during and after construction is completed, local authorities have conducted thorough studies on the environmental impact of the construction. In parallel, an Aerovía project is in the works to link the cantons of Samborondón and Duran (also in Guayas) to Guayaquil by cable car. Between 70-85% of this project will be funded by the local government, and the company that wins the bid to carry out the project should provide the rest.

In addition to the new bridge, the Aerovía project, and a new bus terminal that is already under construction, several urban renovation projects are also slated to begin. Jaime Nebot, the Mayor of Guayaquil, recently announced plans to build two new water parks and to commission cosmetic improvements including a series of public murals throughout the area to celebrate the city’s 195 years of independence. The Guayaquil Digital City Project, now in its first year, is on target in terms of the scope of wireless internet access it has provided.

Affordable housing projects in Guayaquil
Among the most exciting and potentially life-changing projects already underway is Mi Lote, a program that aims to decrease the housing deficit, ease poverty, and stimulate economic, social, and cultural progress by providing public housing at an affordable cost to citizens in need.

Beginning in 2011, the Mi Lote program is overseen by the Ministry of Housing and Urbanism which provides a one-time housing stipend to low-income families who can then use it towards the renovation of an existing home or towards the purchase of a newly constructed residence valued at between $6,434 and $30,000. All of the new properties available are at least 40 square meters large and include a bathroom, running water, and basic sanitation and sewage capabilities.

In what will soon become a satellite city of Guayaquil, phase 1 of the Mi Lote program launched with the intention to provide over 20,000 housing units across an area of nearly 400 hectares. With a municipal investment of nearly $200 million, the remaining costs of the project are being picked up by private developers who were offered land at 80 cents per square meter.

“In no other place in the country is land sold at such an affordable price,” states Carlos Salmon, the Municipal Director of Land and District Services, who reiterates that Mi Lote is a project generously subsidized by the local government, and that it has something in it for everyone. It allows lower class families a fair chance at dignified housing, helps the government ensure housing solutions for its growing population, and provides investment opportunities for willing companies in the private sector. The last 1,800 units of the project were just recently handed over to their owners, and construction for Mi Lote, phase 2 is expected to last until 2018.

“In Guayaquil people like to own their own home, not to rent. So the fact that the Mayor has introduced these social projects that allow people to own their own homes is good, because owning a home gives a person self-esteem,” says Carlos Lasso, General Manager of Fambercell, one of the companies invested in the project.

“We help one another and this is my greatest satisfaction the unity of the canton despite the different backgrounds of our people. Here nobody is marginalized and everyone is always willing to lend a hand”

Of equal importance, he insists, is ensuring financial stability and securing private investments. “For construction projects to thrive, there must be a certain economic calm,” he explains – the certainty that there are financial resources available to fund development projects and that buyers can have access to credit. Pita also emphasizes the importance of a legal structure that protects both buyers and builders so that they feel secure making investments in the future. He cites the case of the Czarninski family, which owns several luxurious shopping malls in Ecuador and is currently backing the construction of El Dorado, a commercial hub that will house the largest IMAX in Latin America, in addition to stores, hospitals, clinics, and other social services.

Ultimately, Mr. Pita explains that initiative, dynamism, generosity, independence, and the commitment to move forward with what is planned are the characteristics that best describe the residents of greater Guayaquil. “We like to do things for ourselves, and to turn existing opportunities into successful endeavors by resourcefully employing our skills.”

Similarly, Mayor Yúnez explains that in Samborondón, citizens are also making the best of opportunities to make the local agriculture industry more attractive to private investment, and to further develop its equestrian sector. He notes that the only equestrian hippodrome in all of Ecuador is located in Samborondón, and that the historical presence of the horse is very important to his region of the country, as witnessed through traditional festivities which include rodeos and horse-led cavalcades.

“We all need one another – the business owner needs his workers, the politician needs his community,” concludes Mayor Yúnez. “We are proud to be from Samborondón, and although it may take time for our achievements to be recognized on a national level, that we are on the right path is most important.”

La Aurora de Daular
The project La Aurora de Daular is located in the Chongón parish, in the “New Development Pole” of the City of Guayaquil, 60 kilometers from the beach at the foot of the new access route to the future International Airport.

The housing plan will be built along the lines of the municipal housing project, Mucho Lote 2, and includes the creation of 14,200 housing units, whose selling prices shall be, like for Mucho Lote 2, approved by the Municipality of Guayaquil.

The La Aurora de Daular project will be built in stages over a total period of eight years. Each stage or development will have an independent entrance, perimeter fence and security gate. The plots of land will have an area of 97.5 meters squared (6.50 meters x 15 meters) for in-between houses and 176.04 meters squared (11.75 meters x 15 meters) for corner houses. One and two storey houses will be built on these plots.