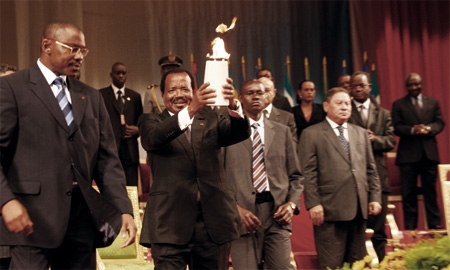 Cameroon was under German rule from 1884 until the end of WWI, when its territories came under a UN mandate and were administered by the allied Governments of France and Britain, effectively creating East Cameroon (under French rule) and West Cameroon (under British rule) – a narrow territorial strip along the Nigerian border but with the same population as East Cameroon.

A national trademark since Cameroon’s independence in 1960 and reunification in 1961 has been its success in addressing the issues of the moment. The republic’s political stability has allowed for the development of its diversified economy and the strengthening of such economic pillars as the oil industry and the agriculture sector, which today is one of the largest in sub-Saharan Africa and has made Cameroon one of the world’s largest producers of cash crops such as coffee, cocoa, banana, plantain and pineapple.

Over the past half century, the country has had but two presidents: Ahmadou Ahidjo (1960 -1982) and Paul Biya (1982 - present). It has also been under the governance of the Cameroon People’s Democratic Movement (CPDM) and it has been perhaps this factor that has most contributed to the political stability Cameroon has enjoyed since independence, despite the turmoil experienced by neighbours such as Chad and the Central African Republic.

Paradoxically, however, it is the growth of political inclusion that will most likely ensure this political stability continues forward.

As the decade of the 1990s opened, Cameroon reintroduced multiparty politics and the Social Democratic Front (SDF) was created. The move in some ways was symbolic as the ruling party won the 1992 elections and civil unrest erupted between 1992 and 1994 among opposition supporters in operation “villes mortes” – a movement met by the Government with a crackdown that resulted in a 1997 Amnesty report on the detention of political protesters and journalists.

True to style, however, Cameroon was already one step ahead. The year before it had abolished media censorship and it had made moves to end state involvement in the economy. Also in 1996, the country had been collaborating with the IMF and the World Bank on a new structural adjustment programme that included the gradual privatisation of state enterprises and improved management practices in Government, which helped to consolidate Cameroon as one of the economic success stories of the CEMAC region.

As a result of a boycott of the October 1997 elections by the three main opposition parties (the SDF, the National Union for Democracy and Progress and the Cameroonian Democratic Union), whose call for an independent election committee had gone unheeded, the Government began a decade-long reform of its electoral process. The first fruit of the reformation was the establishment in 2000 of the National Elections Observatory (NEO), which oversaw elections in 2002, 2004 and 2007.

Furthermore, in 2006 the President created Elections Cameroon (Elecam), an independent body responsible for the organisation, management and supervision of all election operations and referendums.

In 2010, laws were passed to broaden political representation in the various Elecam commissions governing voter registration, vote counts and disputes.

Consequently, although democratic reform has unfolded slowly over the past two decades, Cameroon has responded with timely legislation throughout, maintaining above all its commitment to political stability and peace – not always an easy task in a country with 268 languages.

According to Minister of Finance Essimi Menye, the nation’s efforts since independence have been focused on living in harmony.

“The spirit in which the Government has worked has been to reinforce national unity,” he says. “We are giving the events in North Africa a lot of attention. We have built a lot here on our own, and we don’t want to see our achievements destroyed. The secret of stability is living together in peace. Politics is not war; politics is about combating ideas, not violent actions.”

Although Cameroon has wisely navigated the waters of stability throughout the past five decades, treading slowly towards full democracy, however, it has perhaps encountered the moment to complete its transition. And, as the country has done again and again since its independence, it will no doubt address this issue in timely fashion.