Opening the stock market to foreign investment forms part of a broader, long-term evolution focused on modernising and diversifying the economy away from hydrocarbons 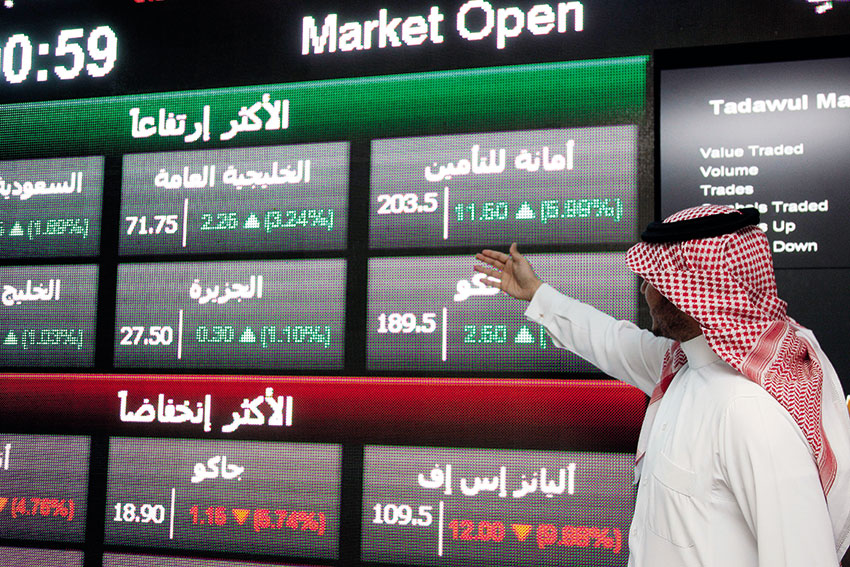 THE SAUDI STOCK EXCHANGE IS THE LARGEST IN THE REGION
SHARE

Long anticipated since it was established in 1994, the Saudi Stock Exchange has finally opened its doors to international investors. Valued at some $600 billion (£394 billion), the Saudi bourse dominates the region; its value exceeding the exchanges of Qatar, UAE, Jordan and Egypt combined. The Saudi Stock Exchange had remained one of the world’s largest to prevent foreign direct investment (FDI) before now.

On top of headline value, the Saudi market also offers great opportunities in diversity. Whilst regional markets tend to be dominated by a handful of sectors such as finance or real estate, the Saudi Stock Exchange – known as the Tadawul – is home to more than 165 companies across 15 economic sectors ranging from retail and telecommunications through to petrochemicals and cement.

Since 2011, the market has grown by some 50 per cent, outstripping most stock exchanges worldwide and well outperforming the region. Last year the index peaked at over 11,000 points, however it subsequently dropped sharply in line with oil prices and uncertainty surrounding the passing of the kingdom’s previous leader, King Abdullah bin Abdulaziz. Since oil price stabilisation and widespread confidence in King Salman bin Abdulaziz’s leadership as monarch, the Tadawul All Share Index’s (TASI) upward trajectory has resumed.

Whilst some investors associate Saudi Arabia solely with oil, energy firms are conspicuous by their absence on the Saudi Stock Exchange – there are no oil companies listed. Despite the oil price having a significant influence on the market’s performance, the top five companies come from banking, petrochemicals, telecommunications and power.

Traditionally Saudi Arabia’s companies have been in the hands of wealthy, entrepreneurial families or sole ownership of the Saudi government. Increasingly however, the trend is for such organisations to go public and open their companies up for outside investment. As well as boasting record-breaking initial public offerings (IPOs) such as the $6 billion listing of National Commercial Bank last year, the kingdom also has the most active IPO market in the Middle East.

Whilst the opportunity for international investors to participate in Saudi IPOs remains distant, the prospect of an increasing number of firms listing provides an exciting chance to gain further exposure to the extraordinary fundamentals found within the Saudi economy.

Well known for its enormous hydrocarbon reserves, Saudi Arabia’s macro-economic position is enviable. Emboldened by reserves in excess of $700 billion, the Saudi government has embarked upon a hugely ambitious program of infrastructure development – the multiplier effects of which have reverberated throughout much of the economy. Government spending combined with hydrocarbons exports delivered gross domestic product (GDP) growth of 4.6 per cent for 2014 – impressive given Saudi’s starting base of $752 billion.

With GDP per capita at $25,400 and a youthful population – some 50 per cent of which are under the age of 25 – the kingdom benefits from a strong consumer culture. Demand for services often outstrips supply in sectors such as retail, transportation and tourism. Demand for investment, as well as strategic, logistic and operational expertise is often palpable.

Synonymous with oil and gas, few are familiar with Saudi Arabia’s wealth of other mineral resources such as potash, gold, iron ore, copper and bauxite. The kingdom is actively engaged in further expanding its portfolio of resources in operation, with numerous tier one assets being developed by the state-owned mining giant – Ma’aden.

On top of this, the country’s transport infrastructure and service economy are all benefiting from billions of dollars worth of investment, contributing to the development of robust sectors in themselves, as well as facilitating further growth in a relatively untouched, but high potential international tourism sector. Social media penetration in the kingdom is the highest in the world, yet software developers and international marketers have yet to take a serious look at this highly prospective sub-sector.

Whilst Saudi Arabia’s economy stands impressively amongst regional and international counterparts, the key message is that huge potential remains for further investment and growth across a vast range of sectors. It is hoped that opening up the Saudi Stock Exchange will help marry imaginative new ideas and established expertise with the kingdom’s strong economic base, thus sustaining long-term growth for the non-oil economy. At the same time, further integrating the Middle East’s star economy with the global investment community.

The issue of when and why this change would happen has long rattled throughout the international investment community. CEO of the Saudi Stock Exchange Adel Al Ghamdi offers some context on the matter: “Our market has been open to [indirect] foreign investors for a long time,” he says. “Non-Saudi’s currently own 7.74 per cent of stock market capitalisation, as at the end of the first quarter of 2015. Our mutual funds market has been open to non-resident foreign investors since 2007, and the exchange traded funds (ETF) market since its inception in 2010.”

Opening up the stock exchange to FDI on June 15 is part of a broader, long-term evolution in Saudi Arabia focused on modernising and diversifying the economy away from hydrocarbons.

Given the legacy of indirect foreign investment in the Saudi Stock Exchange for several years, it is important to offer some insight on exactly what this change entails. The initial approach is one of caution, with access to the market limited to “Qualified Foreign Investors (QFIs)”. As defined by the Capital Markets Authority (CMA) – the lead regulator in this change – QFIs are particular institutions that meet specific criteria in terms of investment experience, capacity and skill who need to convince the Saudi authorities that they will be beneficial for the market.

QFIs by definition can only come from a select group of financial organisations such as banks, insurance companies, brokerages and pension funds and must have a minimum of $5 billion under management, but this can be reduced to $3 billion with the permission of the CMA.

QFIs must have a demonstrated track record as investors, with a minimum of five years experience being the defined marker for new entrants to the Saudi market, while an overall limit has also been set for each individual QFI in terms of ownership of the market (a maximum of 10 per cent).

At the same time, there are clear limits placed upon the levels of ownership permitted for QFIs in each company they invest with. As per the CMA regulatory framework, QFIs are permitted to own no more than 5 per cent of each company they invest in. Equally, a QFI and their clients/affiliates combined are restricted from owning no more than 20 per cent of a single listed company. Foreign ownership of any single listed company, including ETFs and swaps is restricted to 49 per cent.

A series of steps have been taken by both the Saudi Stock Exchange and the CMA to ensure that investors are kept informed about their relative holdings. According to Mr Al Ghamdi, “We have taken several steps to ensure that we can provide our foreign stakeholders with the tools they need to safely invest in our stock market. Indeed, our platform has been programmed to systematically enforce several of the relevant foreign ownership limits to help our stakeholders comply with the applicable rules. We will also be bolstering the awareness of our new stakeholders, and the capital market at large, by reporting foreign ownership headroom on our website on a daily basis.”

The key evolutionary step forward for the Saudi market that comes with this change is that investors will now be permitted to invest directly in listed Saudi firms. Although this comes with restrictions, international investors will have the opportunity to influence the way in which listed companies operate. In turn, it is hoped that this will have a marked change on how Saudi firms do business – particularly from a governance, compliance and disclosure perspective.

Chairman of the CMA Mohammed Al Jadaan summarises this package of tacit profits, saying: “There are various benefits that listed companies are likely to gain from the opening of the market. Foreign institutional investors will demand an improved level of transparency, financial information disclosure and governance practices that will positively reflect on listed companies’ practices and on the efficiency of the market in general.”

Mr Al Jadaan’s thoughts are echoed by Mr Al Ghamdi: “Further foreign fund inflows are needed, not for the purposes of liquidity, we have plenty of that, but rather for the positive behavioural influences we believe foreign investors will bring to our market in terms of shareholder activism. This helps to promote enhanced reporting, investor relations and corporate governance practices amongst our issuers.”

Moving beyond the improvements for Saudi-listed companies, it is widely acknowledged that the stock exchange’s opening will pave the way for broader benefits to the Saudi economy as a whole – in particular the country’s dream of moving away from its reliance on hydrocarbons.

Saudi Arabia has long worked hard to diversify the economy away from the petroleum sector with limited success; oil still accounts for 45 per cent of GDP, 90 per cent of export earnings and 80 per cent of budget revenues.
The kingdom’s core diversification strategy resides in growth of the private sector, with a particular focus on industries such as retail, telecommunications and petrochemicals. Opening the stock market internationally will reduce market volatility, enhance long-term strategy and planning, raise the level and quality of market research, transfer knowledge between local and international firms and enable local firms to tap into specific skills and technical know-how so as to better equip them to succeed within the overall Saudi paradigm of economic diversification and modernisation.

Mr Al Jadaan goes on to explain how the CMA is ensuring the highest standards for the kingdom’s business environment. “Saudi Arabia’s investment environment is well regulated and aims to apply international best practices to maintain fairness, efficiency and transparency so as to protect investors, boost confidence, reinforce transparency and protect the capital market at large.”

Although Mr Al Ghamdi shares this perspective, the stock exchange is also keen to use the opening as a means to reduce volatility in trading. “Individual investors make up around 90 per cent of monthly trading activity and 34 per cent of stock market ownership,” he says. “Whilst this dynamic has brought significant benefits to the exchange in terms of liquidity, it has also served to produce moments of perverse market volatility. Ultimately this is at the heart of why the QFI framework was specifically customised to attract sophisticated longer-term value investors, who are more inclined to see through the fog of short-term volatility and react to opportunities as they arise.”

While some would loosely connect the recent decline in oil prices with a sudden demand for external liquidity from the Saudi market, this story goes back way further than that. The 2005 World Trade Organisation accession is just one of many indicators to the country’s form vis-a-vis international financial integration.

Nevertheless, the kingdom remains an enigma for most, and with that always comes uncertainty. As the Saudi market opens up, it appears that a sleeping giant is finally awakening. Saudi Arabia dominates regionally and is one of the world’s most exciting emerging markets. The fundamentals are clear; the world is again being welcomed to join in the kingdom’s success.