Interview - February 14, 2014
Founded in 1958, the Kuwait Chamber of Commerce and Industry (KCCI) is a non-government institution representing business establishments in Kuwait. As the chamber continues to act on behalf of businesspersons and industrialists in the country, board member Ms. Wafa Ahmad Al-Qatami talks to United World about changing economic and commercial regulations, the improving business climate, the rise of the country’s private sector and her pride at becoming the first female member of the iconic institution. 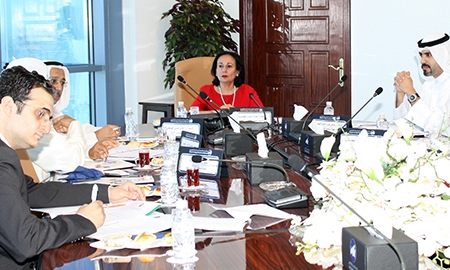 MS. WAFA AHMAD AL-QATAMI | BOARD MEMBER OF KCCI
The State of Kuwait has been blessed with two natural resources – its oil and its people. But the latter has not been developed to its full potential because the country has relied on the former much more. Since you support the privatization of Kuwait’s economy and considering your work experience in the Kuwait Chamber of Commerce and Industry (KCCI) as well as in the private sector, you are well aware of the social, economic and political aspects of Kuwait. What do you believe Kuwait needs to do to fully develop its potential?

There are a lot of steps that need to be taken to improve Kuwait’s resources, so as not to depend so much on oil as our main source of income. We want Kuwait to become a financial hub, so we need to change some of the economical and commercial regulations, which is being done. So I think we are moving in the right direction.

However, in my opinion, we need to move fast and the Government needs to apply the laws and take the right decisions to help the private sector in order it to progress in the right direction. It needs the support of the government through the implementation of suitable laws that can encourage foreign and Kuwaiti businessmen and investors to do business in Kuwait, any investor needs the right laws and regulations for the protection of their investments.

Of course, I support privatization of the Kuwaiti economy because private sectors have always played a big role in the economy, but unfortunately this has been delayed for different reasons. We should move fast towards privatization. For example, we have been waiting for the privatization of Kuwait Airways for a very long time. It used to be one of the best carriers in the world. I remember we used to fight to get one seat in Kuwait Airways about 10 to 15 years ago, but now a lot of people do not prefer to fly by Kuwait Airways because it is not as it used to be and the disputes between the Parliament and the Government have delayed the privatization of this company and others and this in return is costing money and affecting the image of Kuwait.

Any necessary decisions and plans to improve the business environment of Kuwait must be shared with the private sector because they have the experience and they are more efficient in dealing with any obstacles they face and how to deal with it. Also we are blessed by the fact that most of our population is well educated. So I believe it is also important to put the right person in the right place. We have many experienced individuals that we can benefit from their experiences by allocating them in the right positions. We must not employ people for political reasons or because they are from a particular tribe or political entity, we must mainly consider their experience.


Since the wave of popular uprisings that swept across the Arab World in 2011, there has been a marked decline in foreign investments in the region. As a businesswoman with a global reach, what are your impressions regarding international investors’ confidence towards Kuwait?

Kuwait remained stable politically in spite of the instability in the surrounding areas. It did not experience the kind of uprisings that were seen in Bahrain, Syria, Lebanon or Egypt. However, Kuwait was affected by the crises in the global markets as it is an active player in this market. So I think foreign investors stayed away from the area where there were some political uprisings and instability, but in the case of Kuwait, I think the confidence in the Kuwaiti market is there. Investors were waiting for the changes of some of the laws that give more benefits for foreign investors to do business in Kuwait and those laws are already implemented.

In my opinion, one of the main reasons for the delay was the dispute between the Parliament and the Government. Many projects were about to be implemented but then there were some disagreements about how, how much, where and when. So considering the present situation, I think we must review those plans to give priorities to certain sectors of economy because some of the projects have already been delayed especially those that are very important for the country such as infrastructural projects for building roads and new cities, which is very important because many young Kuwaitis are waiting for housing. There are also important projects for building hospitals and universities that have been delayed. Education is especially a core factor for the development of Kuwait. The plan must be reviewed to check what projects are of higher priority for the benefit of the Kuwaiti citizens and the Kuwaiti economy and then execution should not be delayed.

You said Kuwait aims to attract not only financial investors but also those with the right knowledge and technology. What are the challenges faced by the private investors here in Kuwait and how does the KCCI aim for possible reform in this aspect?

KCCI has held many conferences on how to attract foreign investors to Kuwait and the opportunities it offers. However, KCCI is just an advisory body; it cannot take any decisions but can only give advice to the government and the institutions related to foreign investment. It has always been concerned about reforming the company and foreign investor laws, and other important laws related to the economy which had already reformed.

The formation of the Kuwait Direct Investment Promotion is part of the steps that Kuwait is taking to encourage foreign investors so that they have access to the Kuwaiti market within the framework of the laws of Kuwait. They can come to Kuwait with any business ideas in any field, and they will be given some tax advantages or provided with land for building their factories, for the first ten years they will be exempted from paying tax at the ports to bring in materials in order to help the foreign and Kuwaiti investors. However, in exchange for these advantages to the investors, the government is expecting from them to train some Kuwaitis, bring new technologies to Kuwait and recruit some Kuwaitis in their projects so that they can obtain the knowledge and technology to start their own businesses. Even a Kuwaiti investor has to recruit some Kuwaitis who have to be trained so that they are specialized in that sector or field in which the company is doing business in Kuwait.

What is your opinion about the importance KCCI has had in increasing the power of the private sector in Kuwait?

KCCI is the business front of Kuwait. If there is any law that it thinks will not benefit the business arena, it will try to pass their concerns to the Government or the Parliament. Also KCCI always held Seminars to discuss different matters in different fields and give their point of view of what they think should be done. Therefore, KCCI is playing a big role in promoting the private sector interest in Kuwait. We also have in the KCCI a center for training where we hold seminars for young entrepreneurs about how to start business. Through such seminars, we guide them on what they would need for their businesses, what they should expect and how they can carry out their businesses.

The business environment is considered to be dominated mainly by men globally, which can be even more so in a Muslim society. What kind of responsibility comes with being the first female member of such an iconic institution as KCCI and what are your feelings about this?

First of all, I feel very proud to be the only woman among 23 men on the board of KCCI. I believe Kuwait gives equal opportunities to both men and women – as long as they can prove themselves. And this is not only in the private sector. There are female ministers, parliamentarians and ambassadors. Kuwait is not very male-dominated because women do play an important role in Kuwait. Kuwaiti women have been always responsible and involved in the economy of Kuwait whether on a small-scale as a homemaker or on a bigger scale.

I felt very proud when I was elected to be part of the Board of Directors of KCCI. And I had promised myself that I would try to assist the members of KCCI and do for them whatever I could for their businesses and protect their interest.