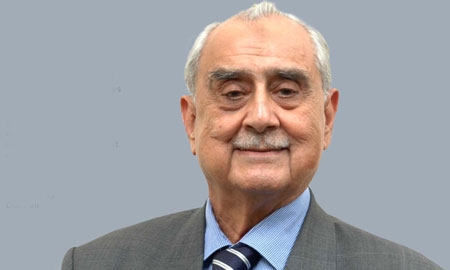 SYED BABAR ALI | PHILANTHROPIST AND BUSINESSMAN
With this first transition from a democratic government to another, there are many people that say that Pakistan is at a new beginning. Do you think this is actually a new beginning for Pakistan or is this just a repetition of history?

I think it’s, under the present circumstances, a new challenge, because as you’ve already learned, this is the first time that the government from one party has transitioned to another party in a very orderly manner, which is a good beginning and we hope that the new government will rise up to the occasion and meet the expectations of the people who have voted for them.
How do you feel the confidence of investors might change with the stabilization of democracy?

The government has to demonstrate the ability to govern properly, which means line order, which means improvement in infrastructure, it means improvement in governance. They are talking about it but they have to demonstrate, and they have been there only for three months, so the next coming months will show how much they will follow their sayings. You know, the politicians say one thing and they normally don’t follow it up by action. And so this is a challenge to the people in Pakistan that they have to come up to the people’s expectations and they have to deliver what they have promised.
What are the sectors in which you would be looking to invest if you were a foreign investor?

The good news is that we are 200 million people, it’s a large market, and at least 20% of the people have disposable income, which means about 40 million people and 40 million people is as big as one of the largest countries of Europe. And they have a standard of living, which is as good as in any European country. We don’t want to ignore the other 160 million people who are less affluent, but they still need food, they need clothing, they need other things, so there’s an opportunity for people to meet their needs by having manufacturing or other facilities
I would like to go into the packaging industry. Why would a company such as Tetra Pack come to Pakistan and revolutionize the whole packaging industry. In the times that are running today, is this still possible?

Tetra Pack is owned by the Rausing family; they were owners of the first packaging company in Sweden. Fifty years ago, they came to Pakistan to develop with us packages the concept of selling liquid food, especially milk, in a package, and it was quite a challenge because people would not believe that you had pure milk in a carton, without refrigeration for many weeks, and it would not go bad. They said it had this chemical in it, that it’s this and that.

So it required a lot of promotion and marketing and effort to persuade people that this milk was as good as fresh milk. And better because there was no refrigerators, its quality was standard. This was the first time in the history of this country when a poor person could buy pure milk. The rich man always had his own cow or his own buffalo. But this is the first time a poor person can buy pure milk from Karachi right up to the Chinese border.
Why do you think they chose Pakistan? How did you bring them?

I met them in Sweden and I said: why don’t you come and look at the opportunity. They were selling packaging from Sweden to Pakistan, not Tetra Pack. Tetra Pack was not on the field. This was in the general field of packaging. And I said: you come over and see, there’s an opportunity. There was no packaging industry in this country, this was the first packaging company in Pakistan, and subsequently a lot of other companies have come in.
When David Cameron came here, he was the first visitor to come and see Prime Minister Sharif, he pledged that UK would double its trade with Pakistan—almost 3 billion pounds. Where do you think there could be closer cooperation between the UK and Pakistan?

Traditionally there is a lot of cooperation, collaboration, interaction, I mean, when anybody, generally speaking, wants to go abroad, they want to go to London. London’s the Pakistani’s first place in Europe, because of the language, of historical relationship. There are I would imagine more 1 million Pakistanis living in the UK.

There is a general emotional attachment to this country. So there is a good opportunity. It’s easier to trade with people who understand your language, your law. Our law is based on the English law. So those things are there to promote it, but we’ve got to make sure that we have the right product to sell. People won’t buy Pakistani because they like Pakistan. They’ll buy it because the quality is good and the price is right. So we want to make things which are needed and which are value for money.