Our goal: to use 60% locally produced raw materials in our production processes 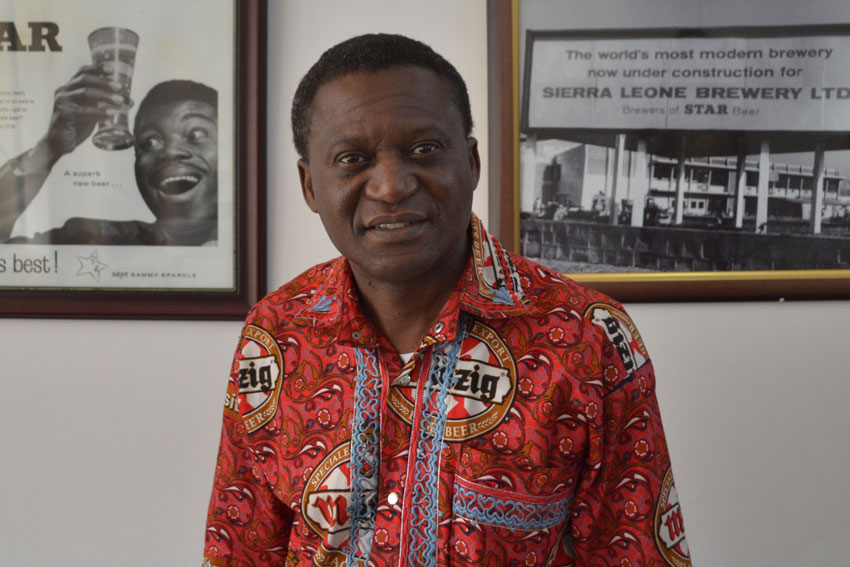 One of the main objectives of the Agenda For Prosperity (A4P) is to attract and diversify FDI to the country and boost private sector investment, now estimated at only 10% of GDP. Sierra Leone Brewery Limited (SLBL) is a good example of successful attraction of foreign investment as part of the Heineken Company. What sectors do you consider is the potential of the manufacturing sector, especially the food and beverages industry? What regulatory reforms would you consider that are required to develop a stronger industrial sector in Sierra Leone?

It is our strong belief that the agricultural sector will boost the manufacturing sector of Sierra Leone, especially if the manufacturing sector is enabled to invest and utilise local raw materials to a significant level in their processes in order to produce high quality products, satisfying consumer demand and reducing dependence on imported products. This will ultimately yield a multiplier effect across the value chain thereby providing opportunities for local entrepreneurs and contributing to private sector growth. Sierra Leone has a huge agricultural potential due to its vast land and rain forest, I do believe that the private sector will play a key role in our GDP growth in the coming years.

With the Finance Act of 2016, it is clear that government is committed to its industrialization program and to boost Sierra Leone as an investment destination. The enactment of the Finance Act is a landmark move and a positive regulatory icon to develop a stronger private sector. The provisions of this Act encourage the development of the local industrial sector especially the beverage industry. We wish to see the Finance Act and Budget provisions implemented in full as this will make the local manufacturing industries stronger.

SLBL was incorporated in 1961 just after Sierra Leone’s independence from the United Kingdom. Production commenced in 1962. HEINEKEN International has been a part of Sierra Leone Brewery Limited and had been in control of the technical side of the business since our inception. However, as some of the initial shareholders such as CFAO, UNILIVER and SCOA sold out their interests in the business, HEINEKEN took up some of these shares together with Diageo (Guinness). In 2008, SLBL became part of HEINEKEN Holding who were then the majority shareholders of the company.

HEINEKEN believes in the growth of Africa and especially in Sierra Leone. Being a part of this world class company has offered our company and our staff immense benefits including the provision of a highly professional, healthy and goal oriented work environment. Developing local leaders through internationalization, investing in the latest technology to produce high quality brands, innovation and community development have so far been some of the major benefits of being consolidated with HEINEKEN International.

With a vision that aligns with HEINEKEN International to “Brew a Better World”, SLBL introduced the Community Revenue Enhancement through Agricultural Technology Extension (CREATE) Project to support the local growth of sorghum to be used as an active ingredient in the production of our local brands. It is our global aim to use 60% locally produced raw materials in our production processes. Currently, sorghum is a viable commercial crop being grown all over the country and creating a reliable source of income to over 12,000 farming families. Certainly, the multiplier effects of this on the local economy is huge. We have received support from HEINEKEN International, the Dutch Government, European Cooperative for Rural Development (EUCORD) and Sierra Leone Agricultural Research Institute (SLARI). Thanks to our supporters, our sorghum extension project is fully funded until 2019. We hope this will sustain and stimulate growth in the local agricultural sector. As a confirmation of our commitment to “brew a better world”, we introduced a 100% sorghum beer – SALONE BEER - in December 2016 with the expectation that this will revitalize and revolutionize the entire agricultural landscape in terms of sorghum cultivation to bring in sustainable growth and contribute to the government’s Post Ebola Recovery Priorities.

SLBL is the company manufacturing Star Beer, undoubtedly one of the symbols of Sierra Leone. What are the values you would like SLBL to be associated with? What is the potential of exporting Star Beer and other of your products internationally, specially to the British market once the Brexit process in concluded?

SLBL wishes to be identified as a strong partner for growth and development in Sierra Leone, producing a high-quality brand that brings enjoyment and happiness to our consumers. We want to continue to be a responsible local manufacturer contributing our own share to the economy, creating employment for Sierra Leoneans, producing in a safe and clean environment and making adequate contributions to support our corporate social responsibility programmes.

As the manufacturer of one of the country’s national symbols, the Star Lager Beer, Sierra Leone Brewery Limited is working assiduously to adequately cater to the demands of the local market by continuously delivering high quality brands brewed with international standards. It is our aspiration to export our products internationally in the nearest future.

Mr Ngana, you have been the Managing Director of one of the most important manufacturing companies in Sierra Leone. What is the legacy that you would like to leave now that your time as Managing Director arrives to its end?

I want to be remembered as a champion for change, who through all the challenges faced by the company, was able to turn around the story of Sierra Leone Brewery Limited. I want to leave a legacy of resilience and survival and that despite the damning period of the Ebola outbreak and its effect to our business and the nation as a whole, our company stood the test of time under my leadership and with the support of the new regulatory framework set up in the Finance Act of 2016, the fortunes of our company is becoming brighter.

In a bid to strategically position SLBL as an innovative company, we can now proudly boast of a company that has increased its brand portfolio considerably with new products and improved packaging. We are committed to continuously invest in the product and packaging innovation. It is our aim that these innovations will satisfy our consumers and create more value to the business.

I also wish to be known as a champion in pushing the investment implementation plan of SLBL and today our Company is stronger to face the future with increased demand and consistent quality of our products. I have been privileged to successfully manage SLBL during one of the deadliest crisis in the world – the EBOLA Virus Disease.  In five years from now, I wish to see myself creating value, transforming and changing the fortunes of businesses whilst contributing supporting community development.

What is the final message you would like to convey to our readers?

SLBL has been with Sierra Leone for over 54 years, it has suffered damages and other harsh conditions during the ten-year civil war, harsh trading conditions thereafter and the recent Ebola Virus Disease outbreak yet with resilience and perseverance, we continue to serve our nation diligently, delivering fresh products at high quality and affordable prices.

We commend the government for taking the right direction, especially in the implementation of the Local Content Policy agenda, in promoting industrialization which will speed up the growth of the economy, create entrepreneurs, eradicate poverty, professionalise farming and ultimately increase tax revenue.  I must say I was happy to be a part of making history and that in itself has been a fulfilling endeavour.