An example of Bahraini diversity

Interview - March 27, 2014
Operating in key industry sectors and market segments such as automobiles, heavy equipment, consumer electronics and construction, Y K Almoayyed and Sons is an example of one of Bahrain's most successfully diversified companies. In an interview with PM Communications, Managing Director Ms. Mona Y. Almoayyed talks about how the company operates in line with the country's Vision 2030, its dominance in Bahrain industry and its expansion into the GCC region 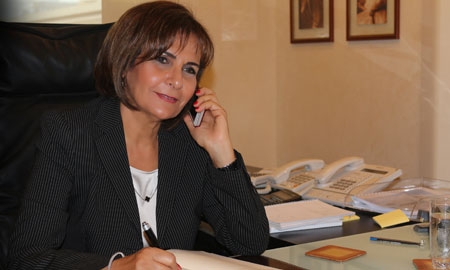 MONA Y. ALMOAYYED | Y K ALMOAYYED AND SONS MANAGING DIRECTOR
Our main focus is Vision 2030 and the celebration of UK-Bahrain bicentennial relations. Y K Almoayyed is contributing a lot towards both of them, by empowering and employing locals and foreigners, raising the quality of life of Bahrain. We know that your father had a very strong connection to the UK about 70 years ago. What is your insight in regards to V-2030?
Y. K. Almoayyed & sons is a Bahraini company working towards the same line as vision 2030 of the Kingdom of Bahrain. We are both focused on sustainability, fairness and competitiveness. We try to be transparent in our dealing with our customers and employees. We do believe in training our employees and developing career paths for all of them, to be promoted to higher positions in the future.

The aim is that by 2030 Bahraini employees will be the preferred employees for our jobs. The aim of Bahrain vision 2030 is to transfer the economy from dependency on oil to a productive, globally competitive economy driven by the private sector- an economy that raises a broad middle class.  At present 30% of our employees are Bahraini and we aim to increase this percentage by 5% yearly; we employ foreign workers because we cannot replace them by locals for the time being.

Bahrainis don’t want to do the lower-skilled day to day jobs. However, we are trying as much as we can to have as first choice Bahrainis. We don’t want Bahrainis to do just the day to day work we want them to be at a managerial level even if we had to spend money to send them to universities, to help them become more educated. We also try to spend a certain percentage of our profit on charity to help people who are less fortunate than us and make them happier. We are lucky that we do not pay any tax to the government.
The portfolio of Y K Almoayyed is very diversified, it has interests in many sectors of the economy of the country, thus we would like to hear your opinion and outlook on the performance of the different sectors of the economy, which ones are doing better and which sectors are the most promising for the future?
As a group we are diversified because Bahrain is a small economy and therefore you need to have a wide range of products.  Our biggest division is automobiles for Nissan, Ford, Renault and Chinese Foton and heavy machineries. We are the biggest supplier of electronics to the Bahrain`s market.  We are dealers in building materials, furniture, security and fire systems.

We are one of the biggest contractors and cement mixing company. When we first started we couldn’t go to any GCC country so my father went to any line which he thought he could open up, electrical, etc. this is why we grew big. In a small country you can’t just be specialized in one thing because then you cant grow as big.

Nowadays going into other GCC countries gives us more scope to be more specialized like in electronics, we have a branch in UAE, and Oman.  In the past 3 years, when the crisis in Bahrain in February 2011 happened, some areas went down completely, construction went down by 50%, cement mixing was not doing well at all because less people were constructing buildings in Bahrain.

However, before the crisis, these were the best sectors. We are compensated by automobiles. In the past 3 years the sale of automobiles have doubled, electronics is doing well, furniture suffered a little bit. Overall we are down by about 10% compared to before 2011.
In terms of creating new opportunities in the market, when your father started 70 years ago, he had to be a visionary, going to a country like the UK, seeing what is available and not just bringing it here but adapting it to make it desirable and useful for a country like Bahrain. Given your father’s legacy, how are you currently looking for new opportunities?
My grand-father was a pearl merchant so my father, in the 40s, looked around because the pearl business was going to die so he went into electrical. Now I feel it is the time for us to go into production, industry, that’s the reason why we were in India.

We would like to have joint ventures with British industries to produce things in Bahrain. It is very sad that Bahrain does not produce much. Everything is imported which is not good for the economy. The import is more than the export so we are looking into the idea of putting our money in production as we are lucky to have the petrol prices subsidized, there is no income tax, no tax on raw material. We have huge markets, the USA and the GCC countries. This is the direction we are studying and going towards.

We want to increase our portfolio in all the GCC countries like Saudi Arabia where we have not developed the market much. Being Bahraini I can now start business in Saudi Arabia, I don’t need a sponsor.
When we think of Bahrain we should not think only about an island with 1.2 million people but we should think about the Eastern Province and the greater northern Gulf. This is the sort of outlook we are trying to get for Bahrain which sometimes we feel that people don’t realize.
True. People think it is a small island but Bahrain is part of the GCC whose GDP is $1.3 trillion. I was reading an interesting article, which I printed it for you, about how much the Gulf countries grew in the past 4 years, the GDP grew by 68%. It is a growing economy and with our free trade agreement with the USA we have all the USA market to export to. The other advantage of Bahrain is its central location, being just one hour away from all the GCC countries.
Let us talk about the compromise that this company has with the society, not just as a matter of charity but as a responsibility. Your contribution is targeted to specific aspects because, as the major entrepreneurs of the country, your family knows what the necessities of the country are and how tackle them directly. In this case we would like your perspective on what are necessities that you have found in Bahrain and how are you contributing to solve the problem?
We are trying as much as we can to spend money on health. In Bahrain we are lucky to have free education and free health. We also have social security, which is not available in most of the Gulf States.

The government is burdened with many expenses so as much as we can we are trying to target health: we built a centre for kidney dialysis, a centre for drug de-addictions, we are looking at new ventures with the Ministry of Health to put more money into health. We are in negotiation of making another kidney dialysis because my father died of kidney failure so we are very passionate about this cause.

Having kidney problems is very common is this part of the world thus we want to help people. We also have other activities, we started in our company a programme called Edmaj which in Arabic means to join, to involve our employees not only by giving money but to help in the charity, some Fridays they go and clean beaches, sometimes they go to the orphans or old people homes to help.
Bahrain prides itself for being such an open country due to its 5,000 years of history of being open to foreigners. So when we speak about migrant workers, we also have to speak about the efforts to integrate them in order to enrich the culture of Bahrain.
Yes, it is very important. I think you should meet the Indian ambassador to Bahrain, he amazed me when he said that out of all the GCC countries Bahrain is the kindest towards their migrant workers. We have the society which helps them. They found out that by doing a survey. He was talking in favour of Bahrain which is good.
I was the Chairperson of the Bahrain Business Women Society for 6 years (3 terms), I believe in empowering women, including them in Board meetings in public companies, Chamber of Commerce. We did a big victory in the past election, for the first time in the history of Bahrain I was the first woman to become Board member in the Chamber of Commerce in 2001, the next election 1 woman got a seat, last election it was 4 women. It is a big step for Bahrain, women has to work twice as much as men to be recognized. Even me, as a daughter, I feel that my father always favoured my brothers.