Akira Kiyota, Group CEO of the Japan Exchange Group, Inc. (JPX) explains the company’s strong desire to raise the corporate value of the listed companies through its new Corporate Governance Code (since June 2015) and the appeal of the new JPX-Nikkei Index 400 to investors. 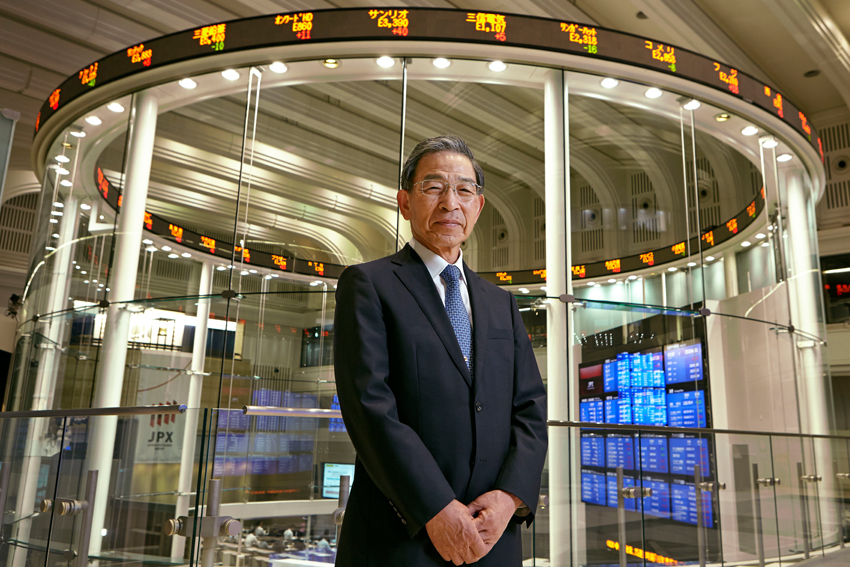 Regarding the Nikkei 225 Index, back in November 2012, when Mr. Noda was the Japanese Prime Minister at the time, he had closed off the parliament which led to the beginning of the Abe administration. In the Nikkei 225 Index, the average was 8,660 yen, but as you mentioned earlier, this year between June and July, the index was almost 20,800 yen, so that’s a 2.4-fold increase in about two and a half years. So what led to this increase in stock values? Abenomics consists of three arrows: first being the aggressive monetary easing, second being flexible fiscal policy, and the third being the growth strategy that encourages private sector investment. And if you read this policy in writing it’s difficult to get a good grasp. But to explain the stock price indexes’ increase, it is the impact of the aggressive monetary easing, known as “Kuroda Bazooka”. This aggressive monetary easing policy has eased economic deflation fears and led to a weaker yen.

Now, the mindset of the CEOs and companies that have been suffering has transformed completely, which led to a great increase in the profits of the companies, as well as the weakening of the yen. The Japanese fiscal world was able to exit from the mindset of deflation with the first stage of stock prices rising. The company profits rose as a result of the weakening of the yen, but at the same time, import prices went up, which led to the increase in the consumer prices as well.

The second arrow, which is the flexible fiscal policy, has turned around the trend since the Great East Japan earthquake. When this happened, there was a great demand in spending for the reconstruction of affected areas. Mr. Noda’s administration policy has suppressed this spending in order to preserve the healthy state of the fiscal balance, but the current administration policy is to invest even if it temporarily may have a negative effect on the fiscal state of the national budget; so this is the new change in policy.

One of the key examples of this policy is called the Japan National Resilience Policy, which aims to make solid and durable infrastructure, which can withstand national disasters. As a result, this created new demands, businesses, and work for manufacturing industries, thereby stimulating the entire economy.

So these first and second arrows have been recognized to make a big impact on the market; however, regarding the third arrow, which is considered the most important arrow, people have been saying that it is taking quite some time to shows its effect.

Since the government decided to implement these first and second policies, it could be executed right away; but the third arrow was something that could only happen if the private sectors acted on it. The core issue of Abenomics is to make the private sectors act on their own and to help the Japanese economy grow through the growth of the corporations. The first and second arrows of Abenomics were simply an ignition to kick start this positive cycle, but the final key point is the third arrow with the acting of private sectors in Japan.

The government gave themselves the task of setting a stage for the private sectors to be able to act on their own, to aim for the growth. At the time, when the Democratic Party was in charge, it was said that the corporate activity in Japan faced six challenges, and the current government has been solving them one by one. Abenomics is aiming for comprehensive positive cycle, in which companies will act upon in order to increase their corporate value, which in return increase their profits. Then, by companies adding value, the stock price will rise, which will give a positive effect to the Japanese economy as a whole, and the companies’ profits can be returned to the employees, shareholders, and government through taxes.

Abenomics has been preparing the private sectors to grow and for what they are demanding. Last year in February, the Japan’s Stewardship Code was established and released, where institutional investors appropriately discharge their stewardship responsibilities with the aim of promoting the sustainable growth of companies. Also, we formulated the Japan’s Corporate Governance Code, which strengthens companies’ self-motivated actions so as to achieve sustainable growth and increase corporate value over the mid- to long-tern. We have the two codes as ‘the two wheels of a cart’ to make sure that the sustainable growth of companies be promoted by both sides of investors and companies.

This is linked to my next question about the JPX Nikkei 400 Index and it is also in line with the Corporate Governance Code that entered into force in June 2015, which are both vital to the success of Abenomics and corporate reforms. What are the expectations for the JPX Nikkei 400 Index? In your opinion, is the private sector doing enough to embrace these reforms?

Let me explain about the JPX-Nikkei Index 400. The JPX-Nikkei Index 400 is composed of companies with high appeal for investors, which meet requirements of global investment standards, such as efficient use of capital and investor-focused management perspectives. This index will promote the appeal of Japanese corporations domestically and abroad, while encouraging continued improvement of corporate value, thereby aiming to revitalize the Japanese stock market. Of course, some companies have good governance and high consciousness of raising corporate value, but on average the Japanese companies are insufficient in this aspect.

What is the role that the Tokyo Stock Exchange plays in sending a message of confidence, reliance and the stability of this economy?

Geographically speaking, the Tokyo Stock Exchange is the earliest to open in the world in a day. While the countries in Europe and US have their markets closed, Japan’s market is open.

Japan is a developed country with a very liquid market. This makes the Tokyo Stock Exchange ideal for investors. Tokyo Stock Exchange has a very high number of listed companies as well as market capitalization, and is number three in size, so it is very attractive to foreign investors. The listed companies have fair and transparent accounting, so they are trustworthy companies to be invested. Also, because Japanese market has been globalized for a very long time, there are many options for investors to invest in, since there are many listed Japanese companies that are on top in terms of technological advancement.

JPX will continue to implement measures aimed at improving the corporate value of Japanese companies and revitalize Japan’s equity market.

Also, the trading system employed by TSE is very stable and has high speed. To respond well to the global needs, JPX renewed its arrowhead cash equity trading system in September 2015 based on its fundamental principles of improving the system’s reliability, convenience, and processing capabilities. The renewal will increase system processing capabilities (including trimming order response times from 1 millisecond to 0.5 millisecond) and introduce new functions that make for greater convenience with high priority given to enhancing system reliability.

Taking this opportunity to reach out to many heads of states and leading businessman around the world, what would you say to these investors that may be hesitant about investing in Japan at the moment? Why should they not be worried about the economic downturn?

GDP from April to June has decreased 1.6%, so it may have caused some concern, but I believe that, that is a statistical back flash from the fact that there was such growth in the January to March quarter. What Abenomics is aiming to do, which is to grow Japan through Japanese corporations, is stably on its way. Corporations’ profit was up 26% in the April to June quarter, and maybe it’s something to improve in the fact that the government had to demand the corporations to use their profits to raise the wages and increase investments. But in any case, I believe that in the July to September quarter, we’ll see recoveries.

With regards to China, it is still not an open market. So while it has some positive and negative effects on Japan, it is not something that will give a huge impact. The positive affects could be that, when the usage and demand of natural resources go down, prices of the natural resources will also go down, which is a positive thing for a country like Japan that imports most of its natural resources from abroad. The negative side that we could experience when the Chinese economy takes a downturn is that trade with Japan could decrease, and that could have a negative impact on us. But most Japanese corporations’ growth has been thanks to dealings with US, European, and Asian countries, and not necessarily China, so the negative affect could be contained.