Confidence and commitment: A top 10 economy by 2023

The World Report team spoke with Turkey’s Investment Support and Promotion Agency to discuss what was making the country so attractive for foreign direct investment. The agency showed where investment was coming from and where trade was flowing to, as well as the impressive numbers Turkey expects in the coming years. The agency also explained the measures the country was taking to enhance competitiveness and lure private investment. 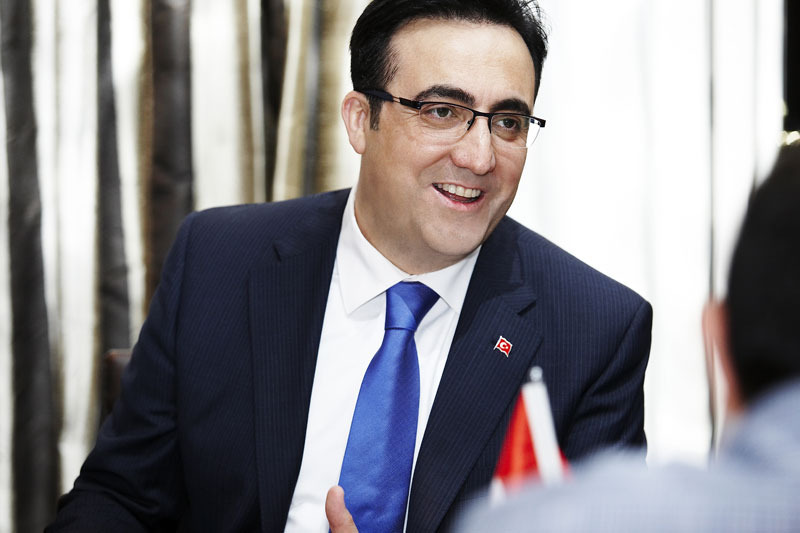 In your opinion, how well has Turkey been doing in the last year or so towards achieving its primary economic goal of diversifying its export markets and sources of foreign direct investment?

It is very clear that the European Union is already Turkey’s largest trade and investment partner. The EU countries had a 40% share in Turkey’s exports and 36% in imports in 2013. Looking into the investment side, more than 50% of foreign direct investment that Turkey received in 2013 came from the EU. As a matter of fact, Turkey and the EU act like a union economically.

It must be underscored that we are well aware of the need to diversify Turkey’s export markets, as well as its FDI sources. While our exports to the EU have dramatically risen by value over the last decade, we have managed to decrease EU’s share in Turkey’s exports to 41% in 2013, down from 58% in 2004.

ISPAT has developed new strategies to diversify the FDI sources, as well. Within this scope, our efforts began to yield results in 2013, the year when we still felt the effects of global crisis. With regard to FDI inflows in 2013, the EU share decreased from 68% to 52%, while Asia’s share soared to 31%, up from 22% in 2012. However, it is expected that, with the economic recovery, the EU may again increase its share in 2014 and 2015.

Source: Central Bank of the Republic of Turkey

What else do you think Turkey must do in order to achieve it ambitious long term goal of becoming one of the world’s top 10 economies by 2023?

As you have already mentioned, Turkey has set challenging targets to achieve by the 2023, the centennial celebration of the foundation of the Republic of Turkey. These targets range from healthcare to economy, defense to education, and from energy to transportation and include becoming one of the top 10 economies in the world with a GDP of USD 2 trillion and increasing export revenues to USD 500 billion.

As a result of political and economic stability as well as political determination, Turkey is now able to set long-term goals and visions. Moreover, Turkey, long before the recent crisis, had already put its house in order and implemented a set of structural reforms that would enhance competitiveness in economy, boost labor market flexibility, and eliminate vulnerabilities.

While Turkey has been implementing structural reforms on the one hand, it has taken various initiatives in close cooperation with the private sector in order to improve the investment climate. One of these initiatives is the Coordination Council for the Improvement of the Investment Environment (YOIKK), a key structure where private sector makes contributions to the process of improving investment climate and is recognized as a success story of the public-private platform by international economic authorities. The council has rationalized the regulations on investments in Turkey, developed policies by determining the necessary arrangements that will enhance the competitiveness of the investment environment, generated solutions to the administrative barriers encountered by the local and foreign investors in all phases of the investment process, including the operating period. Moreover, Turkey has taken exclusive measures to provide a more business-friendly environment for foreign investors. In addition to YOIKK, the government has established the Investment Advisory Council with the participation of senior executives from prominent multinational companies in order to address the administrative barriers to investment, improve the positive image of Turkey as an attractive investment destination and provide a global perspective to the ongoing investment climate reform agenda. Since 2004, the Investment Advisory Council of Turkey has been meeting under the auspices of the Prime Minister and has been taking important decisions since then. These decisions constitute the top items of YOIKK’s reform agenda.

In conclusion, it must be underlined that reforms never stop if you would like to keep up with recent developments in global economy and improve your investment climate accordingly. In Turkey, which has been regarded as one of the most reformist countries in its region and around the globe regarding investment environment, we are continuing these reforms to make the investment environment more favorable.

What is your assessment of Turkey as an attractive business environment, and why you think there has been such confidence in Turkey over recent years?

Turkey, over the last decade, has been able to retain sound macroeconomic fundamentals thanks to the structural reforms conducted by the pro-business, stable government. As a result of these structural reforms, Turkey has emerged as one of the most appealing investment destinations in the world. The economy has been growing over 5% per year since 2002. In the meantime, GDP per capita has more than tripled and Turkey is expected to become one of the fastest growing economies in the world during 2014-2015.

Economic performance, young and dynamic population, strategic location, as well as an investor-friendly environment have altogether created plenty of investment opportunities in Turkey and made it one of the most attractive destinations for FDI in the world.

Thanks to all of these developments; structural reforms, strong financial sector and the confidence in Turkey, the amount of FDI, which was about USD 15 billion during the 1923-2002 period, increased to USD 143 billion between 2003-2014, while the number of companies with foreign capital rose from 5,600 to almost 40,000 during the same period.

Located at the crossroads of Europe, the Caucasus, the Middle East and North Africa, Turkey offers vast opportunities to investors in many sectors with its sizeable domestic market and highly-qualified work force. Along with its large and dynamic domestic market, Turkey offers investors a platform with access to emerging opportunities in other countries, particularly in the surrounding regions. Turkey’s strategic location allows investors to access a potential market of 1.5 billion people, a combined GDP of USD 25 trillion and foreign trade of USD 8 trillion. Having seized this opportunity in just ten years, Turkey managed to increase its exports from USD 36 billion to more than USD 150 billion.

Many multinational companies have either established their manufacturing bases in or moved their regional headquarters to Turkey, as the country offers a robust platform for economic expansion on a regional scale, enabling these companies to leverage common qualities and local capabilities in Turkey. For instance, Coca-Cola has already established its regional HQs in Turkey, managing operations in 94 countries. Similarly, GE Healthcare has moved its regional HQs to Istanbul to manage its operations in 80 countries in four regions - Central Asia, the Middle East, Russia and Africa. Microsoft is also managing 80 countries from Turkey. The Turkish government strongly supports global companies to move their regional HQs to Turkey. With a recent amendment to the FDI legislation, foreign companies can now establish their regional management centers in Turkey under a liaison office structure without paying corporate tax, VAT, personal income, and stamp duty.

It is well-known that Turkey’s skilled labor force is available at very competitive costs compared to the world. While the labor cost in Turkey is considerably lower than in rival countries, the growth rate in labor productivity has been impressively higher in recent years. Lower labor costs and lower average wages, together with increasing labor productivity, are creating highly profitable opportunities for investors. Furthermore, half of Turkey’s population is under the age of 30. Every year, more than 600,000 students graduate from Turkish universities. Today, Turkey is training world-class engineers in many areas, ranging from mechanical engineers to computer engineers.

The Turkish government has also been implementing a series of incentives schemes. The latest of these was announced in April 2012, and its main objective is to boost production and investment for high-import-dependent intermediate goods, as well as to increase investment in the lesser-developed regions. The new incentives system offers investors different options, including reductions and exemptions in tax and social security premiums, land allocation, R&D support and etc.

To sum up, with its favorable investment environment, Turkey continues to be a safe harbor for international investors in the region and the rise in greenfield investments is a good indicator of the investors’ high confidence in the Turkish economy’s future. High added-value, technology-intensive and greenfield projects were on the rise in 2013 - a trend that is expected to continue into the future.

How does ISPAT play an especially important role in attracting assisting private investors in Turkey?

In order to provide foreign investors with better services, in 2006 Turkey established the Investment Support and Promotion Agency of Turkey (ISPAT), which is directly attached to the Prime Minister.

ISPAT provides investors with assistance before, during and after their entry into Turkey. It serves as a reference point for international investors and as a point of contact for all institutions engaged in promoting and attracting investments at national, regional and local levels. It works on a fully confidential basis and combines the private sector approach with the backing of all governmental bodies. ISPAT’s free-of-charge services include, but are not limited to, providing market information and analyses, industry overviews and comprehensive sector reports, site selection, coordination with the relevant governmental institutions, facilitating legal procedures and applications, such as establishing business operations, incentive applications, obtaining licenses and work/residence permits.

Active on a global scale, ISPAT operates with a network of local consultants in Canada, China, France, Germany, India, Japan, Saudi Arabia, Spain, the Russian Federation, the UK and the US offering an extensive range of services to investors through a one-stop-shop approach, and assists them in obtaining optimum results from Turkey. ISPAT’s team of professionals can assist investors in Arabic, Chinese, English, French, German, Italian, Japanese, Russian, or Spanish as well as Turkish, and is dedicated to helping investors successfully develop their business operations in Turkey.

Assess the state of Turkey’s trade and investment relations with the UK, and what ISPAT is doing to enhance that relationship.

The UK is one of the biggest trade partners of Turkey and ranked 3rd largest export and 12th largest import partner in 2013. The trade volume between the two countries was USD 15 billion in 2013.

Regarding investment relations, it can be stated that as of June 2014, there are more than 2,700 companies with UK capital in Turkey and the UK was the 2nd largest investor in Turkey in the first eight months of 2014.

The UK is among the top investors in Turkey; nevertheless, the investments from the UK are insufficient considering that the country is one of the top FDI sources in the world.

In order to promote investment environment and opportunities in Turkey, ISPAT held 101 visits to 39 countries including the UK in 2013. We would very much like to see the UK investors invest in high-technology, high value-added and skills-intensive industries, as well as in energy and huge infrastructure projects. To this end, we have recently held the “Investing in Turkey” seminar in London for the presentation of Turkey’s investment landscape, with the participation of Turkey’s Minister of Finance, government officials and business leaders.