Over the past 21 years, Digital Garage (DG) has pioneered many firsts in internet-based projects in Japan and connected it with countries overseas, particularly with the US. Having expanded and accumulated a wealth of know-how through its involvement in a huge range of internet businesses, President and Group CEO Kaoru Hayashi explains what drives the company and where it’s headed next. 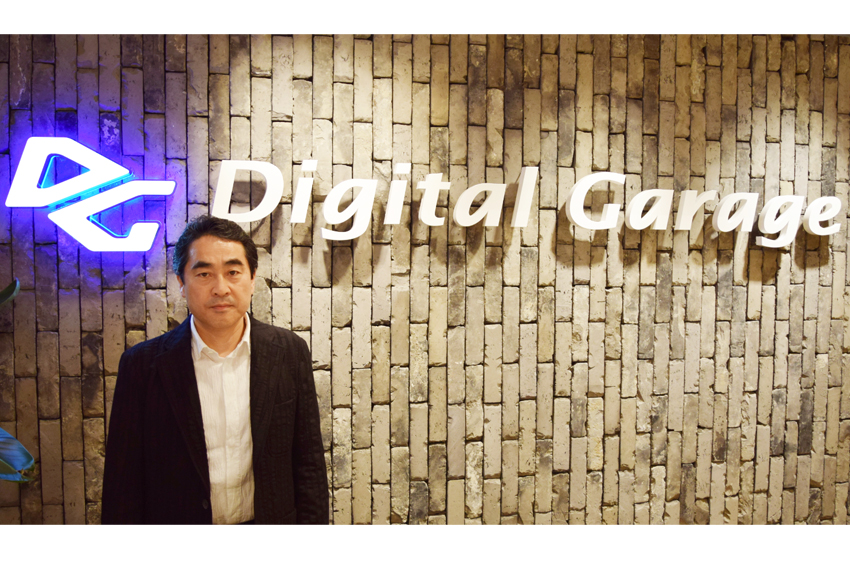 What do you think is missing today to create a “Silicon Valley” in Japan?

When I first visited the United States’ Silicon Valley, there were only Americans doing business. Recently, the population has diversified. In Japan, if we were to do the same thing, we have to have the same kind of environment. In order to realize that kind of environment, first, we have to change our education here. Instead of the current scholarly and record-oriented way, we should have more respect for entrepreneurship and regulation.

We have to encourage risk-taking. In Japanese society, we tend to discourage people from standing out. We say the nail that sticks out will be hammered. However, we rather have to encourage those who stick out. We have to change and establish the societal mentality. We cannot just copy the surface, or the structure of it, but we have to have the spirit in order to realize the real Silicon Valley. Maybe in 10 years, when our teenagers become our generation, then maybe we will be able to realize that kind of environment.

It has always part of your DNA at Digital Garage to create the future of the internet business. With net sales reaching nearly 40 billion yen, that is nearly four times the amount of five years ago. How did you manage to reach such an impressive performance?

We have tried a lot of ways, and then realized there are only two ways to monetize in the internet world. One is to organize the advertisement, and the other one is to provide service for payment. Providing the right service for advertisement and the right service for payment is in our DNA. There are many examples in the real world that did well on PCs, did not do well on cell phones, but then did well on smart phones. There are many such combinations. For example, like what we have done with Kakaku.com, we see ahead. Then, we predict the next technologies that will come. We have been providing service and support for those companies that look ahead.

We have the “First Penguin Spirit” in our DNA, the mindset of taking risks and creatively challenging oneself. Another thing that is in our DNA is a saying by Timothy Leary: “Think for yourself and question authority.” Common sense during World War II, during the Industrial Revolution, of 10 years ago, and common sense now, are all different. In our culture, our DNA, there is always the spirit and the idea of questioning common sense.

One other important aspect of us being here in Japan is to talk about Abenomics and its impact on global mindsets. Digital Garage really embodies the spirit of internationalization. How is it part of your spirit to be international and create bridges with the US?

As you know, Joichi Ito, our co-founder, is the director of the MIT Media Lab. I have spoken with him about the things to come in the next seven years. Of course, the 2020 Olympics are coming up. We are preparing to establish this DG Lab, focusing on five elements: blockchain, AR/VR, AI, security, and biotech.

The Expo ‘70 in Osaka and the previous Tokyo Olympics have led to the exposure of many new technologies, new things, and new systems. We are looking at the 2020 Olympics as a platform to enable innovation. 100 years ago there was something called Bauhaus and we want to make an open innovation lab version of that.

As the eighth most innovative company in the world, according to Forbes, how does Kakaku represent today the future of your business?

For connecting data science businesses, Kakaku will be very important to the technology segment. To provide data, we have lots of information from Tabelog. We have about 1 trillion records from eCommerce. We would like to collaborate with other businesses to create innovation.

It is very important to understand that Digital Garage managed to be one of the leading contributors of this US-based start-up community in San Francisco, and now in New York. How did you manage to impose your brand, and your model, in such an American start-up environment?

The biggest element is that Joi Ito and I co-founded this company. Like heads and tails of a coin, Joi was in charge of the US side, and I was in charge of the Japanese side, and that is how we function. When we started, the internet connection was really poor. Sometimes, we had to wait 10 minutes in order to connect to the internet. Now, the infrastructure and the clouds are more established. It does not take much to start-up and establish global businesses. There are not so many disparities among regions, either. Also, it has been six years since the Open Network Lab started its operation. There are many Japanese companies that are invested in many US companies. Many Japanese companies are currently going to the US. Within Japan, we hosted the French Tech last year. The minister was here to speak at the event.

To focus on another pillar of Digital Garage business, the marketing segment, you have also gone through very impressive growth in the past three years of about 35%. It is not only about smartphone ads, as you said; it is also about data science business, where you talked about Kakaku. How do you think the data science business will impact the future lives of people?

Basically, a company that cannot handle data science cannot survive. This is the kind of era that we are in now. I think we are on the verge of the changing in perspective of advertising. AI and blockchain are merging together. The payment and the contents are all accumulated. Previously, the advertisements are all given, and you involuntarily see things. Now, the company will select the kind of information that you want. Then, the customer is given just what they exactly need. In that sense, advertising will become one of your assets and your investment.

20 years ago, I was asked by a banking venture capitalist, “How can I invest without risk, or how can I invest in an unknown-risk area?” Recently, the idea of risk taking has changed, especially in the investment banking domain. In the United States, there is already an environment where graduates from leading universities are determined to do something and would start up right away. If it goes well, then they are respected. However, in Japan, there are not so many graduates from the leading undergraduate or graduate schools doing the same kind of things. However, I think we are seeing some triggers of the change in this domain. I am proud that Digital Garage has been able to provide a platform for this kind of dream. There are many students from Japan and the US who are interested in joining Digital Garage as well as start-ups.

How is Digital Garage contributing to society? How are you helping people to make their lives better in general, and how important is it to you?

The core of the internet is transparency and sharing the economy, which is represented by open sourcing. Personally, I think this reflects the Japanese Confucianism and spirit, the Buddhism spirit, and the altruism spirit (which is by giving profit to other people, then this profit will come back to yourself). I think the idea is very close to these kinds of thinking. Therefore, I decided to make the internet my lifelong work. Of course, we are focused on the business results, as we are a listed company. But, we would really like to be a company that creates a sustainable and needed service for a better society.

There are so many things in the world that result from the chain of hatred. The human being started all this, so only a human being can stop this. In the internet society, there are so many things going on, and it is possible to do many things. The open-source platform of the internet can lead to many things. As you can see, Creative Commons and Wikipedia are pretty much established. When they initially started, nobody thought that this was going to be a reality. That means when there is a will, there is a way. We can see the fruit of it. Also, we cannot only pursue merits for one. I really believe that we have to become a company that could think for the society, and think about the others.