Business & Investment met with José Darío Uribe Escobar, Governor of the Colombia Central Bank, discussing present and future of the financial situation in the country and beyond. 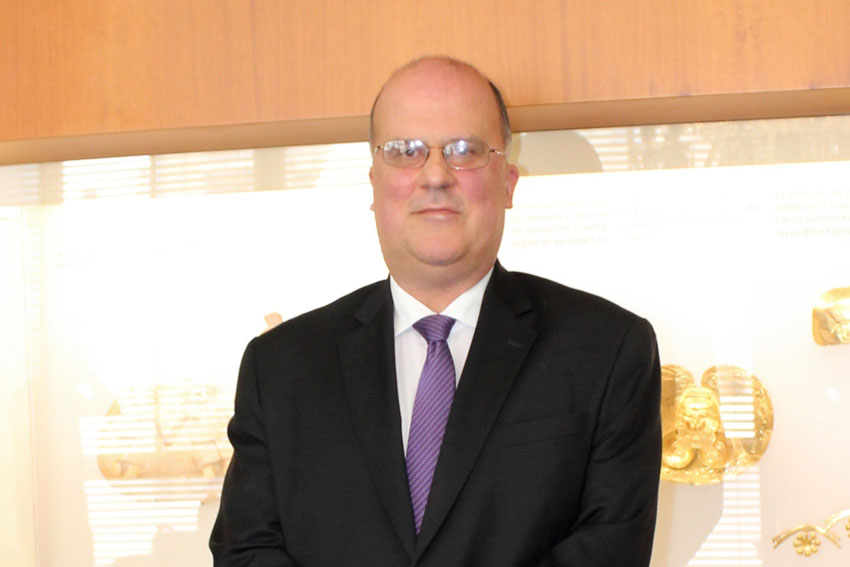 The Bank of Spain has lost 23,900 million euros due to the Greek crisis and the Asian stocks also plummeted partly because of this crisis. What is your assessment regarding the situation in Greece and how do you think it will affect Colombia?

The Greek crisis raises fears about the recovery of the European economy. At the same time we have seen a sharp drop in stock prices in China and there is uncertainty about the timing and effects of the increase in the interest rate of the Federal Reserve of the United States. All this has led to volatility in international financial markets, which has been accompanied by a strengthening of the dollar and declines in commodity prices, especially oil. The main export product of Colombia is oil, so that price drop affects the country significantly.

According to the IMF, Colombia is the third most growing economy on 2014 in Latin America, although this year the forecast is somewhat affected by the oil crisis. How is the fall in oil prices affecting the Colombian economy and what sectors are the ones to boost?

The fall in international oil prices means a decrease in foreign exchange earnings from exports and direct foreign investment in an oil-exporting country such as Colombia. That depreciates the local currency. One dollar, today, is worth almost 50% more pesos than a year ago. In addition, the decline in oil prices, as it has a lasting or permanent component, forces the economy to adjust its path of domestic spending. This leads to lower GDP growth in the short term. This year we are projecting GDP growth of close to 3%, considerably lower than the average growth observed in the previous ten years, which was about 5%. We hope that the ambitious plan of investment in infrastructure and the real devaluation of the peso, with its positive effect on the tradable sectors, will promote further growth in the future.

An important part of the strength of the Colombian economy is the strength of its financial system. We have a well-capitalized, profitable and liquid banking sector, which has also spread internationally in the region and is increasingly reaching various sectors of the Colombian population. All this has been part of a set of factors that help Colombia, despite the slower growth, absorb the negative external shocks well and continue to excel in the region. Looking forward we will see the financial sector making its valuable contribution to the development of the country, moving forward on issues of financial inclusion, especially in rural segments and small and medium producers; participating in the financing of major infrastructure projects and offering new services.

According to a report by FitchRatings, in 2015, Colombian banks, along with those of Peru, are among the strongest in Latin America. How does this benefit Colombia's international image?

For any foreign investor it is important to know that Colombia has a healthy financial system. As seen during the recent international financial crisis, the collapse of financial systems in some advanced economies came accompanied by huge losses of growth and wealth. A healthy, strong, and able-to-absorb-shocks financial system, is a financial system that gives tranquility to all investors.

We are facing a historic moment, with the largest infrastructure investments in the history of Colombia. What impact do you think the financing of these investments will have?

Well, one of the major bottlenecks to the Colombian growth is the lack of an adequate transportation infrastructure. Hence the importance of the ambitious program of infrastructure investment driven by the national government. Therefore, if the Colombian financial system participates in the financing of large infrastructure projects, and does so measuring the risks well, it will make a huge contribution to the growth and welfare of the Colombian people.

What are the major challenges in financing these projects? What opportunities do they create for different investors, and for the banking sector in particular?

In physical infrastructure projects in the country there are huge opportunities for investment and funding, not only for domestic but also for foreign actors; and not only for banks but also for other institutional investors, as would be the case in Colombia of the Pension and Severance Funds. Those interested also have a strong institutional sector. The main challenges are to adequately define the mix between equity and debt, and between the risk taken by the private sector and the risk taken by the public sector.

In Colombia the main players in the banking sector are national. Also, several of them have a presence in Miami or trade in the NYSE. What are the areas of cooperation in which you think you can create more synergies with the United States?

About 70% of the assets of the Colombian banking system are in the hands of national institutions, and three of the four largest banks are national. In recent years we have also seen a rapid internationalization process of the Colombian financial system, expanding into Central America and other neighboring countries. With the Central Banks and the supervisory authorities of these countries we have very close cooperation, sharing information and meeting regularly. With the United States, our main trading partner, we have a free trade agreement and a potential joint work on developing new financial instruments.

The survey conducted by the Central Bank of over 76 financial entities, research centers and universities revealed that some of the threats facing the country with regard to economic growth and the strengthening of banking are the devaluation of the change rate, the global economic slowdown, the drop in oil prices and the devaluation of the stock market. How are you facing these challenges to alleviate their impact?

Colombia is a small, open, commodity-producing economy. As the price of its main export product falls, and this fall has a permanent component, the economy has to adjust. Part of the adjustment means lower growth in aggregate expenditure, and that is taking place in an orderly manner. Another part is achieved through the devaluation of the peso, and that we have also seen. The peso has depreciated significantly against the dollar, without causing major trauma. The flexible exchange rate helps to partially cushion the negative shock from the international economy.

It is well known that greater transparency in the formulation and implementation of monetary policy strengthens the credibility of the central bank, improving the efficiency of its policies and contributing to the better functioning of the markets. How are you promoting a more transparent central bank?

The Banco de la República, the Central Bank of Colombia, is a very transparent organization. In relation to monetary policy, we have a flexible inflation targeting strategy, with objectives that are clearly defined by the Constitution and the Law, independence in handling instruments and rules of action that are well known by the domestic and international markets. After each meeting of the Board we put out a statement and hold a press conference, we publish a quarterly Inflation report, which I personally present on public television, and all those interested can ask me, live, questions. Board members continually make public presentations.

The Bank's technical team members make a lot of reports and do research, not only on the central bank's own issues, but on other issues too. For example, an important part of the intellectual production of the country on the functioning of the labor market, regional economics, economic history, industrial economics, the performance of productive and social sectors, and many more, is conducted by technicians from the Banco de la República. The works is done in Bogota and in specialized regional centers in Cali, Cartagena and Medellin. We also have an active program of financial education, which started in the late 90s, especially aimed at young people and children. With this program we want to make them understand well what a central bank does and we want to contribute so that in the future they will take appropriate economic and financial decisions.

You were recently chosen by the British magazine The Banker as the best central banker in Latin America. What does this recognition mean on a personal level but also at a country level?

I do not see it as a personal recognition. I see it as recognition of the work done, not only by the Board, which has seven members, but also by the technical staff of the Bank, which has always been considered of very high quality.

You've been General Manager of Banco de la República since 2005, what have been your biggest disappointments and your greatest satisfactions while occupying this position in the bank?

There are many satisfactions. The main satisfaction is that Colombia has achieved the objective of price stability, defined as inflation at 3%, with a control range of plus or minus one percentage point. We have left behind decades of high inflation, fluctuating between 18 and 30%. Furthermore, the Colombian society has internalized the enormous benefits of having low inflation and an independent central bank. In terms of disappointments, I do not really have one to highlight. Of course, you always want to do more.

In relation to the support of the society you mentioned, what characteristics, in your opinion, does a good leader have?

I think a good leader should clearly define the objectives, make them be understood by all, and ensure that the objectives are achieved through teamwork. I think that is an essential feature.