Christopher Miller, the IFC’s Country Officer for Tajikistan, discusses national pro-business reforms, his organization’s advisory role in Dushanbe, and the significant growth of the IFC’s investment portfolio in the country. 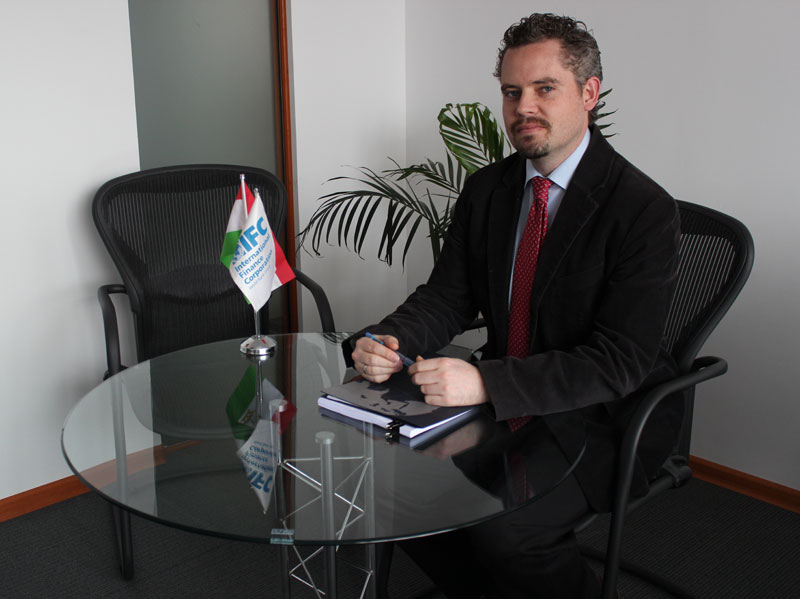 What is the size of IFC’s portfolio in Tajikistan and what projects would you mention as particularly interesting examples of recent investment?

IFC has been working in Tajikistan for more than 10 years, focusing on financial markets, infrastructure, and what we call the real sector: manufacturing, agribusiness, and services.  We work exclusively with the private sector and do not provide financing directly to, or guaranteed by, the government. Our committed investment portfolio stands at just under $76 million with several additional projects in the pipeline.

This last fiscal year was IFC’s most successful to-date, with a little over $42 million invested in Tajikistan. And we see this trend continuing in the future with more opportunity for IFC to work with local companies on new investment projects.

About half of our portfolio in Tajikistan is concentrated in financial markets. In our last fiscal year we did three projects in the financial sector and we work with several leading microfinance organizations and banks in Tajikistan. These include First Microfinance Bank, Imon, Access Bank, Finca, and Eskhata Bank.

Outside of the financial sector, we are working on growing our infrastructure portfolio. One older investment we’re very proud of is with Pamir Energy, the independent power producer providing electricity not only to Tajikistan’s Gorno-Badakhshan Autonomous Province (GBAO), but also to the border regions in Afghanistan. This is one successful example of how a private company has worked under a concession agreement with the government to provide professional, reliable infrastructure services in a tough geographic environment.

More recently we have just signed a new loan with one of the leading telecommunications companies in Tajikistan, TCell, to support network expansion and improve connectivity for its subscribers. We see increasing opportunities for private participation in infrastructure, which is crucial because the country’s infrastructure financing gap is expected to be significant. The public budget will likely be insufficient. This is one reason IFC supported the development of a new Law on Public Private Partnerships, which are often ideal for infrastructure projects.

Finally, the manufacturing, agribusiness, and services sectors represent the smallest share of IFC’s portfolio, but are an area of increasing focus. These sectors have a big impact on job creation and poverty alleviation, which are central to the mission of the World Bank Group. We see a lot of good project ideas, particularly in the agribusiness and light manufacturing sectors, even though these projects still tend to be quite small, below IFC’s threshold. However, this is starting to change, and in recent years we have made three investments in agribusiness and services.

These include a loan to help a local distribution company expand their operations and a project to help launch Tajikistan’s first domestic chocolatier. This company is continuing to introduce new varieties of chocolates and sweets to the local market and competing quite successfully with Ukrainian, Russian, and European imports.

Our most recent project, in the agribusiness sector, was completed earlier this year with a French firm that is opening a factory to produce animal feed. This is a good example of the kind of investment Tajikistan is beginning to attract. Experienced foreign firms are now bringing not only financing, but also new technologies and know-how to their local partners. Animal feed is a key part of the value chain for the poultry and meat industries, and a potential export to other countries in the region.

What is the focus of the advisory role IFC offers here in Tajikistan?

Our advisory work is crucial to IFC’s presence in Tajikistan. And we are fortunate to work in strong partnership with the governments of Switzerland, the UK, and Austria, all of which are funding IFC’s advisory work in the country.

Our advisory work is focused on improving conditions for the private sector. We work with the government and the private sector to improve business regulation, tax administration reform, corporate governance, financial markets infrastructure, agri-finance, and microfinance. We also have an interesting advisory program focused on bringing private investment into the infrastructure space in Tajikistan.

Our advisory program has been working with the Tajik government for over 10 years, and we’ve achieved some very positive results. Examples include new methodologies for lending to agricultural clients that have reduced non-performing loans, which helps banks increase access to finance for farmers; establishing the first-ever private credit bureau in Tajikistan, which helps increase access to finance, particularly for SMEs and entrepreneurs; and introducing a risk-based approach to private sector supervision, which reduces the burden of inspections and tax audits on most businesses.

Another reform that helped cut red tape was the so-called ‘guillotine process’ to reform the country’s permits system. Tajikistan used to have more than 600 permits. Together with the Government, we required every agency issuing permits to justify why the permit was needed and to detail how the agency was minimizing compliance costs on the private sector. Any agency that couldn’t justify its permits lost the right to issue them. By the end of the process, Tajikistan had 86 permits left, a more than 85 percent reduction. We later evaluated that this single reform now saves the private sector more than $15 million every year in compliance costs.

Which other government reforms would you mention that have been conducive to the flow of foreign direct investment into the country?

Looking at reforms over the last 10 years, I think we’ve seen significant movement in two directions. The first has been a push for greater economic integration into the region and the world, and of course the flagship achievement there is Tajikistan’s accession into the WTO, which was more than 10 years in the works and required a significant commitment on the government’s part to opening the country to increased competition.

Along with WTO accession, a number of other steps contributed to the opening of Tajikistan’s economy. The ratification of the New York Convention on the recognition of foreign arbitration awards is one. The convention puts in place a tough enforcement mechanism for arbitration decisions, and will help improve protection for investors working with the state. By ratifying this convention, the government has sent a strong signal to investors that they are serious about attracting investment.

Another example is the ongoing work – supported by IFC, the government of Switzerland, and DfID – to accede to the Apostille Convention. This will cut down on the complexity of foreign investment, reducing the time required to invest in Tajikistan. It will also have a positive impact on Tajiks studying or working abroad by streamlining the recognition of their public documents, such as diplomas.

Alongside these reforms to open the economy, there has been a parallel trend of reforms aimed at improving the investment climate. Much of that work has been supported by IFC and other development agencies in Tajikistan such as SECO, DfID, the United Nations Development Program (UNDP), the German Organization for International Cooperation (GIZ), the Asian Development Bank (ADB), and others. These efforts have led to improvements in the time, cost, and resources needed to start a business, pay taxes, obtain a permit, undergo an inspection, and more. In many areas the government is moving to electronic service delivery, which will further reduce the time needed to comply with regulations and reduce the potential for corruption. We still see challenges in regards to reform implementation, and there is still work to do. But we have seen considerable progress over the past 10 years.

What is your advice to potential private investors in terms of sectors, approach and business when it comes to Tajikistan?

Tajikistan has a lot to offer to investors, in terms of resources as well as geography. The mineral, oil and gas, and water potential of the country is enormous, with additional opportunities related to agricultural production and tourism. Geography is often viewed as a disadvantage for Tajikistan, being an isolated and land-locked country, but we are starting to see more investors interested in gaining a foothold in a growing region, and in a country strategically positioned at the crossroads of Central, South, and East Asia. Whenever I start seeing Tajikistan as isolated, I remember that nearly 40 percent of the world’s population lives within a four-hour flight of Dushanbe.

The country’s potential is limited by three key challenges: poor infrastructure, remaining weaknesses in the business environment, and a global lack of knowledge about Tajikistan. My advice to investors: keep in mind that local knowledge is critical, and know that business development can take longer in Tajikistan than in other frontier markets. This is not a place for short-term investors, but it is a place where long-term investment can deliver strong returns, where a government is moving in the right direction, and where committed partners like IFC are always looking to uncover the next great investment opportunity.