Ethio Telecom ranked as the second biggest operator in Africa and 38th in the world, according to the 2015 GSMA intelligence quarterly report. Internationally awarded for its quality and service, it is gaining 2.5 million new customers every month and last year’s profits topped $1 billion. CEO Andualem Admassie Abate discusses the operator’s milestone achievements, its rapid growth, new strategy, and where it’s headed next. 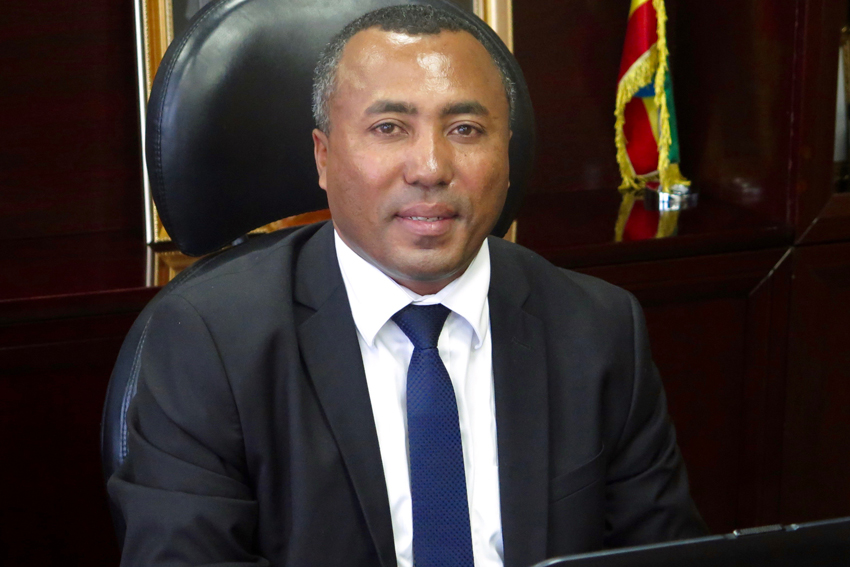 What role does Ethio Telecom play in Ethiopia’s GTP and in its astonishing growth?

The government has allowed us to work as a private sector company to serve our customers with a sense of urgency and to be customer centric. This is the philosophy of a private sector company. The telecom sector is the enabler of the country’s economic growth. Countries with investment in telecom and transport sectors are booming. This is how the rest of the world works.

We are in everybody’s pocket and we affect everyone’s life. We affect everyone’s work, everyone’s business and every sector. If telecoms are not working accordingly, then people are complaining, and that’s how they know whether I’m doing my job or not. Then businesses, investors and exporters get affected. If they lose communication for one day they will lose their business. And if you don’t deliver – others will. Therefore, if you face connectivity problems in your factory then you lose your market. It may take years or months to regain a customer and so this is a very, very sensitive sector.

Research shows that if we increase broadband coverage by 10% it can contribute 1.3% to the GDP of the country. This is the impact of this sector. Ethiopia’s GDP is growing by 11%. If I work to increase the broadband coverage by 20%, then I will increase the growth from 11% to 13.6%. Its contribution to the GDP is immense, so it has an impact on the economy. Whatever sector you name – we are there. Imagine if someone is in an emergency and can’t call an ambulance in a rural area. It is not just a matter of economic growth but also a matter of saving or losing lives.

During the first GTP you managed to achieve 90% of the set targets. Your gross profit grew in the 2014/15 fiscal year by 4 billion birr ($190m) to reach 21.5 billion birr ($1bn). What would you highlight as key to achieving this great performance and what are you expecting in the GTP’s second phase?

We successfully achieved all our targets of the GTP 1, with the exception of the fixed lines. We have tripled the subscriber base for mobile broadband. Five years ago we had 6 million subscribers whereas now we have up to 40 million customers. In the present days we are acquiring almost 2.5 million new customers every month. According to the GSMA intelligence quarterly report of 2015 Ethio Telecom ranked second biggest operator in Africa and 38th in the world. This success also gives us the chance to serve our customers better.

Of course we still need to work a lot. Last year we generated 21.5 billion Ethiopian birr and by the end of this fiscal year we expect to generate 38 billion Ethiopian birr. Our biggest success is due to our network expansion and to our new business approach. Now we are more customer centric and we are working on a diversified strategy to offer different products and services to the market.

This is why we have been awarded as the Best Operator by the Africa Leadership Awards and the International Europe Award for Quality. This advancement is not the end but the means to keep us motivated. Our main success triggers are network expansion and a new consumer-centric strategy.

As you said, you recently were awarded two international prizes, the 2015 Europe Award for Quality and the 2015 Africa Telecom Leadership Award. What do these awards mean for you personally and how are you working so that all your employees strive for greatness?

In order to achieve big wins you first need to celebrate several small wins. I do not want to be seen as a successful Ethiopian operator; I want us to be the biggest operator in Africa. We received the 2015 Africa Telecom Leadership Award in four categories: Best Operator of the Year, CEO of the Year, Global Sustainable Leadership Award and Best CEO with Human Resource Orientation. This last award is due to my background in this company, as before being appointed CEO I had been Chief Human Resources Officer. This recognition is a liability for my company and for myself, it forces us to excel, we cannot allow ourselves to be complacent. It encourages us to work harder as it gave us the change to position Ethio Telecom as a world-class company. This prize means that people started looking at us; it is an opportunity to promote our company to the world. This is the first time our company has been awarded in such a way.

What innovations are you especially proud of?

Actually when you think about innovation, you are talking about research, which is at the end of the day looking for the truth. Innovation involves both success and failure. If you do not fail you cannot come up with innovation. I would say innovation is subjective and related to individual problems. The new iPhone is considered to be innovative and yet it might be completely irrelevant to a farmer sitting in a rural area. In my opinion, innovation is the way you find solutions to problems that are relevant to your target.

There is a shift from West to East, and Africa is becoming a growing investment destination for both advanced and emerging economies. How do you view the prominence the continent is gaining in the international arena?

What you already have observed here, especially in Ethiopia and the rest of Africa, is the latecomer advantage. In terms of development, there are a lot of advantages for investors. Investors are always looking to maximize their profits. Most of the investors are now maximizing their profits here in Ethiopia and in the rest of Africa. Ethiopia is one of the fastest growing countries in Africa because it has competitive advantages in certain areas. Everything in the West is matured but the emerging countries have a lot of resources that can be exploited, that can be used, and that can easily support the development of the nation. That’s why most Europeans are coming and investing in Ethiopia. The profits they generate here are more attractive than in the rest of the world and, because of this, Africa is attracting the best investors and multinational companies. Now we also have skilled labor and that attracts the investors too.

As Ethiopia is Africa’s political capital, and is now heading the Council of Ministers of Comesa, could you please discuss Ethiopia’s regional integration efforts?

We are working with different telecom companies such as Djibouti Telecom to come up with a regional hub in terms of deployment and in terms of other issues. Ethiopia is working on these issues in different sectors, such as the telecom sector, the electric sector or the transportation sector. We are exporting electric power to Sudan, Kenya and Djibouti, and negotiations are under way to provide electricity to South Sudan, Burundi, Rwanda and Tanzania. Similarly, we are working with the telecom sector in terms of being the regional hub to serve the rest of Africa, starting from East Africa. Ethiopia makes a lot of contributions of this type – that is the role of Ethiopia in the regional integration.

What are the main milestones achieved in Ethio Telecom’s more than six decades of activity?

Actually, as you have mentioned, Ethio Telecom is just as old as the telecom industry itself. It’s only two decades behind from what we call the edge of the sector, so we are as old as the telecom sector itself – 120 plus years. Of course the Swedish were among the first ones to deploy telecoms; they deployed every system at the time. From then onwards it’s just simply counting our years without any big intervention, without big investments. These are simply just numbers. Then, 12 years ago the government came up with an intervention. This government understands that ICT, or the telecom sector, is the enabler of the rest of the economy. Back then the government was focusing on education, agriculture, health and then, what’s next? Next is the telecom sector, next is the transport sector. That is the government’s intervention and this is why in 2016 it is investing $1.5 billion in this sector. The same amount of investment, $1.5 billion was invested for next generation network (NGN) deployment in 2006 as well. These major investments on the telecom and ICT sectors have been instrumental in the radical change witnessed in the sector. In 2006 the government decided to introduce a mobile telecom service. That was a $1.5 billion project that was given to a Chinese company. The network capacity was very limited – maybe 20 million for mobile, broadband and internet.

The next issue was transforming this company and coming up with a new and better one. The government was arguing over revolution vs. evolution of the company. The decision was complete revolution. They decided to dissolve the existing company and set up a new one called Ethio Telecom.

How did we do it?

The first intervention was to enter into contract management. We tried to pick the best operators on the planet and approached French Telecom, Orange. It was a €30 million investment project and they agreed to help us for two and a half years. They took care of all the highest positions. The CEO and most employees were French, except for a few key departments that the government wouldn’t compromise like legal audit, finance, and security. The French team managed all the internal processes. That management contract gave us a chance to elevate the company to a world-class level. They introduced ARP (Address Resolution Protocol) and changed it from manual to automated, and in a single click the company became paperless. They also introduced a new work culture, a new way of managing people, and different divisions to serve key accounts.

The next step was a successful handover of the company. Then after this there was a question of network capacity. The network capacity is still one of the biggest challenges. The government developed the second expansion plan. We introduced the multivendor strategy and divided the country into certain telecom circles. The principle is that in those telecom circles certain companies can work. We opened a bid and currently there are three operating companies: Ericsson, ZTE and Huawei. The project is now closed and we are going to make a decision. That is part of our GTP. The government intervenes and gives a chance for the expansion of the company.

Ethiopia is one of the first African countries to introduce 4G, and the capacity increased to 80 million subscribers, even though we are now at 40 million. The current coverage is 85%; the remaining 15% has no inhabitants, as it could be an area with rivers or mountains.

We know you are about to launch a tender to upgrade the infrastructure and also extend mobile coverage. What kind of partner are you looking for?