Interview - January 13, 2014
Under its vision to create a vibrant and authentic metropolis inspiring opportunity and a legacy for the Kingdom of Bahrain, Bahrain Bay is a master plan development set off the north-eastern shore of Manama. While the creation of this stylish waterfront will see mixed neighbourhoods of residential, commercial and retail spaces, CEO of the project Abdulla Faisal Al Doseri discusses how Bahrain Bay is a symbol of the country’s great heritage of architectural design, the strong recovery of the real estate market, and the future of Bahrain as a centre of business and sustainable development 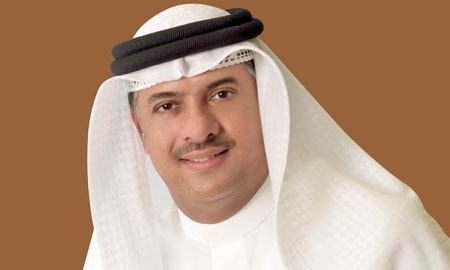 ABDULLA FAISAL AL DOSERI | CEO OF THE PROJECT BAHRAIN BAY
Every sector, and indeed every company in Bahrain, is adapting its business model to walk in the path of the country’s Economic Vision 2030 (which focuses on shaping the vision of the government, society and the economy, based around three guiding principles; sustainability, fairness and competitiveness). With this in mind, how is the real estate sector – particularly the Bahrain Bay project – walking this path?
The real estate market, and overall industry, plays a crucial role in the economy of Bahrain.  It is not only a result of the recent years but it is the product of decades-long work where Bahrain was ahead, among other states, in bringing the most beautiful architecture and the best designs, as seen in our palaces and some governmental buildings. You can see the old dynamism around Bahrain, in Muharraq for example.

That gives us a sense of pride, and in fact distinguishes Bahrain in terms of real estate. Also, our strategic location in the Gulf, and the strong legislation in terms of finance and business, gives us an edge. The history of the pearl trade and the spice trail between east and west built our reputation internationally in the past.
Currently, we are a financial centre; a global Islamic financial service sector that is adding value to trade, finance and real estate businesses. We are extending the legacy of that background, that history and experience and we are leading these values towards the future of Bahrain in terms of real estate.
This is where we were when we hired Skidmore, Owings & Merrill from New York. We had an intensive session with them, with workshops, asking them how they could help us to extend this legacy for the future of Bahrain. We wanted to design a new project surrounded by water to bring leisure, residence, business, investment and commercial activities. All of this needed to take place on an island that is based on strong infrastructure in terms of IT, communications, services and all other amenities required. We wanted to be located in the centre of Bahrain, a project that could be the new Manama (the centre of the Islamic financing in the Middle East).

The third one is the Raffles City, which will have shopping centres and luxury service apartments and apartments for sale. These three elements are key factors in Bahrain Bay. The Arcapita offices were completed and operational in 2010. The Four-Season hotel is under construction and will open in the 3rd quarter of 2014. The third part which is the Raffles City is currently under design and engineering.