Article - December 18, 2013
Despite being rich in gold, oil, copper and other minerals, Sudan's real wealth lies in agriculture and its abundance of disease-free livestock, with the country 'ready to share its potential and resources' 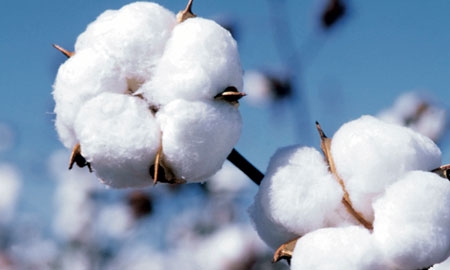 APART FROM FOOD SECURITY, INVESTMENT IN BETTER TECHNOLOGY MEANS SUDAN COULD EVENTUALLY BECOME ONE OF THE WORLD’S LARGEST PRODUCERS OF COTTON
SHARE

The fight for global food security is increasingly becoming a more difficult one.  As the world’s population increases rapidly, so too does the demand for food, particularly from developing countries. This is not helped by the scarcity of arable land to grow crops and raise livestock, as well as unpredictable and severe weather brought about by climate change.
Thirty years ago, it would have been hard to imagine that a country like Sudan could become a breadbasket for Africa and the Middle East and important player in the fight for global food security. For many years the rest of the world fed Africa, but now the tables are turning. Africa has ample resources to feed itself and possibly the rest of the world.
There are many African nations that hold very rich agricultural potential that has yet to be exploited and none more so than Sudan. With the right investment, what would have been inconceivable 30 years ago could soon become a reality.
“Our dream is  to convert Sudanese natural resources into commodities that would help address international food security issues. Sudan is ready to share its potential and resources,” says the Minister of Agriculture, who adds that part of his ministry’s vision is to position Sudan as the breadbasket for the region.
Of the 57 per cent of total land suitable for agriculture in Sudan, the third largest country on the African continent, only 8.5 per cent is being cultivated. “This is a stark statistic at a time when global demand for food is rising,” says Peter Tibber, Ambassador of the UK to Sudan.
The secession of South Sudan in 2011 resulted in Sudan losing a third of Government income and 75 per cent of its export earnings, as the former took control of the majority of oil resources. This, however, could be “a blessing in disguise”, according to the ambassador.
“It will force the country to focus on developing its own economic strengths: agriculture, minerals and the provision of services to its rapidly urbanising population,” he says.
Agriculture has always been the lifeblood of Sudan. It employs 80 per cent of the population – a large part still in subsistence farming but a growing number in small or medium-scale commercial farming. In the early 2000s, the sector contributed around 45 per cent to GDP, but in the past few years that has fallen to around 30 per cent due to growth in the petroleum and service sectors.
Sudan, no longer able to depend on oil for its export earnings, has had a renewed Government focus on agriculture and the development of agribusiness. This will lead to more employment opportunities, poverty alleviation and food security. The Government is increasing public expenditure on agriculture and is encouraging foreign direct investment (FDI) through a number of initiatives and investment incentives.
“Sudan is ready for partnerships. We are looking for those who have capital, good management capabilities, and sound technologies,” says the Agriculture Minister.

“We can leverage on their capital, management capabilities, and sound technologies to play an important role in feeding the region and a portion of the hungry world. Everybody believes in this and understands the importance of it at a global level. We are very keen in attracting FDI. We are open to discussing things with investors. We are eager to hear their ideas on how we can merge our resources for the benefit of the parties concerned and the region. It is the only way to do it.”
Meanwhile, a report by the United Nations Food and Agriculture Organisation states that FDI policy and present circumstances have created a promising environment for sustained investment in Sudanese agriculture. Updated earlier this year, the Investment Encouragement Act 2009 includes tax exemptions and other financial incentives for foreign investors interested in entering the agricultural sector.
Amid such developments, it seems that investment opportunities in Sudan are now as rich and diverse as the land itself.
Sudan is blessed with plentiful sunshine and rainfall, and access to the fertile plains surrounding the life-giving River Nile and its tributaries. The country’s rich soils yield a vast array of crops, such as sorghum, millet and cereal grains, vegetables and fruits, including lemons, mangoes, grapefruits and oranges. Moreover, the Nile is also an abundant source of fish.
Having identified the vast potential for agricultural productivity thanks to the Nile as far back as colonial times, the British initiated the Gezira Scheme (one of the world’s largest irrigation projects) in the country’s Al-Jazirah state in 1925.  The Gezira Scheme – which lies between the White and Blue Niles south of Khartoum – distributes river waters through a 2,700-mile network of canals and ditches to irrigate fields growing cash crops such as peanuts, sesame seeds and sugar cane.
While the success of this project has encouraged the construction of more dams and barrages for large-scale irrigation schemes in Sudan, the Gezira Scheme continues to function today and has seen the country become a notable producer of cotton in particular. With investment in better technology in the area, Sudan could quite easily become one of the world’s largest producers of the plant.
Aside from irrigation, in the drier region of the north livestock farming (of sheep, cows, goats and camels) is most prominent, meaning the country is also a major contributor to the global livestock market. It was reported in early October that the Government’s livestock export target of 4.3 million in 2013 had almost been reached three months early. The majority of livestock exports are destined for the Gulf States, as countries like Saudi Arabia rely heavily on African food imports, mostly from Sudan. In September the Bank of Khartoum, Sudan’s biggest privately-owned bank, announced that it planned to add 12 more retail branches and launch financing for livestock exports to the Gulf.
In times of so much promise, perhaps most notably in regards to Sudan’s hopes for agricultural development is that the sector is seen as key to its increasing cooperation with South Sudan, and an area in which both can work together in order to mutually benefit.
According to the Agriculture Minister, this is a friendship that is already progressing fruitfully: “We now have existing dialogues, such as the Food Security Conference (FSC) in South Sudan that we are preparing for. We are sharing resources and opening up trade. We are set to benefit from each other’s surpluses. Sudan and South Sudan will be working as brothers to achieve the vital goal of food security for both parties and the region.”