Nurturing the future, preserving the past

Article - October 24, 2013
Vast oil wealth is changing the emirate not only physically with new infrastructure, but socially, with investments in its health, education, women and youth 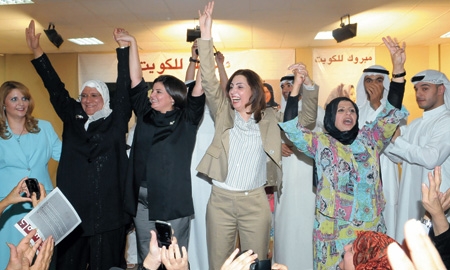 Kuwait’s oil wealth has naturally led to rapid change brought about by modernisation and economic growth.

The country has embraced the changes while successfully managing to hold on to its traditions, its culture, its heritage and what it means to be Kuwaiti. While the Government has used oil wealth to invest in modern infrastructure, it is also investing in contemporary education and healthcare systems. The modernisation drive has also led to changing attitudes, particularly towards the role of women and of youth in society.
As the country aims to create an innovative and knowledge-based economy, the Government has put much focus on youth empowerment and education.

It is nurturing the talents of Kuwait’s young people, fostering their entrepreneurial spirit and investing in ideas. “Students have the support of the Government and it has spent a lot on education,” says Yaqoub Al-Habib, Chairman of the Kuwait American School. “This year it committed KD1 billion (£2.2 billion) to help these young people to open private businesses.” If the government likes a business idea, they will provide the funds to give a young person a chance to get their business off the ground.

Of course investing in the future starts with education. Private schools in particular have taken a modern approach; they are not just focused on exam results. Institutions such as the Kuwait American School are teaching life skills, instilling values and building character. “The aim was to open a school that not only taught kids maths and science. We are the first school to adopt living values education. We are really trying to get them to be globally minded people,” says Mr Al-Habib.
At the New English School, Kuwait’s first private co-educational day school to offer a British-style curriculum, they tell students not just what to learn, but how to learn. “Education used to be thought of as learning your numbers and historical facts and dates, but education is changing into not just about what you are learning, but how you are learning, so that if you are in a situation, what information you need to gather to arrive at a solution,” says the school’s Director, Ziad Rajab. “We have helped to create a lot of modern young Kuwaitis.”
Women’s empowerment is as important as youth empowerment in modern Kuwait and the Government is investing in the entrepreneurship and dynamism of women of all ages as much as it is in youth. “We are investing in female entrepreneurship in Kuwait and we are encouraging more women to go into the business community.

We are pleased that we see an increasing trend [of women] going into entrepreneurship; more women are taking more risks and becoming more entrepreneurial, moving to the private sector,” says Dr Rola Dashti, Minister of State for Planning & Development Affairs.

Women in Kuwait are considered to be among the most liberated women in the Middle East region. In 2011, Kuwait was ranked highest of all Middle East countries in gender equality in the Human Development Report's Gender Inequality Index. In 2012, nearly 50 per cent of Kuwaiti women were in the workforce in a large range of occupations.

Women are now in government, a right they have enjoyed since 2005, when Dr Massouma Al-Mubarak became the first female government minister. In January of this year, legislation was introduced that will allow women to become judges for the first time.
“You will see a rise of women in various decision making processes, a rise of women in the business community, a rise of women in the political community; women are moving much more to the public sphere alongside their role in the private sphere,” explains Dr Dashti.
As well as the establishment of a modern education system, the development of a world-class healthcare system has been of prime importance to the Government, and like in education, both public and private institutions are encouraged to thrive.
“The Ministry of Health in Kuwait is placing a strong emphasis on public health in Kuwait. [The healthcare system] is a little similar to the NHS. It is free for Kuwaiti citizens and expats. We have the best and the most up-to-date equipment available in the world, and all the treatments are given free of charge,” says Dr Hilal Al-Sayer, former Minister of Health.
Of course with all this modernisation, there will always be a conflict with the preservation of traditions, culture and heritage.

With the rapid changes brought about by modernisation, changes in lifestyle and the influence of foreign languages, many aspects of Kuwaiti heritage have naturally faded away. Modern Kuwaiti women enjoy freedoms their mothers could only have dreamed of, yet there is still this conflicting idea that they adhere to traditional customs.
The conservation of antiquities and heritage is enshrined in the Amiri Decree of 1960. Organisations such as the National Council for Culture, Arts and Letters (NCCAL) continue their efforts to conserve Kuwait's rich cultural heritage.

At same time as the Government seeks to modernise Kuwait, it and its organisations such as the NCCAL work to preserve its rich history and culture that many visitors have come to experience and enjoy. In Kuwait, modernisation is walking hand in hand with tradition towards a bold and bright future – a bright future for all Kuwaiti citizens.