Article - December 2, 2013
Stay in a homely hacienda amongst the home of Maya ruins 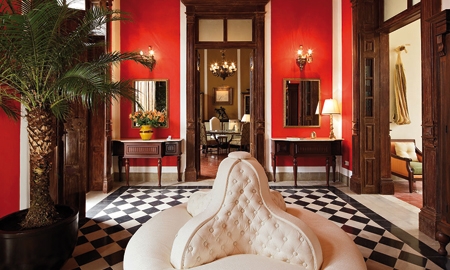 JUST ONE OF YUCATÁN’S MANY BEAUTIFULLY RESTORED HACIENDAS
SHARE

Yucatán, one of the three states that make up the Yucatán Peninsula, is an area of farmland, tropical forests and beautiful coastline that lies eastward along the Gulf of Mexico and the Caribbean Sea.
As the ancient home of the Maya –considered as one the great civilizations in history – Yucatán offers a unique travel experience rich in authentic Mexican heritage to which generations of travelers have continually been drawn.
Today, however, not only can you experience the Maya tradition and archeology in all its majestic glory, but do so by further enriching your sense of place and time through staying in one of the 50 restored luxury haciendas that are located in the Maya countryside just outside the capital city of Mérida (voted among the top five Mexican cities by Condé Nast Traveler Reader’s Choice Awards in 2012.
The haciendas were actually cattle, corn, sugarcane and sisal (henequen) farms that flourished during the 1800s. However, when the henequen boom came to an end in the 1940s, many of the haciendas faded to near wreckage. Thankfully, resourceful owners have transformed the finest of these surviving estates beyond their 17th century splendor, combining historic, traditional and modern elements to create a spectacular array of properties, each with a style and character of their own.
Including their own swimming pools, the haciendas are also surrounded by modern amenities such as spas, fine-dining restaurants, gardens and other upscale features, serving as a great restorative retreat for couples and families.
Also of interest are the area’s famous cenotes (natural sinkholes) that pierce the surface of Yucatán’s limestone plateau, offering the chance to bathe in the emerald green waters of the region’s unique subterranean river and cave system.