What’s in the pipeline for pakistan’s gas needs

Article - April 30, 2014
By early 2015, Pakistan will receive 400 mmcfd of LNG, while the proposed TAPI pipeline project, once completed, will pump in an additional 1,325 mmcfd gas 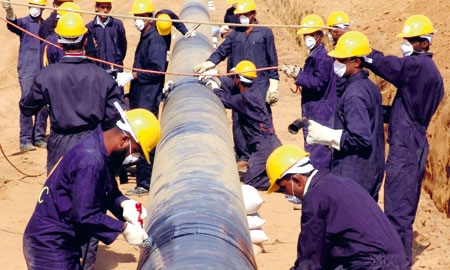 Over the last several years, rising consumer demand for natural gas has been outstripping decreased supplies, forcing both the gas utilities to reduce supplies to compressed natural gas (CNG) outlets and industries. For instance, during the last winter season, when the mercury dropped drastically, both companies were compelled to cut down their supplies to CNG stations in their respective franchise provinces. In order to rationalise consumption, both the utilities follow a federal government-approved Gas Load Management Plan that puts emphasis on supplying gas to domestic customers first, and then to commercial, industrial, fertiliser and finally to the CNG customers.

Consequently, in order to fix the demand-supply mismatch, Pakistan is investigating possible solutions to ensure energy sustainability and security.

In the short term, LPG-air mix projects approved by the Economic Coordination Committee have the potential to meet the country’s needs. Feasibility studies completed by SNGPL and SSGC have shown that these projects are technically feasible.

Other proposed and planned solutions for meeting Pakistan’s increasing energy demands include the construction of a new terminal at Karachi’s Port Qasim to receive LNG imports, likely to begin arriving by early next year.

A fast-track LNG project dictated a $1.5 billion, 15-year service tolling contract be executed. The project is being negotiated for the purchase of 400 mmcfd of re-gasified LNG.

LNG is a vital piece in solving Pakistan’s energy puzzle. With ample room for additional supply of gas in the existing infrastructure, the regasified LNG can be used to substitute more costly furnace oil and diesel for power plants.

If LNG is a medium-term solution, the Turkmenistan-Afghanistan-Pakistan-India (TAPI) Gas Pipeline Project is an indispensable multinational and multibillion-dollar project which may be one of the answers to Pakistan’s energy woes. Expected to be completed around 2017, the pipeline will transport Caspian Sea natural gas from Turkmenistan through Afghanistan into Pakistan and then to India.

For Pakistan, the gas import will be able to support some 5,000MW of power generation. For the countries involved, the project stands as a beacon of hope for regional cooperation and interdependency. The elephant in the room is fairly loud and clear; this is one of the world’s more dangerous areas and a common goal could help settle certain disputes, while the promise of a more affordable energy source for the people could help the governments gain popular support.

The perception of Pakistan as a perilous country also has an effect on potential investors. Zuhair Siddiqui, Managing Director of SSGC, explains that to improve the country’s image, “all stakeholders – the media, the government and corporate sector – need to make a conscious effort as a team.”

For its part, SNGPL is looking to other countries for more than just energy. Supplies for the provision of that energy may come from the UK, for example. According to Arif Hameed, Managing Director of SNGPL, “The UK is one of the very best countries… in the measurement side, in  electronics, and in control tools.”

The challenges in energy that Pakistan faces don’t lessen the optimism felt by SSGCL and SNGPL. “I think a lot of work is being done to resolve the issues but obviously, you cannot do it overnight. It will take time,” says Mr Siddiqui.

With over 50 years of experience in the operation and maintenance of high-pressure gas transmission and distribution systems, SNGPL’s transmission system extends from Sui in Balochistan to Peshawar in Khyber PakhtoonKhawa (KPK) comprising over 7,000 km of transmission and around 94,000km of distribution system. It has also expanded its activities as an engineering, procurement and construction (EPC) contractor to undertake the planning, designing and construction of pipelines, both for itself and other organisations. The company has recently embraced EN ISO 9001:2008 certification for Planning, Design, Procurement and Construction of Cross Country Pipeline Projects.

SNGPL serves nearly 5 million consumers in the domestic, commercial, general industry, fertiliser, power and cement sectors. The company’s sales from July 2012 to June 2013 were 552,272 mmcf, worth PKR 224.064 billion (£1.36 billion).
“This has been one of the exceptionally good organisations in the country,” says Mr M. Arif Hameed, MD of SNGPL. “You want the results, they speak for themselves. The company is providing quality services to a network spread over two provinces in an exemplary manner.”

SSGC’s Mr Siddiqui is proud of his company’s success in different areas, including IT, which has ultimately helped it in serving its customers better. “I think we are one of the most IT-enabled companies in Pakistan. On the front hand we have an entire suite of Oracle applications and we have a state-of-the-art building in customer service applications.”

The company's state-of-the-art technology has helped it save significant amounts of money by implementing some IT projects totally in-house instead of hiring external consultants: $1.8 million when upgrading the company’s Enterprise Resource Planning and more than $2 million when in the upgrading of Customer Care and Billing.