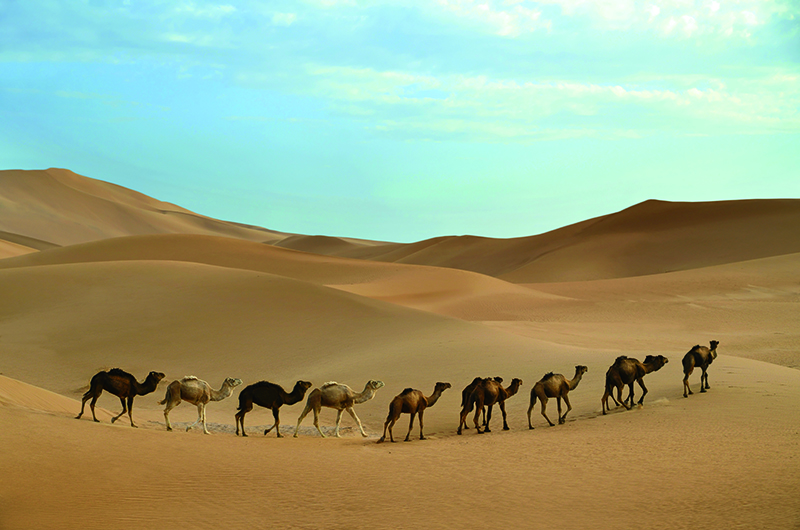 Looking at Egypt’s location – placed almost as if strategically between the Mediterranean and Red Seas – it is not hard to believe that Egypt has established itself as one of the world’s premier tourist destinations. Visitors from all around the world are enticed by turquoise sea running alongside miles of white-sanded beaches, year-round sun, Egypt’s long and layered history, and rich cultural heritage which includes, of course, the pyramids and the Sphinx.

All these characteristics endow Egypt with the ability of fulfilling the desires of all kinds of tourists: it is a popular destination for adventure, sailing, diving, eco sites, health and rejuvenation, resorts, cultural tourism, as well as religious tourism with sites of importance to both Christians and Muslims.

However, Egypt’s current growth in the tourism sector is a result of very hard work. Despite the 2008 economic slowdown around the world, 2009 brought almost no decline in tourist arrivals, and 2010 experienced a substantial growth of 17.6% (14.7 million tourists). Nevertheless, the January 25 Revolution in 2011 and its political consequences severely affected this booming market. Egypt’s tourism sector has suffered greatly over the last three years, going from $12.5 billion in annual revenues in 2010 to $5.9 billion in 2013. The June 30 Revolution, in 2013, and the subsequent travel warnings to Egypt in many Western countries have further damaged Egypt’s image.

Egypt’s comeback is in large part attributed to Hisham Zaazou, the Minister of Tourism. Over the past few years, Minister Zaazou has made it his primary concern to put Egypt back on the map as the attractive destination that it has always been known as. As proof of his success, tourism arrivals were up 70% in the third quarter of 2014 compared with the same period in 2013.

One of the most pressing issues on the minister’s agenda was the necessity to deal with the international perception of Egypt; something that, in the last three years, has changed drastically due to an outpouring of sensationalized negative reports of instability, as well as reports of terrorism in the country.

“We care for the welfare of our guests,” says Minister. Zaazou. “Through liaising and working with the Ministry of Interior and the Ministry of Defense, I can say with confidence that our cities are safe for tourists. I cannot feel comfortable telling people to come to Egypt if I know it is not safe.”

Abercrombie & Kent, a large multinational travel operator with international recognition and a recent recipient of various awards, is also committed to helping change the tarnished public opinion of a country that, underneath all the bad press, has an abundance of beauty and exotic stories to offer.

“We need to send a powerful message backed up by facts; no bus was attacked, no hotel was attacked and no tourist site was touched. We need to tell the world that the events of the previous years did not harm touristic activities and everyone in this country agrees that tourism is out of the political discussion,” highlights Abercrombie & Kent’s Regional Managing Director, Amr Badr, adding a message to those with a curiosity of visiting Egypt: “We respect you, we appreciate your interest and value for Egypt, and we will never harm your experience during your visit to our country.”

Travco, Egypt’s travel, tourism and hospitality empire, also emphasizes safety as a priority in their line of work. “As Egyptians, we feel safe, and we try to transmit this feeling to our guests,” says Amani El Torgoman, Travco’s CEO.

Another current strategy to further entice tourism to Egypt is to re-approach markets that were traditionally significant contributors in Egypt’s tourism sector before the political events of 2011, such as the U.S.

“I think the potential for American tourists is truly unlimited. We had impressive numbers prior to 2011 that we could easily triple by building stronger links between the American and Egyptian markets,” says Mr. Badr.

“Recently, I’ve received interest from a number of leading travel groups to re-launch and promote Egypt again after many years of stagnation from the U.S. tourism sector,” says Mr. Zaazou, adding that other regions – such as Japan, China and Latin America – will also play a significant role in further enriching Egypt’s tourism sector.

Although Travco is at the point of starting very soon to attract more North American tourists, they are in need of a strong marketing campaign to help them overcome the challenge with the negative publicity that continues to limit them.

“The media makes things look really bad, and they use footage from the riots from last year. Meanwhile, you’re sitting at a café enjoying a coffee, looking at the Nile,” comments Ms. El Torgoman.

Waiting for the perfect moment, the Minister of Tourism is preparing an integrated international campaign due to begin in the first half of 2015. “We feel Egypt is ready for a big campaign; we are ready to welcome tourists with open arms, like we have been doing for thousands of years.”