Article - December 20, 2011
In a world consumed by materialism, often the perfect adventures lay behind the bustling cities of Europe and deep into the cradle of humankind: Africa 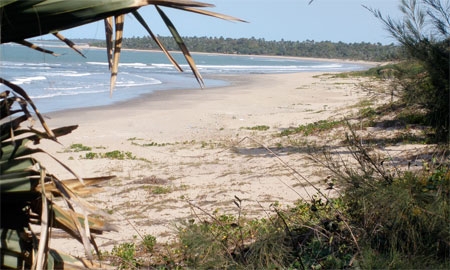 For many the options of South Africa, Kenya and Tanzania would be the preferred lucrative but rather expensive options to flee from the cold and enjoy the summer temperatures in half room and board “resorts.”

However, for a more holistic and adventurous option The Gambia is a destination not to be missed, located a mere 5-hour plane ride from Heathrow International Airport to that of Banjul. Be cautioned before continuing to read: the rarity of this gemstone hidden outside the Senegalese borders may make some want to stay forever, explained through the voice of two English gentlemen, James English and Lawrence Williams, who after years of searching for the perfect tourism project around the world found Makasutu on Christmas Eve in 1992.

When this area, located an hour away from the capital city Banjul, was discovered, two hundred palm trees had been cut down in this monkey rich forest calling for a change in plans- from a backpackers lodge to a cultural reserve that would nourish the land and encourage its wildlife to return, including the crocodiles!

Over the next years, 15 thousand trees were planted and 70 wells built to water them. The local people living on the land were encouraged to stay and participate in bringing life back to their homes.

Needless to say, word of Makasutu spread quickly and soon became a major hotspot attracting tourists from around the world looking for an alternative holiday break. To accommodate the influx of spectators, the dynamic duet made plans to develop the site, now known as “Mandina River Lodge,” into a five star eco lodge commonly found in Asian countries but never yet built in West Africa and without the burden of the time difference too! However, to maintain its tranquility and purity, English and Williams, opted for a limited number of guests, 12 maximum a night, and thus ensuring its exclusivity.

Nonetheless, other objectives laid deeper into the land, in a nearby village called Kubuneh, an initiative under the Ballabu Conservation Project.

In October of 2010 the owners of Mandina Lodge welcomed eight top street artists from around the world to paint the village of Kubuneh, hoping to attract sustainable business to the area by creating a living art village in the smallest country of Africa. This one of a kind international project dubbed “Wide Open Walls” include the work of London based graphic artist Eelus, along with other colleagues from the United States, France and the UK.

Experience the grandiose of Berlin streets painted across Baobab trees used to shade locals from the heat of the sun and perhaps, on lucky days, see a school of dolphins pass by the village on their way to the ocean.

Moonlit nights on the River

As the days comes to the end, slightly after the sun sets, dinner is served under the serenity of a clear starred night and the tide gently rocks guests to sleep, a site not to be missed from the comfort of each solar powered floating lodge is the 180 degree view of the Mandina Bolong (a heavenly branch off the main river Gambia) lit by glow flies that twinkle like fairy dust against the darkness of the river.

The rarity of that moment will be held on like a treasure for the remaining of the year, as many, in their big offices in Europe, reassure themselves that home is so much better… Or maybe not.
A sanctuary away from smart phones

The sunshine sets upon the Smiling Coast of Africa yet again, and as tourist wave good-bye to this unique treasure amongst the mangroves, they pack the cars and head East 170 km towards baboon island- the name says it all!

After a several hour long car ride following the river upstream, only to leave the car behind and be picked up by the lodge’s speed boat, behold the most remote area of The Gambia, lost amongst a series of islands, the tourists’ departure point being dedicated to the rehabilitation of Chimpanzees but infested with baboons, as well.

In meter high double safari tents, only accessible through a small deep man made rock path, guests arrive to what seems like “the end of civilization.” Amidst the fresh air, outdoor private showers overlooking the river, lay deep in the island the closest animal to a human, apes.

In the afternoon, enjoy watching these peculiarly similar creatures being fed by their caretakers. Be awed by their ability to crack papayas open and use the skin as cups to drink from the river, or watch closely as they dip into the water to refresh their bodies from the simmering sun.

Beware, however, of the temptation to join them in their games, for one never knows what is watching from not too far away.

Just as the apes and monkeys take a quick swim enjoying what appears to be a “lazy” river, like those that one often times splashed around in as a child, a hippopotamus takes notice of the unfamiliar rectangular object in its territory.

The boat, with tourists, approaches the most dangerous animal of Africa, getting near enough to take as many pictures as the camera can hold. More hippopotamus approach, the guide turns off the motor, and the boat gently sways to the rhythm of the water, while the guests have the pleasure to take in the surrounding as the sun gently sets amongst the trees. For a split second, the feeling of a photographer from National Geographic becomes overwhelming or perhaps the romanticism brings one to believe that they are at the right time, at the right moment, as loved ones reach for each other’s hands.

The call of the wild begins

As the evening sets, showers are run and guests meet at the bottom of the hill for a collective homemade dinner around a beautiful wooden carved table lit by candles, they pass bowls from one to another full of chicken yassa, beef domada and a hearty roasted pumpkin soup. Wine is poured and the host, Matthew Selinske, begins to tell his stories amongst the chimps, calling each one by the their name with the fondness clearly shown for a sister or a brother.

After dinner, the table is cleared, some guests trek their way back to their rooms with lanterns while others decide to stay on the deck gazing into the blackness of the river and listening to the sounds of the wild. Contentment is clearly in the air.

The show must go on: Kartong beach

Once again, visitors leave with a sigh, knowing that that weekend in The Gambia is likely to be reminisced throughout their lives. But the show must go on and guests pack the boat, each one thanking Matt for his genuine hospitality.

Before waving good bye at Banjul Airport, one last pit stop is required at Kartong beach, home to Sandele Eco lodge and for those on a budget, Boboi Bed & Breakfast.

Think Pirates of the Caribbean meet Tom Hanks in a Message in a Bottle. Rarely is a white sand beach, with reasonable water temperatures, not have a footprint along the coast.

At Kartong, enjoy the solitude of what could be a private beach where the closest thing to another tourist would be a cow, literally. Sip a cocktail while that tan finally settles in, just in time to bare the winter weather of Europe, or take a walk along the velvety sand beach in look out for sea turtles, vultures or what the tide may bring in.

Ultimately, the end of the perfect getaway always comes around… with the last gulps of the final sundowner in The Gambia, the moment has arrived to go back to the offices, schools, carpooling and the “joy” of a routine. Home sweet home, although this time around it may be a bittersweet return.

Lauren Ross
100% of 1
Sounds amazing! Will definitely look into travelling to The Gambia for my next vacation.
Maria Rodriguez-Rubio
100% of 1
Outstanding article! Next visit Gambia. Congrats!