The U.S. and Egypt’s alliance for peace in the region

Bidding for a seat in the UN security council for 2016-17, Egypt remains a strategic ally for the U.S. in the Middle East 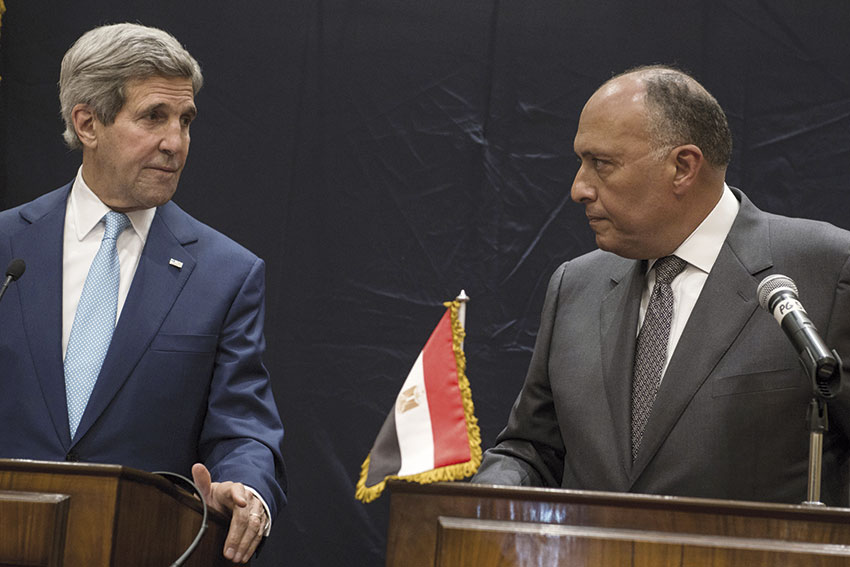 Egypt’s government and people have undergone significant shifts in recent years, but the country is emerging from the changes with a focus on a better future. Part of this focus includes a bid for one of the non-permanent seats on the United Nations Security Council for 2016-2017. The country’s Minister of Foreign Affairs, Sameh Shoukry, says that Egypt can bring to the UN – an organization of which Egypt was a founding member –  “a degree of knowledge and experience related to issues of consensus building for international communities.”

Historically, Egypt has played a central role in Arab politics. Its relationship with Saudi Arabia is just one example of the country’s involvement in regional and international politics. “Egypt has the necessary size and international political influence to support and build mutually beneficial relationships with its Arab brethren, particularly those in the Gulf,” says Minister Shoukry.

“Egypt also has the ability to highlight to the United States issues,” adds the foreign minister, “especially those pertaining to the region, where we might have greater insight and experience.”

While Egypt’s own government has experienced several seismic shifts in recent history, Egypt has maintained ties with its historical international partners. For example, Saudi Arabia and the United Arab Emirates both supported Cairo’s Supreme Council of the Armed Forces once Hosni Mubarak was no longer in power, and though the relationships cooled some with the election of the Muslim Brotherhood in June 2012, the reinstatement of military rule in July 2013 led to an increase in support from the Gulf area’s more conservative states (including the U.A.E., Kuwait and Saudi Arabia).

Egypt and the United States have also worked together through the years, both countries benefiting from a stable and strategic relationship. “We have a plurality in terms of interest relating to many international issues,” points out Minister Shoukry, who served as Egypt’s ambassador to the United States from 2008 to 2012. Egypt has received assistance from the U.S. for its military, resulting in what the minister calls “a better synergy” between the two countries. Equally important, Egypt has been able to act as a stabilizing peacekeeping force in the region.

The two nations have also worked together to fight terrorism. The foreign minister is proud that Egypt has taken a leading role in fighting ISIS: “We were among an initial smaller group of states that initiated the international coalition against ISIS… [Our actions are] giving a signal to the region of our political support to eradicate ISIS and expand the war on terror.”

In addition, Egypt has worked with nations including the U.S. on other military and peacekeeping projects, as well as conflict-resolution efforts in Africa, in particular. It also focuses on issues like disarmament, as an advocate for non-proliferation and nuclear disarmament.

Egypt is building relationships with other countries including Brazil, China, India, and Russia. While the United States does not always see eye-to-eye with these nations, Egypt has no qualms. “We are striving to have balanced relations with all the members of the international community,” says the minister. “They are all eager to assist Egypt in facing challenges. We should base our relationships on the principals of cooperation and mutual respect.”

The same is true for Egypt’s relationship with the United States. While the two nations do disagree on specific issues and policies at times, Minister Shoukry points to the history of their ties. “I believe we have matured in terms of our relationship. We are able to handle divergence on certain issues in the spirit of friendship.”

Prime Minister Ibrahim Mahlab fully agrees, saying, “When you have had a long-standing strategic relationship as we have with the U.S., you can withstand any challenges.”

This ability is important, according to the foreign minister, because “We live in a shrinking world where cooperation and mutual understanding of each other’s needs reinforce the collective desire for a better environment for ourselves and our children.”

The relationship between Egypt and the United States is not limited to military and diplomatic issues, however. “The U.S. is one of the largest direct investors in Egypt, and we represent a very important and growing market for the U.S.,” Minister Shoukry explains. “We have economic potential and return on investments that U.S. companies have taken advantage of over the years.”

PM Mahlab adds, “We are very thankful for the American Chamber of Commerce and for all of the American businesses who have contributed to Egypt’s growth over the years. Most of the American investors have done a great job and are very welcome in Egypt.”