Article - March 7, 2013
From functional pieces to art form, Kuwait’s Bedouin woven items have risen to fame as a handicraft that embodies an essential part of the nation’s character 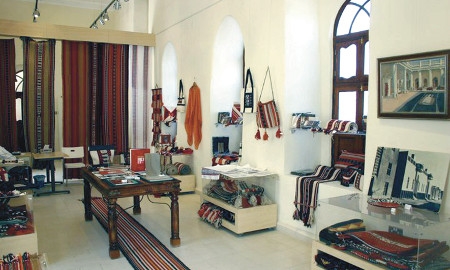 THE SADU HOUSE IS A DELIGHTFUL MUSEUM SHOWING THE ART OF BEDOUIN HANDICRAFTS, AND A GIFT SHOP WITH ALL MANNER OF WOVEN ITEMS FOR PURCHASE
SHARE

Numerous museums in Kuwait showcase the country’s history, its archeological findings, its art and even artifacts and information on the Gulf War. However, there is one unique museum that stands out for its portrayal of the beauty and tradition encompassed in Kuwait’s Bedouin handicrafts, namely Sadu weaving.
Aptly called Sadu House, it was originally established in 1978 as a private initiative by a group of Kuwaitis headed by Sheikha Altaf Al-Sabah, keen to preserve the traditional weaving, considered an intrinsic part of the nation’s cultural identity. By 1984 there were 300 Bedouin women registered in the Al Sadu Project.
Sheikha Altaf, who used to work as an anthropology professor at Kuwait University, recalls that her students had very little contact with their own country’s history. “Every time I said, ‘Let’s go to the Kuwait Museum,’ they said, ‘We don’t know where the Kuwait Museum is.’ There should be more of an understanding. I believe you must have a better understanding of where you come from, of how this country started,” she says.
Originally she had pushed for an ethnographic museum; however, this idea never came to fruition. When the idea to open up a museum of traditional weavings came up, Sheikha Altaf immediately saw how she could use this as a way to preserve crafts and material culture.
“So I worked and I gave a lot of myself because I am passionate about the idea of identity and reinforcing identity through material culture,” she says.
The Gulf War nearly brought about the end of the Al Sadu Project, as many of the weavers either lost interest or were busy trying to piece their lives back together. Not ready to give up so easily and frustrated by the way rapid modernization was doing away with some historic monuments, including many old houses, Sheikha Altaf sought help from some friends at UNESCO who suggested she consult an Indian woman, nicknamed the Philosopher of Crafts. Already having worked in Africa, Iran and India on preserving traditional handicrafts, this craft guru collaborated with Sheikha Altaf.
“She said the best way forward for any craft is to not treat it as a charity but to treat it as a competitive item. It has to be competitive and it has to be functional or else it will die,” says the sheikha.
A quick glance around the museum’s gift shop shows just how the project, which became the Al Sadu Weaving Co-operative Society in 1991, has turned the traditional Bedouin tent dividers and saddle bags into decorative and functional items more relevant in today’s world: handbags, wallets, rugs, table runners, and scarves, just to name a few.
Whereas nowadays the weavers themselves are the shareholders and receive proceeds from gift shop sales, in the past, weaving merely formed part of everyday life.
Sheikha Altaf explains: “These ladies didn’t weave for economic gain, even in the desert. They had to weave because it was part of their domestic job. They had to clean, they had to take care of the house, they had to bring up the children, they had to cook and they had to weave. So, they weren’t professional craftswomen or master weavers. In their household, weaving was just part of their function.”
What makes their work so intriguing, however, is the flare they added. Rather than sticking to the natural black, white and brown colors of the wool, the Bedouins went an extra step.
“They had this genius in them, this inherent beauty, and they started beautifying, putting on adornments and colors. And then these very basic functional items in time became art pieces,” enthuses Sheikha Altaf.
Visitors to the Sadu House can take a walk through time and see the process of fleece spinning, dying and weaving that the nomadic Bedouin tribes used in the desert setting, as well as the urban-style weaving of the bisht, or man’s cloak, and the delicate metal work and embroidery that were used to adorn men’s clothing.