Where energy production and environment exist in harmony

Article - September 14, 2011
As the government of Costa Rica has put environmental conservation first and foremost in its agenda, electricity production has succeessfully become more than 90% ‘green’ 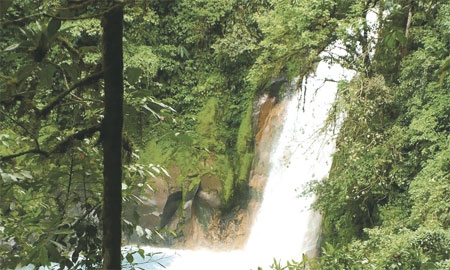 All too often, the greatest victim of economic development is the environment. Costa Rica, however, has found a way to strike a balance between environmental conservation and GDP growth through government legislation and popular support.

“Production, economic and social development, and care for the environment go hand in hand; for us they are inseparable,” claims Minister of Environment and Energy Teofilo de la Torre Argüello.

Sometimes even erring in favor of environment over economy, Costa Rica’s laws over the past 20 years have become gradually more protective of both society and nature, and all economic activities must fall in line if they are to move forward.

“Also important is not just conservation but also production in harmony with the environment,” says Mr. de la Torre, “and in this sense what the legislation does is establish rules so that any type of industrial, commercial or business development complies with a minimum set of requirements in order to integrally protect the environment. One of the duties of this Ministry is to ensure that mankind’s actions are congruent with the environment.”

All construction permits and new projects, for example, go through a Ministry of Environment and Energy office, where a thorough environmental impact study is conducted if deemed necessary. The Ministry also runs a special administrative environmental court to directly handle such matters, thereby reducing bureaucratic hold-ups and freeing up space in the regular courts.

The energy sector is notoriously one of the most damaging activities in any given country. Costa Rica is exceptional in this respect, and the mere fact that one ministry oversees both energy and environment reflects the government’s insistence that they remain harmonious.

Already producing  upwards of 90% of its electricity from renewable sources, Costa Rica aims to go 100% CO2 neutral in a decade’s time. According to Alfio Piva Mesen, First Vice President of Costa Rica, hydroelectric dams produce the majority, with geothermal energy coming in second, at 14%, and eolic third, at 8%. Raising geothermal contribution to 24% and increasing wind power slightly would allow the country to be among the world’s first to rely wholly on renewables. The task would remain, however, to clean up Costa Rica’s vehicle emissions.

“If electricity is generated by renewable resources, then electricity won’t be causing global warming; it’ll be the petroleum,” comments Mr. de la Torre. “We imported US$2 billion of oil [in 2009] of which US$1.6 billion was used for fueling vehicles. We must find the way to reduce this consumption.”

The Ministry has begun researching alternatives to petroleum, such as biofuels, alcohol, and biodiesel, and welcomes private sector investment in this arena. In identifying the country’s existing environmental faults (for example, river contamination and solid waste disposal), the government is also unearthing new solutions.

Mr. de la Torre would like to see the gases produced naturally in landfills put to good use. “An electric energy producer could make the most out this methane gas. We’re encouraging the development of methane-based energy plants in each municipality, which would then stream that electricity into the public electricity networks. This would not only clean up the environment, it would also create wealth as a commercial activity.”

Looking further into the future, when the world’s oil resources are depleted and gasoline-powered vehicles are a thing of the past, the Minister foresees that cars will run on electricity, and eventually on hydrogen. This, he says, is one of the main reasons why it is more important than ever that electricity proceed from renewable sources and that there is enough to cover both vehicle needs and industry.

For now, Costa Rica’s electricity demand is rising nearly 6% annually, signaling a need for greater private sector participation. Currently, experts claim that the national electric company (ICE) lacks the agility to undertake more projects simultaneously and private investors would be welcome to collaborate much more in energy growth. Furthermore, the new investment law maintains that ICE will continue acting as  the national entity that unites the energy-electricity sector, while allowing new participants to enter – new private generators that are not hindered by the limitations ICE has now.

Mr. de la Torre highlights that US$9 billion are needed over the next 10 years to double electricity capacity, and the private sector is invited to explore Costa Rica’s wind, geothermic, biomass, and solar potential – and in the future, the possibility of hydrogen and other technologies that will surely be discovered. “Technologies become obsolete very quickly,” he adds. “This is one of the reasons why the state decided to involve higher private participation in the sector, because one of the state’s defects is its slowness in acquiring technologies, goods, or services as it must go through public tenders.”

The government’s environmental policies enjoy popular support to the extent that some economic activities have actually been curtailed in favor of protecting nature reserves. An excellent example is the case of a world-class gold mine, which has remained untouched due to the fact that 85% of Costa Ricans are against the extractive industries.

“We believe there are more sophisticated ways of producing greater wealth that don’t require extracting and damaging the environment,” says the Minister. “From here on out, we wish our wealth to come from elsewhere, and this is something the Costa Rican society is demanding.”