Article - April 30, 2014
Foreign direct investment in Pakistan’s oil and gas sector totalled $258 million between July and January. And while exploration efforts have been going at full steam, what has been discovered so far may very well be just the tip of the iceberg 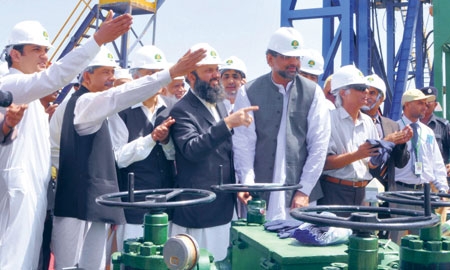 “Why invest in Pakistan?” asks Saeedullah Shah, Pakistan’s Director General for Petroleum Concessions. “The answer is very simple. [Our] investor-friendly Petroleum Policy 2012 is full of incentives for E&P companies; one of the world’s best online data banks is available here; [and] Pakistan has a huge unexplored hydrocarbon potential.”
One example of this is in Pakistan’s Indus Delta and offshore fan, which has a sediment wedge that ranges up to 12km in thickness, featuring geologic characteristics comparable to other fertile petroleum producing fan systems in the world. Despite being one of the world’s largest submarine fan systems, the region is for the most part unexplored.

Only nine wells have been drilled since the 1970s, seven of which were drilled in water depths less than 200m.
For Pakistan, areas like the Indus Delta are a source of optimism – and, officials hope, a signal to potential investors that Pakistan is rich with opportunities to form mutually beneficial partnerships with global companies. Indeed, investment and development could close the energy gap Pakistan is currently experiencing, and lead to big gains for potential investors.
“Onshore in Pakistan from north to south, in the lower Indus basin and in the Sulaiman Fold Belt Basin, among others, discoveries have been made. The trick in doing some accelerated work is to do some high quality processing and interpretation to be able to build an inventory of drillable prospects,” Tariq Khamisani, President of United Energy Pakistan (UEP), says.
Companies like UEP know a good opportunity when they see it. UEP’s investments in the country have risen to $300 million. “The first year with UEP we drilled 31 wells, most of them exploration, and we made some discoveries. But before we did the wells we did a carpet 3D sizement, which is worth $200 million, doing the sizement over a year and a half. Last year we drilled 61 wells,” explains Mr Khamisani.
In the past, UEP collaborated with BP, investing $50 million a year on surveys, but eventually the British company pulled out due to portfolio choices. Mr Khamisani believes that to get more foreign expertise involved, the government must “step up and put up the financing, take some risk and get the work started. Only then will people start putting their technology and money into the exploration of offshore Pakistan. Once the discoveries are made, I promise you the Exxons, the BPs and the Shells of the world will all stand in line wanting a piece of the action. It would be great to have a partner like BP to come and join us in the offshore work. They’ve spent $50 million understanding Pakistan, so they have a lot of knowledge.”
“UEP is a United Energy Group (UEG) Hong Kong stock exchange listed company, and is the jewel of the crown in the group’s portfolio,” he adds.

Alexandar Dodds, Vice President of E&P at MOL Group, also expressed his confidence that MOL Pakistan will be able to develop Tal Bloc to produce even more than its current level of 300 mmcfd and 16,000 barrels of hydrocarbon condensate. MOL will offer farm-in opportunity to state-owned OGDCL in its international blocks, and OGDCL will provide farm-out opportunity to MOL in its operated blocks.
In addition, MOL will share its experience and carry out studies to enhance production from OGDCL's matured fields using latest EOR and lOR techniques.
For Pakistan Petroleum Limited (PPL), 2014 is already proving fruitful. In late March, the company announced a gas discovery at one of its exploration wells in Naushahro Firoz Block in Sindh. Preliminary analysis suggests the find to be tight gas. PPL partners with various international E&P companies like Eni and OMV in exploring and developing dozens of blocks both in Pakistan and beyond, in places like Yemen and Iraq.
Orion Energy is also interested in bringing foreign investment into Pakistan for setting up a fast-track gas-based power project with PPL as a joint venture partner to add much-needed power to the national grid.
These are not the only examples of Pakistan’s successful collaboration with international companies. “PARCO (Pak Arab Refinery Ltd) also has a joint venture with Total of France, which is the world’s third largest organisation,” Tariq Rizavi, PARCO’s Managing Director says. “We recently decided we should seek this opportunity and buy Chevron and by doing so we will jump from 300 pump stations to 800 pump stations.”
Furthermore, Mehran Mirza, CEO of Premier Oil (which has interests in six fields in Pakistan, where it’s been present since 1988) speaks highly of Pakistan’s previous experiences in forming joint ventures, and its future possibilities for further development.
“We have partnerships with OGDCL, DHP, Eni and these have been very positive partnerships over the years,” Mr Mirza says. “The pro-communication and the positive role that Premier has played in engaging them; we have built good relationships with them.”

Mr Mirza adds that potential investors need not worry whether Pakistan will meet global standards for gas and development. “We specially have concessions with ENI and BHP. They have zero flaring of gas and similarly all processes we try to ensure are up to the international environmental standards because we are working with international companies, so we cannot have lower standards.”
Companies who are looking to partner with Pakistan have the fluidity to build the type of agreement that works best for their specific venture. “State-owned companies can operate independently or as joint ventures or as shareholdings. Many of our public sector companies go into risk-sharing shareholdings with these companies. Sometimes we are the operators, and other times they are the operators. Sometimes they are the third-party operator,” Shahid Khaqan Abbasi, Pakistan’s Minister for Petroleum and Natural Resources, says.