Article - December 18, 2013
Besides irrigation the River Nile has huge potential for hydropower generation, while investment opportunities in renewables are also abounding 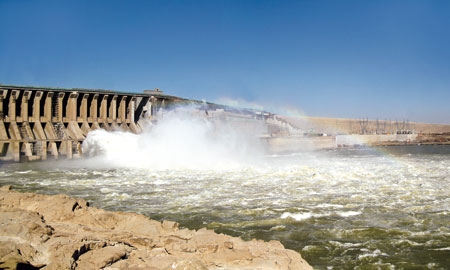 Amidst today’s ultra-modern, increasingly globalised and highly connected societies, it is absolutely without doubt that basic access to electricity remains inseparably correlated to our economic growth and advanced societal development. For most of us, it is something that we consider as requisite to the way in which we go about living our lives.
However, as in many other developing countries, less than half the population of Sudan currently shares the privilege of direct access to electricity, yet it is a provision with which the Government has employed increasing focus in recent years in order to spark improvement; bringing greater electrical power to really energise the African nation.
In a country which not so long ago was only capable of producing 200MW of electricity, this has increased dramatically over the last decade with capacity standing now well into the thousands of megawatts, meaning power is reaching far more people in more remote areas, with shortages and outages also becoming much less of an occurrence.
While Sudan’s energy mix has traditionally been dominated by oil, the recent power push has largely been generated by better investment in hydroelectricity. For example, the Chinese funded £1.2 million, 174km Merowe Dam situated on the River Nile finished construction in 2009 and consequently doubled the country’s power generation at the time.
Furthermore, in one of the biggest development projects to hit Sudan lately, the Roseires Dam on the Blue Nile in the south of the country was expanded earlier this year (this time by Gulf donors), boosting not only the existing dam’s power supply, but also further downstream in the Merowe plant, as well as improving irrigation and agricultural productivity in the area.
With these projects alone having dramatically enhanced Sudan’s power generation capacity in such a short space of time – and with the demand for electricity constantly growing amongst the country’s rapidly urbanising and industrialising population – along with initiating projects to increase generation further still, the Government is now working to establish an extended national grid network.
Under the Ministry of Electricity and Dams, five state companies replaced the National Electricity Corporation in 2010 with the responsibility of generation, transmission and distribution of electricity in Sudan, while also charged with improving overall efficiency and creating a more attractive environment for investors.
One major joint mission of these companies is to connect all the states of Sudan with one stable electrical transmission network by the year 2015. The role of foreign investment is, of course, essential to achieving this goal, with the installation of transmission lines expected to see major growth amidst the wide availability of investment opportunities. Already Sudan has seen significant funding by the Chinese Government in its power line development initiative, while the latest work that commenced in June on the Abu Hamad transmission line is being supported by Qatar.
And with so much more anticipated in terms of Sudan’s electrical energy industry on top of the advancing conditions of the business climate, now is the right time for electrical generation and distribution companies to discover new opportunities and markets. Indeed aside from the country’s evident vast potential to produce power from hydro sources along the River Nile, there are also great prospects in the area of renewable energies.
“In addition to the transmission lines, we also have thermal plants which are going on now and connecting the whole of Western Sudan,” says the State Minister of Electricity and Dams, Dr Tabita Boutros.
“We are focusing on renewable energy, such as thermal, solar and wind generation, and we are also looking at biomass and geo-thermal.”
In a region which has extremely high solar intensity, solar (as well as wind) installations can already be found in Sudan. However projects remain on a relatively smaller scale as the Government continues to seek greater foreign financing.
Furthermore, with Sudan’s enormous agricultural resources, biomass is also becoming a viable power generator – with Chinese investors again becoming the first to embark on a bio-energy project there.
And so, Dr Boutros (who is one of the female ministers that together account for more than 28 per cent of Sudanese parliamentary seats) along with the full Minister of Electricity and Dams are today keen to emphasise the need for the private sector to lead Sudan’s strategy for alternative energy – which is seen as key to increasing access, and thus, lessening deprivation.
“We want clean energy, cheaper energy and energy that people who live far away from the national grid can access. In turn, this will help reduce poverty.”