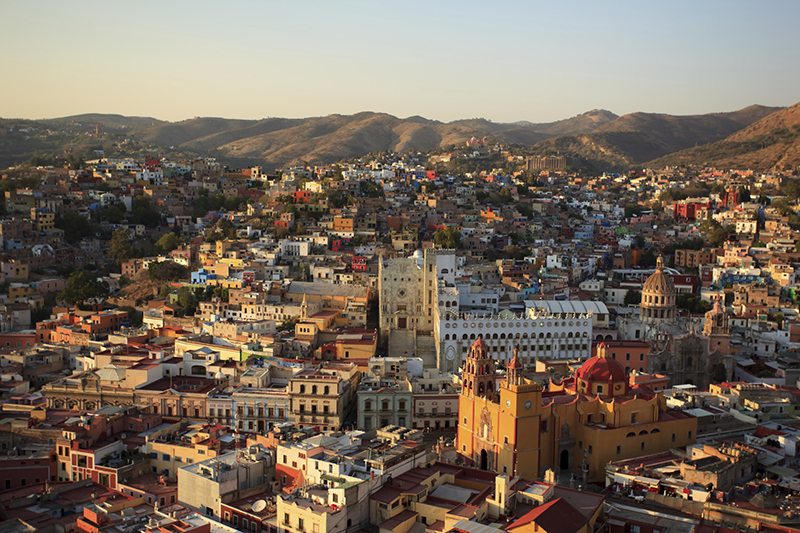 This is an exciting time for Mexico. Its economy is the 14th largest in the world in nominal terms; it has signed 12 different trade agreements with 44 countries; and its domestic market has more than 112 million people – the third largest in Latin America and the 11th largest in the world. With an urban population of 78%, the country’s statistics reflect its forward-looking attitude, making it a great choice for both business and leisure.

Querétaro Industrial Park is a prime example of Mexico’s momentum, driven by a focus on local and national economies, people’s needs and wants, and sustainability. Created in 1997, Querétaro Industrial Park provides first-rate infrastructure and services for over 120 national and international businesses from 16 countries, in an area about two hours from Mexico City. The park supplies and maintains hydraulic resources, and offers treated water, service water, and irrigation and drainage, along with natural gas, electric energy, and fiber optic lines for telephone, voice, and data. Professional maintenance, controlled access, and perimeter security offer peace of mind.

Sustainability is also important to the industrial park, which it promotes in several ways. The director of the park, Abel Baca Atala, is proud of the park’s accomplishments in this area. “The Querétaro Industrial Park was the first industrial park to earn the ‘clean industry’ certification, which we’ve won five consecutive times,” he says.

“Twelve of our clients in the park have earned similar certification, and many more are in the process of earning it. To this end, Querétaro Industrial Park offers several incentives, such as a discount on the maintenance fee of common areas that businesses pay monthly, and an additional discount on payments for water supplied by the industrial park.”

The area is also home to Zibatá, the first planned community in the state. The cutting-edge mixed-use development is the result of several notable companies coming together to create a project that captures the feeling of community. Zibatá values not only residents’ private lives but also the time that they spend away from home, giving residents plenty of public spaces to enjoy, including walking paths, lakes, parks, playgrounds, areas for open-air performances, and a golf course designed by Rafael Alarcón. Zibatá also offers plenty of places for shopping, visiting, and enjoying a cup of coffee with friends and family.

The successes of Querétaro Industrial Park and Zibatá are smaller-scale versions of the success visible in the state of Querétaro, which has one of the fastest-growing state economies in the country and one of the fastest-growing rates of both national and foreign investment. The area’s workforce is highly skilled, in part thanks to the state’s well-known universities. The state is also home to over 30 research institutions.

Connections to the rest of Mexico are facilitated by federal and state highways, railroads, and an international airport. In addition, Querétaro is the main non-beach tourist destination in Mexico.

Meanwhile, the success of the state of Querétaro reflects Mexico’s increasing momentum, particularly as a multifaceted tourist destination. President Enrique Peña Nieto has made tourism an administrative priority, creating the tourism cabinet to coordinate efforts by state governments, private investors, and all active players in the tourism industry.

Miguel Vega, Director of Zibatá, explains part of the country’s appeal for tourists this way: “Mexico is the principal tourist destination in Latin America and the 13th most visited country in the world, due in large part to the 32 cultural or natural sites that have been designated by UNESCO as World Heritage Sites.”

Mexico’s cultural heritage is one aspect that the tourism cabinet (SECTUR) wants to share with the world’s travelers. Claudia Ruiz Massieu, Secretary of Tourism, points out that “Mexico is home to pre-Hispanic cultures, but also living cultures; a very important colonial heritage but also a contemporary, cutting-edge cultural life.”

The country also promotes medical tourism to travelers, particularly those from the United States, who are interested in health and well-being. Mexico has a large number of spas and hot springs, and for tourists with health concerns, Mexico makes available high-quality, world-recognized treatments at a fraction of the cost north of the border.

Mexico is pouring efforts into seeing that the country’s destinations, products, and services complement each other. “Beach + culture + gastronomy: in one single experience we have a much more powerful destination,” Ms. Ruiz explains. The country’s geographic position gives it a unique, noteworthy biodiversity that the country and its tourism cabinet are keen to preserve. By working with the Secretary of Environmental and Natural Resources, SECTUR can ensure that tourism development projects meet environmental sustainability criteria. But sustainability is also social, ensuring that communities supporting tourism have a good quality of life as they share their areas with the world, and SECTUR emphasizes this as well.

Coordination between government, tourist organizations, and service providers means Mexico offers better integrated travel opportunities than ever before. And the level of optimism among players in the tourism sector is higher now than in previous years, thanks to the Peña Nieta administration’s policies.

“Our perspective for this six-year term is very positive,” says Eduardo Sánchez Navarro, Executive President of Grupo Questro, a major property development company in Mexico and name behind one of the country’s most famous beach clubs: Nikki Beach at Los Cabos.

“Mexico is living what we call ‘MEMO’, or the Mexican Moment. There are very positive things happening and the dynamic in President Peña Nieto’s government is completely changed. He’s brought in a different kind of vibe, energy and optimism for all Mexicans.”

Grupo Questro focuses on the areas of Los Cabos, Acapulco and Mexico City. It is in the former area where the group has its most ambitious project: Puerto Los Cabos. Covering nearly 2,000 acres of prime beachfront property, it boasts a Jack Nicklaus and Greg Norman signature golf course, various high-end hotels including the recently opened Hotel El Ganzo, a marina, and a shopping center.