With Egypt’s goal to generate 42 percent of its energy capacity from renewables by 2035, private investors have prime opportunities to reap the huge potential in solar and wind. 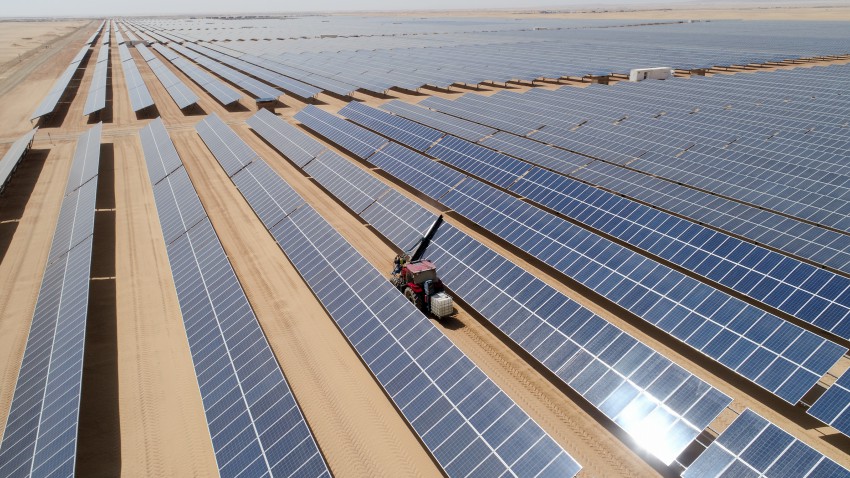 Regionally, energy demand is expected to increase three-fold by 2050, presenting MENA governments with a concrete timeframe to push ahead with renewable energy projects while phasing out fossil fuels.

Egypt’s Integrated Sustainable Energy Strategy is designed to tap 20 percent of the country’s electricity needs from renewables by 2022 and 42 percent by 2035, with solar the primary industry ripe for expansion in one of the nations with the greatest potential in that field on the planet.

Although total installed capacity of renewables in Egypt currently stands at 3.7 gigawatts, Mohamed Mansour, CEO and co-founder of Infinity Solar, which in 2014 qualified for the Feed-in Tariff (FiT) program, says there is vast potential for more.

“We’re looking to get into wind projects, and hopefully we’ll do that next year. We’re also looking to diversify where our plants are and to buy plants in the U.S. and Europe. We are looking to develop further plants in Africa through our network. Our target is to, hopefully, reach 10 gigawatts of generation by 2030. That’s a bit of a stretch, but if we manage half of that it’s an achievement.”

The International Renewable Energy Agency shares Mr. Mansour’s optimism. A recent report estimated Egypt could potentially generate up to 53 percent of its electricity from renewable sources by 2030, which would shave $900 million annually from the country’s energy bill.

Meanwhile, the World Bank’s Regulatory Indicators for Sustainable Energy ranks Egypt among the three fastest-improving countries in the world in terms of regulatory frameworks. The private sector already accounts for over 70 percent of investment in renewables and Mr. Mansour envisages huge developments on the horizon.

“Nationally, we’re talking about generation capacities of around 25-26 gigawatts of wind, and another 35-40 gigawatts of solar. So it’s a huge market. We have lots of empty land, lots of demand for electricity. If you come here with an open mindset then a lot of doors open and things move a lot quicker than you might expect.”

In July 2018, the International Finance Corporation assigned $660 million in funding to 13 FiT projects in Benban with a total capacity of 500 megawatts and The European Bank for Reconstruction and Development is planning to finance 16 further solar projects in Egypt with capacity of 750 megawatts.

Benban, a region considered the most ideal place on earth outside of Chile for solar power production, is one of Infinity’s major projects and a perfect example of the company’s commitment to improving the lives of people in their areas of operation; many employees at the $2.8bn development are local residents.

“It’s part of our DNA,” says Mr. Mansour. “We got into the solar business precisely for that reason. We don’t want to just make money; we want to help our country in a positive way. Not only are we reducing carbon but we employ and educate because our plants are not in the middle of the city, they are in the middle of the desert, where there are very poor villages. And we see the effect of our presence immediately.”

This viewpoint is shared by Muhammad Al-Fouly, Executive Director of the UN Global Compact Network Egypt. In addition to acting as an advisor to private industry as Egypt strives to meet the Sustainable Development Goals laid out as part of the Egypt 2030 initiative, Mr. Al-Fouly’s remit is to ensure that the needs of the population are first and foremost in the mindset of big business. Indeed, rather than viewing population growth as a negative, Mr. Al-Fouly espouses the benefits of a well-educated next generation, pointing out that Egypt has taken great strides in that area as part of the country’s reform program.

“The late Secretary General Kofi Annan praised our structure and made it clear from the very beginning: the Global Compact is there to give the global market a human face, and that is what we do,” says Mr. Al-Fouly. “We urged business to stop operating selfishly and forgetting their mandatory ethical requirements. We stressed that those businesses that are primarily there to tender to the needs of humans have to be ethically structured, accountable, and responsible.”