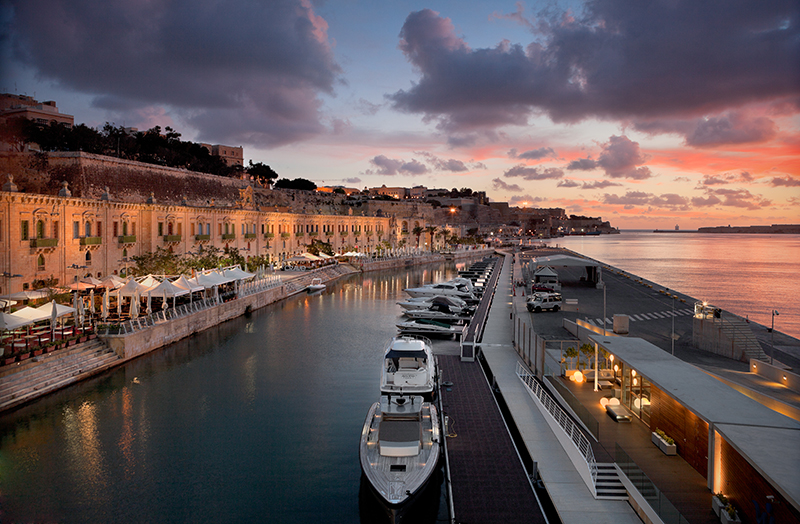 Valletta Waterfront can easily be considered the jewel in Malta’s crown. The row of 19 historical warehouses that line the harbour front appears like a majestic fortress rising above the sea and instantly transports visitors to a distant past that stirs the imagination. It’s no wonder filmmakers were inspired to make it the backdrop for Hollywood blockbusters like Troy and Gladiator.

The site is operated by Valletta Cruise Port, which took over management of the harbour’s ferry and cruise operations and 48,000 square metres of prime water front property. The harbour has undergone a makeover since the company inked its 65-year lease with the government in 2001 and millions of euros have been spent to restore the harbour’s ancient façades, rebuild structures destroyed during World War II and renovate terminal facilities.

This year 530,000 cruise passengers from 380 cruise liners will pass through the port, that’s down from a high of 610,000 in 2012. The difference is due to one cruise liner’s drop in passengers. But planners expect 2016 to be a banner year with projected numbers to reach the levels seen in 2012.

Driving traffic to the Valletta Cruise Port is part of the country’s overall tourism strategy, says Steven Xuereb, CEO, who praises the recent decision by the government to include the company in its tourism policy committee.

“Cruise ship passengers are not included in the 1.6 million tourists that visit Malta every year,” says Mr Xuereb.  “But they still make a great contribution to the economy.”

Visitors from cruise ships don’t stay overnight in the city, so they are not counted as tourists, but planners see potential in developing this part of the tourism business. Tourism accounts for 23 per cent of the country’s GDP and one third of Malta’s population is employed in this fast growing sector.

“This is a perfect opportunity to market Malta to the cruise passengers, because we are bringing them in for a few hours, and if you give them a good taste of Malta, and a good experience, they will come back and they will tell their friends and family about the experience,” says Mr Xuereb.

Valletta Cruise Port played host earlier this year to a private event, one that took three years to plan and involved 900 workers. German investment marketing company Deutsche Vermogënsberatung (DVAG) chartered four ships to bring 7,000 visitors to the harbour, for an all day event to celebrate its 40th anniversary.

The ships were greeted with a full gun salute and a water display by tugboats, and among the evening’s highlights was a light and pyrotechnic spectacle.  A special stage was built over the water at one of the marinas for live performances by artists that included Gloria Gaynor, Captain Jarrett and David Garrett.

“It really opened our eyes to the potential in this area,” says Joseph Zammit Tabona, Valletta Cruise Port, Chairman. “We learned from one of the event organisers that there are only 12 places in all of Germany that can host an event like this. I’m very proud that we did it here, in tiny Malta.”

The success of the DVAG event is likely to inspire more corporate events and make the harbour a venue for an array of attractions.

“I think our project fits in with the government’s general view of the grand harbour because the idea is that this side of the harbour, where we are, will be developed as an entertainment area, and all cargo is being shifted to the other side of the harbour. The idea that what we did here will continue along the coast,” says Mr Xuereb.

Another strategy aimed at generating revenue is to develop the company’s homeport business and make Malta more than just a stop over for cruise passengers. “I think that creates the opportunity for people to stay in Malta as well as getting on board and getting off in Malta; and that has more value for us and the economy as a whole,” adds the CEO.

Mr Tabona has been brainstorming new ways to make Malta a draw. Relationships with cruise liners need to be strengthened, but the executive is also thinking outside of the box, suggesting that the country’s size and attitude could make for offering tourists novel experiences such as dinner in an exclusive private home – the prime minister’s home perhaps?

“You are not likely to meet the Prime Minister of the UK on your vacation,” he says, “but because we are small and everyone is willing and very business oriented; our ministers and decision makers are accessible, and they can actually make things happen.”