A diplomatic heavyweight in a volatile region, Egypt is an important ally and strategic partner of the U.S. in the fight against terrorism across several fronts in the Middle East and North Africa. 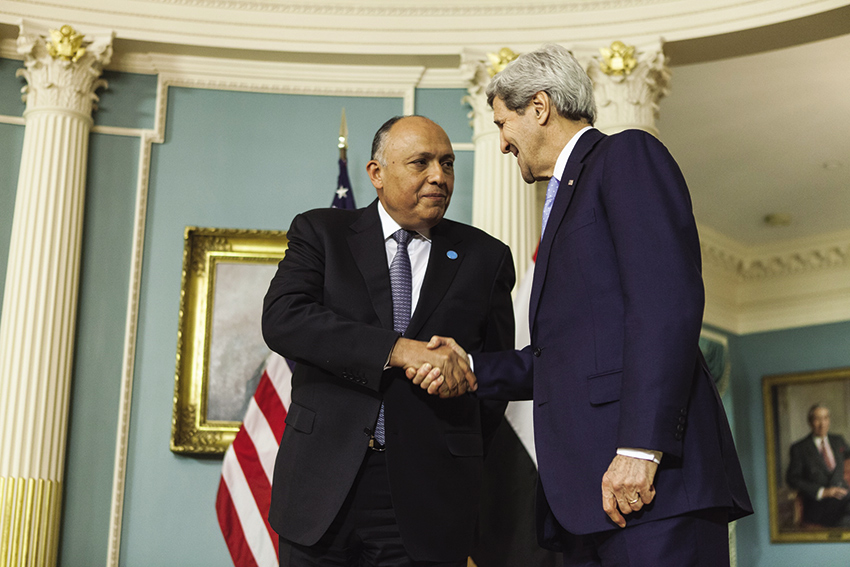 EGYPT’S FOREIGN MINISTER SAMEH SHOUKRY BEING WELCOMED BY U.S. SECRETARY OF STATE JOHN KERRY DURING A VISIT TO WASHINGTON.
SHARE

For the most part of the second half of the 20th century, Egypt, the most populous Arab nation, was a bedrock of stability and a diplomatic heavyweight in a volatile region.

But that was before 9/11, a time when the situation in the Middle East was – seen from hindsight – much more straightforward than it is now, with most of the Arab world under the control of strong, albeit autocratic rulers.

Now, a look at a map of North Africa and the Middle East shows better than any foreign policy paper how deeply the situation has changed.

Egypt is surrounded by three war-torn, ungoverned countries: Libya, its neighbor to the west, and further afar to the east, Syria and Iraq, with Israel in between.

And of course, a new enemy has emerged, overshadowing Al Qaeda in brutality and terror: the so-called Islamic State, whose stronghold is in Iraq.

Egypt itself has undergone radical transformation and turmoil in the past four years. Since the Egyptian Arab Spring toppled President Hosni Mubarak in 2011, after 30 years of iron-fist reign, the Islamist Muslim Brotherhood came to power in 2012 through democratic elections, only to be removed by the army after huge demonstrations of dissent in 2013.

The current President, Abdel Fattah El-Sisi, formerly head of the Egyptian armed forces, was elected in May 2014. Parliamentary elections are scheduled to take place before the end of this year.

But this era has left a lasting legacy: the peace between Israel and Egypt still holds and the two countries now have quite good working relations.

The Egyptian Arab Spring and the events that followed have left the United States without a clear policy towards their important Arab ally.

According to a background paper produced in March 2015 by the Congressional Research Service, which provides policy and legal analysis to the House and Senate, “Egypt’s role in the so-called Arab Spring of 2011 briefly elevated the country toward the top of the U.S. foreign policy agenda, as officials tried to delicately navigate a transitional period that witnessed an existential power struggle between Islamists and the military.

After a two-and-a-half year period of U.S. efforts to promote a democratic transition in Egypt, the return of authoritarian rule that began with the military’s July 2013 takeover has left U.S. policymakers in a quandary.”

In short, the Obama administration’s view is that full democracy is the surest way to prevent and fight Islamist radicalism and terrorism, while the El-Sisi administration stresses the urgency of the situation and views political Islam as an existential threat.

But over the past few months, a third way has been emerging: the idea that the best response to both radicalism and the Egyptian people’s aspirations is to strengthen Egypt’s economy not for the profit of the well-to-do, but for the whole population in an inclusive manner.

The fact that the U.S. Secretary of State, John Kerry, attended the Egypt Economic Development Conference in March, was in itself a powerful message. In his address, Mr. Kerry said, “the United States is committed to strengthening the partnership with Egypt.

How Egypt develops in the coming years, how it succeeds, and how it recharges its economy will not only affect near 90 million Egyptians, but it will also have a profound impact on the entire region.

It is strategically important to make certain that Egypt can move along the road to development and to the full achievement of its democratic aspirations.

I reiterate the support of [...] the United States for Egypt as it undertakes significant reforms and works toward the economic transformation that all the people of Egypt are hoping for.”

Mr. Kerry also expressed unequivocal support for Egypt’s efforts against terrorism, stressing, “the important role that Egypt is playing in the coalition against ISIL and the challenges of violent religious extremism that is manifested in many ways in the region,” and that “we have all been deeply shocked and saddened by the recent terrorist attacks, including those in Egypt and the grotesque murder of 21 Egyptian Copts in Libya.”

Mr. Kerry was referring to the murder by ISIL of a group of Egyptian Christians in Libya, in February.

As the situation in Iraq, Syria and Libya worsens and the scale and scope of jihadist attacks increase – as shown in late June with the simultaneous attacks in the Sinai Peninsula (17 Egyptian soldiers killed), Tunisia (38 tourists murdered on a beach in Sousse), and Kuwait (27 worshippers killed in a Shia mosque) – Washington has also taken the decisive step to resume military aid, which had been suspended by the Obama administration two years ago.

On  March 30, the White House announced that President Obama had directed the release of 12 Lockheed Martin F-16 aircraft, 20 Boeing Harpoon missiles, and up to 125 M1A1 Abrams tanks.

This was “in the interest of U.S. national security,” said a spokesperson from the National Security Council.

The decision was announced after a telephone call between Mr. Obama and President El-Sisi in which they also discussed the turmoil that is gripping the region.

Later, in June, Washington announced it had delivered two navy vessels to Egypt, doubling its total fleet of Fast Missile Craft to four, according to the U.S. embassy in Cairo.

On the domestic front, the most pressing security issue for the Egyptian administration is the ongoing insurgency in the Sinai Peninsula, where terrorist groups seem to be gaining strength, as attested by the June attacks.

The Sinai insurgency comprises a series of actions by Islamist militants in the Peninsula, initiated in early 2011 as a fallout of the Egyptian Revolution. The waves of military and security campaigns have had little success in ending the crisis though.

Between 2004 and 2015, the Sinai insurgency has grown from mainly an urban terrorism campaign of bombing soft targets (such as the Taba Hilton in 2004) to a structured, low-to-mid level insurgency aiming primarily at hard targets (such as Battalion 101 Camp in Al-Arish, the headquarters of the military campaign).

In February, when he received in Washington the Egyptian Foreign Minister, Sameh Shoukry, Mr. Kerry said that Egypt is an “increasingly critical partner” in counterterrorism efforts and that it “is working with us in the Sinai against terrorism.”

The same month, President El-Sisi called on the United Nations to approve a new coalition for airstrikes in Libya, where the jihadists have set up their first major affiliate outside of Iraq and Syria.

He argued that the Islamic State group in Libya is not just a threat to Egypt but to Europe as well. “I want to say humanity will judge us if we do not fight against terrorism and protect humanity,” he told France’s Europe 1 radio.

French President Francois Hollande’s office said he and Mr. El-Sisi both “stressed the importance of the Security Council meetings and that the international community take new measures to confront this danger.”

During his visit in Sharm El Sheikh, Mr. Kerry also recognized that Egypt is not only “working with us in the Sinai against terrorism” but also “with respect to Gaza and [that it] helped enormously in the effort to try to bring the war of last summer to a ceasefire.”

Furthermore, Egypt is “working with us on the issue of the Palestinian-Israel peace process, as well as on Libya, Syria and Iran,” he added.

Another front on which Egypt is active is Yemen, where it is taking part in the Saudi-led intervention against Shia rebels, launched in March. In June, Foreign Minister Sameh Shoukry reiterated his country’s support for achieving stability in the crisis-torn Arab country.

“Security in the Gulf is an integral part of Egypt’s security,” he told Al-Ahram newspaper, adding that Egypt and Saudi Arabia share a “common vision” and “identical stances” on the war in Yemen.

More than 2,600 people have been killed, half of them civilians, and hundreds of thousands displaced in the turmoil, according to the United Nations.

He added that Egypt continues to work together with its Arab allies to bring into effect a military force aimed at combating jihadists, including the Islamic State group.

“We are working with our [Arab] brothers to bring this idea into force,” he said. Arab League military chiefs decided in March to set up a region-wide force, with members given four months to agree on its composition and mode of intervention.

As danger looms in increasingly vast swathes of the Middle East, Cairo is keen to reaffirm its role as a leading Arab nation.

Perhaps most importantly to this, given the current global debate about the role of Islam in politics, is how Egypt – home to the world-renowned Al Azhar University, one of the oldest in the world and an authoritative center of knowledge and research on Islam – continues to assert its ideological role in the region.

As the Congressional Research Service’s paper points out, “although it may not play the same type of leading political or military role in the Arab world as it has in the past, Egypt still has significant ‘soft power’”.

“We have the manpower, technical ability and dedication to recognize the harmful policies being advocated by these terrorist organizations,” says Mr. Shoukry.

“Their objectives are political and circumvent the will of the people of the region. This fragment of society is not cohesive with our history or culture.

In fact, Egypt has been a cultural leader in the region for the past two hundred years contributing to regional diversity, artistic milestones and religious tolerance.”

Egypt’s Prime Minister, Ibrahim Mahlab, emphasizes for his part that “Egypt is a very strategic partner to the USA. When you have had a long-standing strategic relationship as we have, you can withstand any challenges.”

Indeed, the events of recent months have shown that in spite of their recent hesitations, Washington and Cairo are back on the path of friendship and mutual cooperation.

It’s good news for the Middle East, and indeed for all of us.