Stable and strategic at the crossroads of Asia

Located at the heart of the Eurasian land mass, Tajikistan is ideally placed for promoting regional stability and economic growth 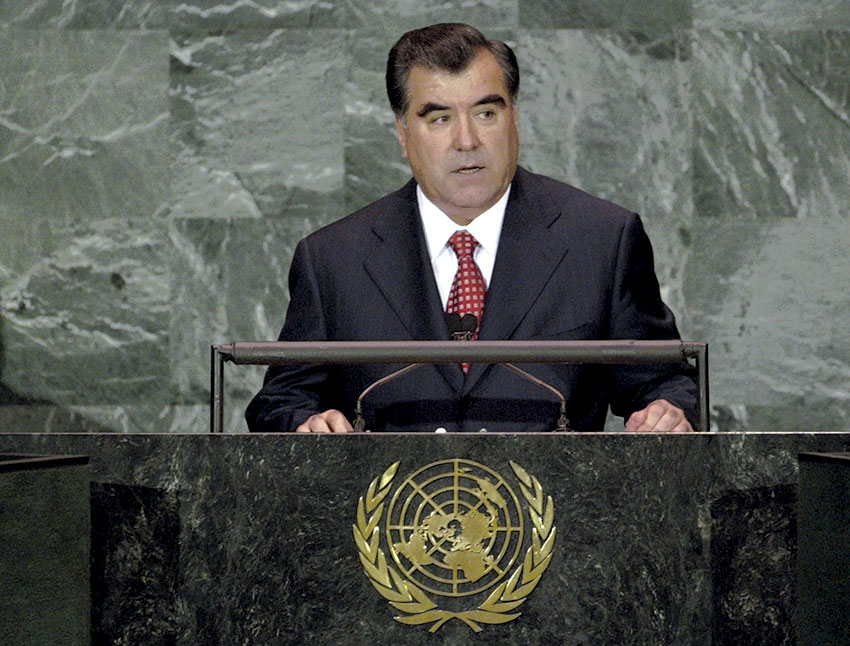 PRESIDENT EMOMALI RAHMON. PHOTO: PRESS SERVICE OF THE OFFICE OF THE PRESIDENT OF THE REPUBLIC OF TAJIKISTAN
SHARE

Following a civil war and successful struggle against terrorism during the 1990s, the Republic of Tajikistan has emerged with a consistently growing economy and an ever-improving standard of living. Despite upsets in the global economy, the country continues to develop, and as it does so, play an important role in stabilizing both Afghanistan and the wider region.

A crucial resource that the country is able to leverage on is water. It is in fact one of the most water-rich countries in the world and the source of more than half of the region’s fresh water supplies. As Tajikistan develops its hydroelectricity generation and transmission capacity, for both its own benefit and that of neighboring countries, it also plays a leading role on the global stage as a proponent of international water cooperation. These issues continue to become more important with the effects of climate change and the growth of the world’s population.

“We are working to strengthen security, continue our path of positive and progressive development, reform various sectors of economy, raise the standard of living, and drive the gradual transition leading to the growth of Tajikistan’s middle class” Emomali Rahmon, President of Tajikistan

In an exclusive interview with United World, the President of Tajikistan, Emomali Rahmon, discusses the country’s economy and its development over recent years, as well as water, energy and security issues affecting both Tajikistan and Central Asia as a whole.

How would you describe Tajikistan’s strategy for national development and what are the key economic achievements of recent years?
During the years following independence, Tajikistan passed through a difficult transition. However, thanks to the persistence and hard work of its people, the country has achieved significant results in establishing national security, promoting social stability, encouraging economic development, ensuring national unity, and raising the population’s standard of living.

Today our main task is to build on these achievements in order to ensure their continuity. We are working to strengthen security, continue our path of positive and progressive development, reform various sectors of economy, raise the standard of living, and drive the gradual transition leading to the growth of Tajikistan’s middle class.

Every year new jobs are created, infrastructure is improved, and schools and hospitals upgraded in Tajikistan. Critically, our government is making every effort to improve the population’s access to key utilities, including clean drinking water and uninterrupted power supply.

“Implementing necessary measures to improve the investment climate and allow private sector development has been a priority for our government. Thus we have made reforms to promote the development of entrepreneurship and the growth of the private sector. The World Bank has acknowledged this and rated Tajikistan as the most-improved country when it comes to ease of doing business, for 2014” Emomali Rahmon, President of Tajikistan

This has been done in accordance with the national development strategy concluding this year. Based on this, we are at the present moment finalizing a new 15-year national development plan as a framework for advancement until the year 2030. This will guide all aspects of the development of the Republic of Tajikistan at both national and local levels.

Our main focus for economic policy is to ensure the stable development of the national economy, based on three main strategic goals: breaking the communication deadlock, ensuring energy independence, and guaranteeing food security.

Thanks to the realization of economic reforms in the country, we have managed to increase the production level of industrial and agricultural outputs, raise the volume of investment, and achieve sustainable development of Tajikistan’s economy. If we look at 2013 we can see the results. Our country’s GDP growth was maintained at 7.4%, the population’s income increased by 16.5%, and the average monthly salary grew by 20%.

Despite global economic issues affecting both the international and domestic labor market, the country has created 870,000 new jobs over the past five years. In the near future we aim to create an additional 250,000 jobs.

We also have to face tough, competitive market conditions. To meet this challenge, we have attached great importance to the rehabilitation of a competitive and efficient national industry. This has necessitated the renewal of industrial enterprises in order to provide favorable conditions for manufacturing and entrepreneurship.

“Harnessing our substantial hydropower potential will ensure the free flow of water and energy between the countries of the region, and thus, thanks to further sustainable development of the region, solve a number of important socio-economic issues” Emomali Rahmon, President of Tajikistan

Today, the Republic of Tajikistan is making every effort to create a transport corridor in the region, which will grant us further access to South Asia through Afghanistan.

In this regard we are also making a contribution to the development of border areas with Afghanistan. During recent years, five bridges connecting Tajikistan to Afghanistan have been built. On the Tajik side of the border there are cross-border markets. These promote the development of settlements, located on both sides of the border, by offering opportunities for trade.

Implementing necessary measures to improve the investment climate and allow private sector development has been a priority for our government. Thus we have made reforms to promote the development of entrepreneurship and the growth of the private sector. The World Bank has acknowledged this and rated Tajikistan as the most-improved country when it comes to ease of doing business, for 2014.

We have given priority to the implementation of investment projects using modern technology that are export oriented and environmentally friendly.

Today, with the view to ensuring sustainable economic development, a number of free economic zones have been created in Tajikistan. They have been designed to give a powerful impetus to further development.

Realizing the necessity of international trade integration, on the March 2, 2013, Tajikistan officially became a member of the World Trade Organization (WTO). In this regard, we have made maximum efforts to ensure the competitiveness of our domestic economy, as well as to improve the investment climate and enter the global market.

What is Tajikistan’s approach to the overlapping issues of water, energy and security in Central Asia?

Central Asia, because of its geographical location and the influence of other countries, is subject to various types of risks. The most dangerous risks are not extremism and international terrorism, but pre-existing factors that can cause conflict, including water resources management, poor socio-economic development, and illegal drug trafficking.

The rational, regional use of water is fundamental based on the fact that the Central Asian states share common water supplies. This affects the energy situation directly because we have great untapped hydropower potential that can grow not only our economy, but also those of nearby countries including Afghanistan and Pakistan. Thus, achieving positive results in terms of water use will support energy growth and economic security, and in turn allow countries of the region to develop other sectors of vital importance.

Tajikistan itself does not have sufficient hydrocarbon energy reserves to grow its economy. Harnessing our substantial hydropower potential will ensure the free flow of water and energy between the countries of the region, and thus, thanks to further sustainable development of the region, solve a number of important socio-economic issues.

In this context it is vital to consider the situation in the region as a whole and in Tajikistan, particularly in the direct relationship between geopolitical influence and energy factors. Today energy resources are of great importance and ensuring efficient, reliable and safe energy supply meets the realities of the present time.

Thus the rational and effective use of water along with integrated water resources management in the region will lead to poverty reduction and an increase in irrigated land, as well as decrease security threats because of economic revival, develop the industrial base of the region, and promote investment due to low electricity prices.

As far as generation is concerned, an important recent achievement was a positive assessment from the World Bank regarding the construction of the Rogun hydropower plant. This hydroelectric facility is of great economic importance because, in addition to producing clean energy, it will allow us to begin the rehabilitation process of the country’s industry. As a matter of fact, Rogun will be a factor for integration and economic development of the whole region.

In line with sharing electricity with our neighbors, we are also working on a project to construct a power transmission line. This initiative, known as the Central Asia-South Asia-1000 project (CASA-1000) is a major development in the electricity market of Central and South Asia. CASA-1000 has been approved by the World Bank, and when completed will allow the export of electricity surplus during summer from Tajikistan and Kyrgyzstan to Afghanistan and Pakistan.
Due to such projects, in the near future the Republic of Tajikistan may well become a regional energy center. Combining significant hydropower potential, competent management, and effective foreign policy will lead us to a new stage of economic development. This will finally lead to a change of intra-regional relations and subsequent economic development across Central Asia.