Protecting the unique heritage of the land of eternity

Article - May 14, 2014
More than 5,000 years of history define the unique open and global mentality of the modern Bahraini society. PM Communications meets Sheikha Mai bint Mohammed Al Khalifa, Minister of Culture of Bahrain to unveil her vision for the cultural development of the kingdom 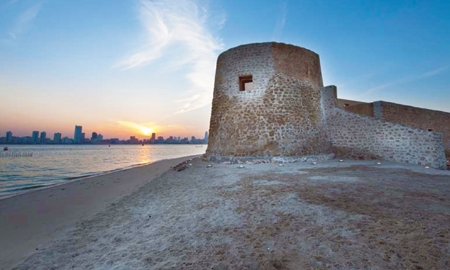 Bahrain was the first country to find oil deposits in the Gulf back in the 1930s, which sparked rapid economic development and modernisation. However, instead of depending on oil, Bahrain moved to diversify its economy quicker than its Gulf neighbours with much larger deposits. The result of this has been the creation of a modern and cosmopolitan Bahrain – a financial hub, an international centre of business, and the host of the Formula One Gulf Air Bahrain Grand Prix.
But there is so much more to this archipelago of 33 islands – known as the land of two seas and famed for its pearl diving traditions and the quality of its pearls. As a trade hub and the Gulf’s most important commercial crossroads for 5,000 years, it has a rich heritage that it is keen to preserve and a thriving art and cultural scene that it is eager to promote and develop.
In any country, preserving national heritage and cultural identity at a time of rapid modernisation and globalisation is not easy. But Bahrain’s Minister of Culture, Sheikha Mai bint Mohammed Al Khalifa, is the woman charged with this difficult task. Aside from this, she also wants to develop “cultural” and “not commercial” tourism and to make Bahrain a regional centre of Arab cultural preservation.
While commercial tourism can often lead to an erosion of culture and tradition, the minister wants the development of cultural tourism to be the main motivation behind developing a thriving arts and culture industry, preserving and enhancing ancient architecture, and preserving cultural heritage by displaying it in museums and other heritage centres.
“If you focus on the most important issues you can create a story to attract a lot of tourism that will add to Bahrain. I always believe in the creative industry. There is no need to build more shopping malls. Instead, we must benefit from what we have and automatically we will gain more. This is the most important mission for me and I am always proud of what we present in our museums,” says Minister Sheikha Mai bint Mohammed Al Khalifa.
“The artists in Bahrain are the best ambassadors for Bahrain. Wherever we go, we are very proud of our people, our artists and our ancient history as well. So what we want to do here at the Ministry of Culture is to focus on the most important sites and to have different museums designed by very famous architects.”
While she is eager to preserve tradition, the minister is a staunch believer that when it comes to cultural preservation – be it of a traditional dance or physical renovation of ancient architecture – it is imperative to mix the traditional with the modern.
The minister cites the evolution of the global Irish dancing phenomenon that was “riverdance”: “They used to be limited to traditional Irish dance, but when they invited the right people for the lighting and to develop an international level group it all changed. It was my dream to do the same with the traditional classic dance here in Bahrain. So we are in the process now. I hope by next spring I will be able to invite my Bahraini group to dance here in the national theatre with the right tools from people from all around the world to support them.
“It’s always mixed; it’s not only the traditional. You need to mix it with a very high level of expertise of many things, because it’s not only the song or not only the dance, it is also how to mix it. We will never be able to be international if we just stick with the traditional without adding some modern elements.”
National Fund for Culture and Heritage

Fortunately, the Minister of Culture is not alone in her fight to preserve and promote Bahrain’s heritage and culture.

An important signal of the government’s intent to support the country’s culture and heritage was made in February, when the Bahrain Cabinet approved a proposal for establishment of a fund to support Cultural and National Heritage.
The government wants the fund to be a partnership between the government and the private sector. It is hoped that the proposed fund will provide the necessary funding for the development of arts and literature, preserving the identity of Bahrain as well as highlighting the importance of the role of culture in bringing community members together through their participation in cultural activities.
So how important is culture’s role in bringing community members together in Bahrain, particularly after recent divisions that emerged as a result of the 2011 protests? The minister responds: “Culture means a lot for everybody. Culture is the only tool to bring people together. In 2011, our title for the Taa Shabab programme was ‘Restoration of the Hearts’. It is the only tool and our duty is to pass the right message to the next generations.”