The pearl of the Gulf

Article - May 14, 2014
From the Pearl Pathway and Fort of Bahrain to the new National Theatre 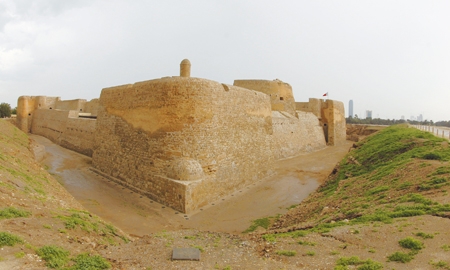 Long before the discovery of oil in the 1930s, Bahrain’s most important export was its pearls, which have been hailed as the best in the world. For centuries, pearl divers would reach the depths of the sweet water beneath the salty sea (which is believed to give Bahrain’s pearls their unique quality) in search of the precious commodity.

Visitors to the country will now be able to understand more about this longstanding Bahraini tradition, thanks to the opening of the Pearl Pathway in the coastal town of Muharraq. The pathway, incorporating 17 sites in all, will tell the story of “Pearling” and this unique story and its physical testimony in Muharraq is under consideration by UNESCO for a World Heritage listing.
One archaeological wonder that has already been given UNESCO’s prestigious World Heritage site status is Qal’at al-Bahrain, also known as the Fort of Bahrain. Located 6km from the capital Manama, the fort itself dates back to the 16th century, but the site is believed to have been once the centre of power for the ancient Dilmun civilisation from around 2300BC. Originally an Islamic fort, it was, in more recent times, occupied by the Portuguese.
From ancient architecture to modern: Bahrain’s National Theatre was designed by French company Architecture-Studio and opened in November 2012. This beautifully designed building includes a main 1,001-seat auditorium for drama, small symphony concerts, conferences, jazz and other amplified music events.
And it is in this theatre that the Manama: Asian Capital of Tourism 2014 celebrations will conclude in December with an everlasting message of joy with an extravaganza unlike any other, with artists from across the continent coming together to showcase their cultural heritage through music, song, and dance in one dazzling showcase.