Empowering the leaders of tomorrow

Article - October 24, 2013
The recent establishment of the Ministry of State for Youth Affairs puts the government's affirmed support of Kuwaiti youth into action 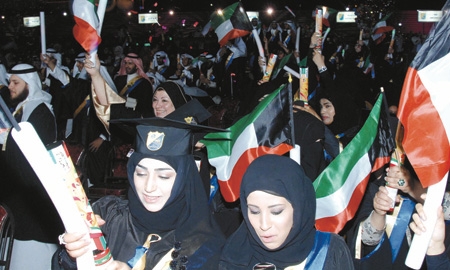 THE KUWAITI GOVERNMENT IS INVESTING HEAVILY IN ITS YOUTH, GIVING THEM THE RESOURCES TO GROW AND TRANSFORM THE NATION
SHARE

Kuwait is putting a lot of stock in its youth, who comprise over 60 per cent of the population. With nearly 20 per cent of public expenditure allocated to education, the Government is preparing the younger generation for a brighter, and more engaged, future in which Kuwaitis – especially through the private sector – will play a more influential role in national development.
Rana Al-Nibari, CEO of INJAZ Kuwait (a not-for-profit NGO that focuses on youth engagement), laments the fact that Kuwait has become a sort of welfare state where the Government provides easy, well-paid jobs.
“Today, the private sector is looking to attract people [in the public sector], however it is just not happening. I think there is a missing link and this is educating our young people,” she says. “In order to be able to diversify Kuwait’s economy, we are trying to encourage our young people to be entrepreneurial and be attracted by the private sector.”
Improving the education sector is only one part of the Government’s plan. As Dr Yousef Hamad Al-Ibrahim, Amiri Diwan Advisor, explains, Kuwait needs to “cultivate young people in the right way, by providing them with an extraordinary education system as well as extraordinary facilities to spend their leisure time and get them involved in social work and volunteering. They need to feel as if they are part and parcel of society.”
Acting on an idea put forth by HH Amir, the National Youth Project (NYP) was set up last year to actively encourage young people to get involved with the way their country is run, allowing them to participate in an advisory body tasked with helping to set official government policies.
By creating channels of communication with the current political leadership, the project has been helping develop new methods for youth contribution to national social issues, and in turn, nurturing the country’s leaders of the future.
More than just involvement, the NYP was an initiative run completely by young people, for young people. After the creation of a ‘Youth Council’ in 2012 – comprised of representatives aged between 18 and 25 from each the country’s NGOs, professional associations and societies – the NYP embarked on reaching out to Kuwaiti youth.
Under the motto of “Kuwait Listens”, online advertising on social media as well as TV adverts encouraged young Kuwaitis all over the country to pitch in with suggestions for their priority areas of action, including education, health reforms, the environment, national unity and sport, to name but a few.
“They determined ten priorities,” says Dr Al-Ibrahim. “Then the council started doing their R&D and meeting members of parliament and cabinet members, as well as the private sector, to come up with how they wished to change the priorities.”
Labelled as a “success on all fronts”, the NYP came to end in June, yet it certainly left a lasting legacy in the form of the Ministry of Youth Affairs, which was created in April thanks to popular, young demand.
With a budget of KD20 million (£44.3 million), the ministry has, according to the Ministry’s undersecretary Sheikha Al-Zain Al-Sabah, “a vision for a value-driven young population, and a fruitful and creative partner in the formative and sustainable development of the nation.”
In essence, the newly formed ministry is a vital liaison between the youth, other governmental institutions, civil society and private entities, that defends the interests of Kuwaiti youth.
“Youth empowerment is a constitutional principle in Kuwait. Above all, young people need to be heard and trusted. They also need to be the state partners in planning their future through Kuwait’s future,” explains Sheikh Salman Sabah Salem Al-Hmoud Al-Sabah, who heads both the Ministry of Information and the Ministry of Youth Affairs. “The Ministry has the privilege of orchestrating all the youth initiatives in the public and private sectors. This role will allow us to define the real problems the youth face at all levels.”
So, despite a cushy public sector, Kuwait’s well-known spirit of pioneering, risk-taking and creativity remains alive in the youth of today.
In addition to the aforementioned initiatives and entities, INJAZ, present in Kuwait since 2005, is also actively motivating Kuwaiti youth to fulfil their potential by providing guidance and hands-on entrepreneurial programmes.
“We exist in order to empower young people to have their own economic success. In doing so, we engage with the private sector to take an active role in driving the leaders of tomorrow, to develop themselves based on three pillars: entrepreneurship, work readiness and financial literacy,” says Ms Al-Nibari.
Furthermore, such was the success of the NYP and the Youth Council that the Government recently announced the creation of a permanent National Youth Council. The NYC will be democratically elected every year to come up with new ideas and different priority areas aimed at benefiting and fostering today’s youth, providing themselves, and their country, with greater opportunities for the future.