Article - October 24, 2013
Distinguished in the region by its relatively progressive nature, Kuwait's blend of heritage with modernity holds great appeal to those seeking something different 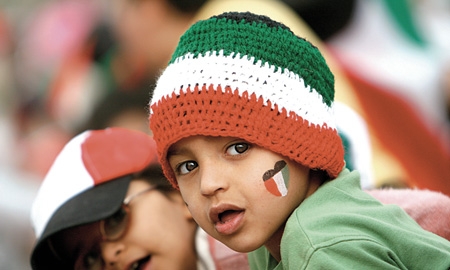 Kuwaitis are justifiably proud of their reputation as having the most advanced democracy in the Gulf region. The emirate is one of only two Gulf Cooperation Council (GCC) states, the other being Bahrain, with an elected parliament, which in 2009 welcomed its first four female MPs, heralding milestone elections for the politically and socially conservative societies of the Gulf. The event demonstrated the country’s openness and willingness to embrace progressive change, which many say are typical of the traits that set Kuwait apart from its neighbours.
Kuwait has a close-knit society yet with an international outlook. Against a backdrop of ensuring global business standards and establishing a modern environment for 21st century enterprise and initiative to prosper, it strives to preserve its deeply rooted sense of family, culture and tradition.

Dewaniyas for example have existed for centuries and the term refers to both a reception hall and the social, political and business gatherings held in it by Kuwaiti men, and remain an essential part of Kuwaiti life. “We run our operations to international standards, but we do business the Kuwaiti way, based on trust and treating your people in the right way, making them part of the family,” comments Marzouk Al-Kharafi, Chairman of Kuwait’s Americana Group.
By embracing modernity yet being true to its heritage, Kuwait hopes to maintain its authenticity and uniqueness. So, what exactly makes Kuwait ‘authentic’? The common thread from political and business leaders’ responses is the Kuwaitis themselves. “We are pioneers in terms of freedom, politics, elections, parliaments and many things,” says Barrak Al-Sheetan, Chairman of the National Offset Company.
Majed Eisa Al-Ajeel, Chairman of Burgan Bank, believes the diversity of Kuwaitis’ backgrounds add to the emirate’s individuality. “In addition, the political system and the openness of the country and the deep-rooted democracy. Someone once said that we have been having Arab springs in Kuwait for the past 50 years, since we had the constitution. It is an open society with open debate. We have had the parliament and free elections for over half a century. Everybody can voice his or her own opinions. I think this is what differentiates Kuwait from other places.”
“Kuwait is definitely unique,” agrees Abdulaziz Fakrhoo, GM and CEO of telecom frontrunner Wataniya. “Authenticity is part of the uniqueness of Kuwait. For example, Kuwaiti people keep their traditions, but also open up their minds to what is happening outside. They do not mind getting the latest fashions, but with a Kuwaiti spice. Secondly, there is a sense of liberty embedded in every individual.”

Kuwaitis are renowned as shrewd negotiators. The nation’s deep-rooted trading traditions earned its merchants a reputation for business astuteness and business acumen that are respected and in demand overseas. “Kuwaitis are adventurous and because of this you will see them almost everywhere,” comments Abdulwahab Al-Wazzan, Second Vice-Chairman of the Kuwait Chamber of Commerce and Industry (KCCI). “If you go to other countries in the region, they want to do business with Kuwaitis.

That kind of confidence and trust has been built over the years. That makes Kuwaitis different.”
Politically as well as commercially, the emirate’s adeptness at diplomacy and negotiation has carried it on a relatively peaceful course in a volatile region of the world. “Kuwaitis have survived in a very hostile environment, in a very difficult neighbourhood. In spite of all that, we have maintained stability in a society where there could have been a great deal of clashes,” says Abdulatif Al-Hamad, Chairman of the Arab Fund for Economic and Social Development (AFAES), a Kuwait-based finance institution that seeks to meet the development needs of member countries and pushes Arab cooperation and economic integration.
“Kuwaitis are used to travelling extensively and so they have been exposed to different cultures and nationalities. This means that our people are very open, and we can see that even with the previous generation – they are very progressive and welcoming,” says Rana Al-Nibari, CEO of INJAZ, a non-governmental organisation that uses strategic partnerships between Kuwait's private sector and educators to devise training programmes that develop business and leadership skills. “Kuwaitis are very entrepreneurial, very smart. They can do a lot of things and they can compete in the best of markets,” adds Gatehouse Bank’s Chairman, Fahed Faisal Boodai.
Mrs Al-Nibari goes on to highlight the regionally atypical attitudes to women in the emirate. “Women in Kuwait do play a very crucial role,” she says. “This is very different to the rest of the Middle East. We are the pioneers in that regard. This is also because of our history – men used to go on their trips for long periods, and the women used to manage the country. Stories like this are what make Kuwait different.
“Kuwait has always been a leader in the region in terms of ideas and entrepreneurship. It was one of the first countries in the region to really drive education institutionalisation, and many of those best practices have been adopted by the rest of the Gulf Cooperation Council (GCC).”
Kuwait is the UK's third largest trading partner in the GCC region, with the long-established bilateral trading relationship growing stronger following a joint pledge by both countries in 2011 to double bilateral trade to £4 billion per year by 2015.

In addition, UK companies, large and small, are well positioned to participate in the Kuwaiti Government’s ongoing drive to expand the emirate’s private sector, boost its infrastructure and edge towards increased privatisation. In 2010 it devised a five-year development plan that includes some 1,100 projects – some of more ambitious of which are hailed ‘mega-projects’ – with an estimated KD37 billion (£81 billion) of spending focused on both oil and non-oil sectors.
Examples of some of the mega-projects include a new business hub, called Silk city, a major container harbour and 15-mile causeway, railway and metro systems, health and education upgrades, and around KD25 billion of oil-sector investments to raise production capacity and modernise current facilities.
“The National Development Plan was put in place not only to increase living standards, but also to diversify the Kuwait economy and increase the number of PPPs (public-private partnerships),” says Sheikh Mohammad Al-Abdullah Al-Mubarak Al-Sabah, Minister of Cabinet Affairs and Minister of Health. “We hope that by attracting foreign companies to come and work here, they will take on bright, young Kuwaitis. The Western work ethic will be implanted upon the national psyche.”
“We are seeking long-term partnerships, which ensure proper training of our young workforce and the transfer of know-how and technology. This requires the right environment and this is what we are working on creating,” adds Anas Khaled Al-Saleh, Minister of Commerce and Industry. “We are working hard to develop the right legal and commercial environment that will ensure that Kuwait is at the top of the list of countries people want to invest in.”