A game-changing 186 billion tonnes of coal

Article - April 30, 2014
The country ranks seventh in the world in coal reserves, most of which lie beneath the Thar Desert. Harnessing the resource will reconfigure Pakistan’s energy matrix 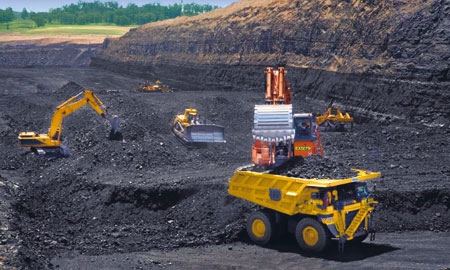 The Islamic Republic of Pakistan is a country rich in energy and natural resources. The country holds the potential to become a global leader in the mining sector and the coal industry. Nevertheless, its economy remains at a developing stage. Accordingly, foreign technology experts and mining companies could enjoy greater opportunities and investments here.

His Excellency Shahid Khagan Abbasi, Pakistan’s Minister of Petroleum and Natural Resources, speaking about the nation’s current economic climate and the future of its domestic mining sector, says: “The Pakistani economy is fairly small today by global standards. So there’s a lot of room to grow.”

Meanwhile, the nation’s huge reserves of gold, copper and coal – especially from the Thar coalfield in the Thar Desert – would mean that an influx of foreign expertise is more essential to develop into a more sustainable economy.

“Thar coal is one of the largest coal reserves in the world, but it has some technical issues with mining. It needs heavy investment. The same with the copper and gold reserves,” says the minister. “Right now, the potential and estimates are there, but we have to look at how much is technically and commercially exploitable.”

However, Pakistan offers more favourable business conditions for global coal operators, while the United States and the United Kingdom have shifted away from coal energy.

“Subsequently, as we develop our Thar coal reserves, we will go into domestic coal fire plants as well,” says Mr Khaqan Abbasi. “That will further reduce the cost of the energy mix.”

Yet despite holding such large swathes of coal reserves, the National Electric Power Regulatory Authority (NEPRA), which is based in Islamabad and responsible for regulating Pakistan’s electricity, disclosed that the country had only generated 0.1 per cent of its power from coal as of 2010. This compares to 80 per cent for Australia, 50 per cent for the US and 30 per cent for the UK for the same year.

Recently, Pakistan has embarked on building much larger coal power plants with a target of generating 6,600MW of electricity. This shift in the energy mix would significantly reduce power production costs; currently, many power plants run on imported furnace oil, which is twice as dear as coal and 50 per cent more expensive than LNG. In turn, savings on oil imports would also reverse the foreign exchange reserves crisis.

With the Thar coalfield’s deposits ranking as the sixth largest coal reserves in the world, coal could be a real game changer for Pakistan and a lynchpin in the government’s counterattack on the energy crisis.

Because a recent constitutional amendment puts all natural resources, aside from oil and gas, under provincial governments’ authority, Mr Khaqan Abbasi recommends that foreign investors should better understand the local governments, customs and regulations of the provinces that they are interested in, which may be more time-consuming, but worth the effort.

For instance, Balochistan province provides significant copper and gold reserves, and such deposits have already translated into 300,000 ounces of gold extracted per year, along with 350,000 ounces of copper a year.

Additionally, the minister wants to emphasise that Islamabad is sincere about promoting a ‘pro-business’ atmosphere for foreign investors in the domestic mining sector.

“You will also find that the government is on your side, so the investments are safe. This is not the case in many other countries,” he says. “Investors find that when they come up against a local issue, their investment is not safe in other countries. We freely allow repatriation of profits and capital.”