Article - December 18, 2013
This southeastern province is where the UNESCO shortlisted Dinder National Park is situated, and at some 4,000 square metres, it is one of the largest nature reserves in Africa 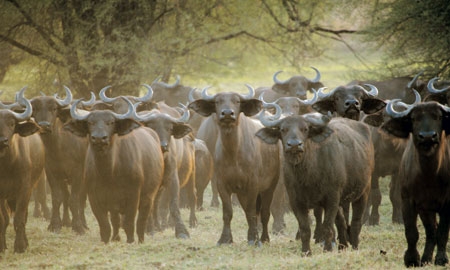 As with the many other of Sudan’s 18 “wilayah” (the Arabic word for “states”) Sennar is renowned for its agricultural productivity; particularly for the great number of farmers who grow tropical fruits such as bananas and mangos on the banks of the Blue Nile each year.
Then what is it, you may ask, which sets this state apart from the rest?
It is the fact that Sennar (sometimes known as just “Senna”) is the proud home to one of the continent’s largest national parks and biosphere reserves, and a place that holds presence on UNESCO’s tentative list for potential ‘World Heritage’ status.
Founded in 1935, Dinder National Park lies approximately 400km southeast of Khartoum on either side of the Dinder and Rahad rivers and the Sudanese border with Ethiopia; and it is a result of this distinct location which makes the area so ecologically significant.
Falling on the ecotone between the Sahel Region (semi-arid) and the Ethiopian Highlands (montane woodland), the park contains three different ecosystems which allows it to play habitat to 27 large mammal species including lions, leopards, buffalo, elephants, giraffes and rhinoceroses.
What’s more, over 160 species of birds can be found (it is in a major flyway used by birds migrating between Eurasia and Africa), as well as 32 fish species and a good number of reptiles and amphibians.
Indeed, it is thanks to such rich biodiversity that this park was designated a member of the World Network of Biosphere Reserves in 1979. Biosphere reserves are sites recognised under UNESCO’s Man and the Biosphere (MAB) Programme to promote sustainable development based on local community efforts and sound science.
As a place that seeks to reconcile conservation of biological and cultural diversity and economic and social development through partnerships between people and nature, Dinder fits the bill perfectly.
Although the park is fairly remote (as you would expect a protected area to be), experiencing these beautiful and unspoilt natural surroundings for yourself is certainly possible. The best way to visit Dinder is via the capital, where you can arrange to have a four-wheel-drive (a very necessary mode of transport for the park’s dirt tracks) to collect you from your hotel.
The dry season in this part of the world runs from December to May and is the recommended time for visiting the park. From June to October, on the other hand, travel should be avoided as the tracks can become heavily flooded.
Meanwhile, upon arrival at Dinder, there are rooms for rent and places to eat as well as a museum to explore. And while the concept of tourism is only just finding its roots here with sightseeing services and development remaining at their most basic, such a scenario offers you the very rare opportunity where, unlike most game reserves in Africa, you can truly see game in its natural state, without the presence of hundreds of other tourists.
This opportunity won’t last forever, however, so it’s advised to get to this wonderful and little known gem before hoards of other curious adventure-seeking travellers do!