The pioneering, private sector- led marine megaproject, Sabah Al-Ahmad Sea City, has transformed a vast area of salt marsh into an incredible waterfront development that will host over 150,000 people. This development has been made a reality by the vision of Khalid Yousef Al-Marzouq, the determination and drive of his son Fawaz Khalid Al- Marzouq and the support of Kuwait’s head of state, HH Amir Sabah Al-Ahmad Al-Jaber Al-Sabah. 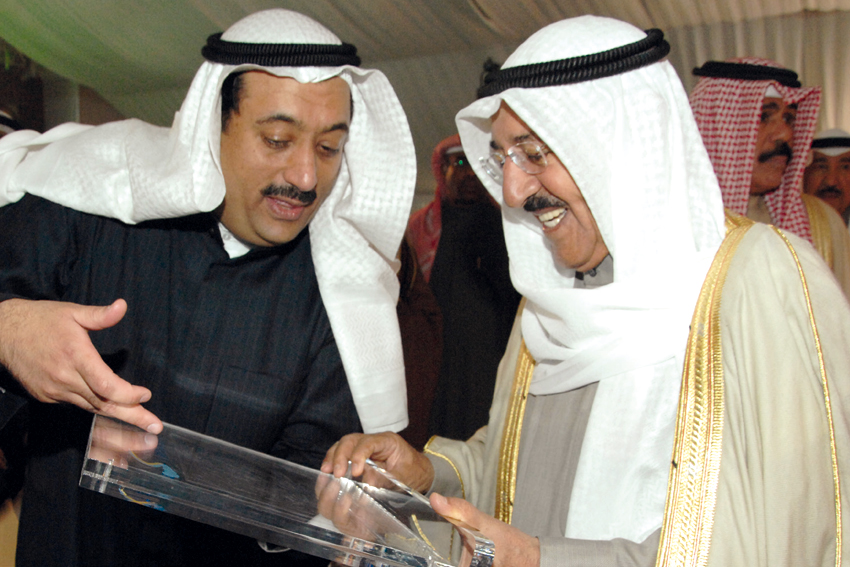 From desert wasteland to waterfront luxury

An ambitious, one of a kind real estate megaproject has taken shape in the deserts of southern Kuwait that has to be seen to be believed. Named in honor of Kuwait’s head of state, the Sabah Al-Ahmad Sea City has surpassed any single residential development in the country’s history, both in terms of scale and technical complexity. To put it in perspective, an inland area the size of Manhattan Island is being transformed into a thriving, seaside community.

This has been done through an incredible feat of engineering whereby a vast network of waterways from the Arabian Gulf has been constructed that now reaches more than five and a half miles inland. The influx of seawater has turned a swathe of environmentally impoverished hypersaline salt marsh into a city-sized, waterfront of azure sea and white sand. Once completed, Sea City’s world class beaches and luxury waterfront properties will host over a staggering 150,000 residents. The vast majority of these will have waterfront properties along the banks of a clean, pristine, newly created shoreline.

“By the time we finish we will have doubled the sandy shoreline of Kuwait. Over 200km (125 miles) is being created and the water is very swimmable. The water quality inside the lagoon system is identical to that of the open water,” explains Fawaz Khalid Al-Marzouq, CEO and Chairman of La’ala Al-Kuwait Real Estate Co. (La’ala Real Estate).

This company has grown in leaps and bounds during the course of the project, especially in terms of technical expertise. The unique nature of Sea City has seen them design new operational methods for everything from bespoke methods for dynamically compacting soils to mass production of concrete floating pontoons.

In fact, completed phases have established world-class marinas for mooring yachts and sailing vessels, a favorite pastime of Kuwaitis reflected in national symbols and history. As Mr. Al-Marzouq told Globus Vision, “We have four marinas here and the smallest is already the largest in Kuwait. We have 2,710 marine berths with the ability to accommodate craft up to 132 feet in length. Historically the lack of marina berths has stifled boat sales. We have solved that problem for the foreseeable future.”

More technically advanced than artificial peninsulas created in neighboring countries, Sea City has brought the ocean to the desert, rather than backfilling millions of tons of material into the sea. The difference is one of environmental sustainability, as issues caused by rising sea levels are mitigated. Furthermore, formerly unusable low laying wasteland has now been added to the pool of available residential property in a country fighting to meet housing demand.

However, the fact that Sea City is a completely greenfield project means that it is disconnected from any nearby settlements. This necessitates the establishment of completely new infrastructure needed to support the community. Looking at the massive, nationwide demand for housing, La’ala Real Estate has laid the foundations for 100% habitation in the coming years, and has already seen a rapidly growing level of occupation use as the development springs to life.

“Whilst Sea City properties will predominantly be used as second homes initially, there will be a migration towards primary homes use as well. This said, we planned the infrastructure to handle full occupation. This means that sewage treatment, roads, electricity and water have all been built with a scenario that 150,000 people will be occupying the city. With phased construction we already have peak occupancy in excess of 10,000 people.”

Sea City is rapidly coming online and demand has been strong, for a good reason. As Mr. Al-Marzouq points out, “This is the only place you can buy freehold, beachfront property in Kuwait, so it has been very popular.”

One aspect of Sea City that has garnered positive reactions is the strong focus of La’ala Real Estate on nurturing and protecting the newly flourishing ecosystem that has sprung up within the development. A diverse array of marine life has migrated into this extensive new habitat.

Scientists were part of the project from its inception and have not only monitored and catalogued the colonization of new waterways by indigenous wildlife but assisted in the masterplanning to ensure ecological success. Approximately 1,500 species of fish, crustaceans, birds and other marine life have made the waterways and shores of Sea City their home. Stands of mangrove trees and a wide variety of salt tolerant plants have been planted along the banks of Sea City to both stabilize the shore and provide habitat to the teeming ecosystem. New species have even been discovered and named by the scientific community.

In effect, this amounts to a re-greening of the desert, a dream held dear by both Kuwaitis and other people of the Gulf. The success of La’ala Real Estate in bringing water into an environmentally impoverished land to create a new ecosystem has garnered regional and international attention. This is particularly the case given the detrimental effect of climate change and subsequent water stress on the Middle East.

“Scientists and Academics have lauded the unique techniques and approaches utilized on the project and numerous references to its positive impact have been published in papers and international publications,” adds Mr. Al-Marzouq.

Sea City’s management is proud to have implemented such a paradigm-changing approach. It is the hope of Mr. Al-Marzouq that this will be imparted onto Sea City’s residents.

“Once the land is taken over the Kuwaitis will start to build their own villas. Already many of them have embraced the sort of philosophy of the project, which is harmony with the environment, and we hope they pass this philosophy onto their children”.

A vision realized despite adversity

It was Mr. Al-Marzouq’s father, Khalid Yousef Al-Marzouq, who in 1986 first envisioned constructing sea cities more than 30 years ago.

Khalid Yousef Al-Marzouq was an entrepreneur and a developer who was well-known for predicting future trends in urban development well before they occurred. Following Kuwait’s oil boom in the 1950s he understood that infrastructure development in the sparsely populated desert country would have to be prioritized to keep pace with both economic and population growth.

As his son recalls, “He was a true visionary, many of his projects in the 60s were very progressive, even multilevel car parking or apartments, which faced some resistance. But he always stood by his convictions and said this is necessary. Now you can’t think of Kuwait without them.”

Sea City was one such idea ahead of its time. The project was initially approved on December 2, 1988. At this time Kuwait’s head of state, HH Sabah Al-Ahmad, was Deputy Prime Minister and Minister of Foreign Affairs. He enthusiastically championed the idea and early preparations were made with his support. However, Saddam Hussein’s invasion of Kuwait in 1990 threw the country’s development plans into chaos.

During this time Khalid Yousef Al-Marzouq was the only civilian member of the Kuwaiti government in exile, formed in Saudi Arabia. From there they launched extensive political and diplomatic activities directed towards both neighboring states and allies to ensure that the Kuwaiti cause would not be forgotten. Khalid Yousef Al-Marzouq made use of his media holdings to arrange for Al-Anbaa newspaper to be published in Cairo. It was from here that the voice of free Kuwait was disseminated. Furthermore he used his other Egyptian holdings to shelter Kuwait refugees.

Following the liberation, as life returned to normal in Kuwait, the Sea City dream again resurfaced. On November 23rd, 1993, initial approval was gained and feasibility studies costing in excess of $22 million were initiated. Finally, after a long journey to garner investment and resources, project construction commenced in December 2002.

At the official opening ceremony, on December 17th 2009, HH Sabah Al-Ahmad commended Khalid Yousef Al-Marzouq and his sons. “We congratulate all the people involved in this project at this moment of glory, marking the fruition of years of perseverance and toil, led by my brother, Khalid Al-Marzouq and his son, Fawaz, along with his brothers supported by multitudes of dedicated workers, partners and contractors,” he said. “They have shown us what the private sector is capable of, and we wish the private sector continues in the way of this project.” Sea City remains Khalid Yousef Al-Marzouq’s and his son Fawaz Khalid Al-Marzouq’s legacy for Kuwait, as does his example of the power of private sector achievement in an area traditionally dominated by state-led development. The project has demonstrated what the private sector can do when empowered by political leaders with vision. It was the first megaproject of its type and has set the scene, proving that it can be done and it can be sustainable.

Furthermore, it highlights how much technical know-how can be accrued by Kuwaiti companies during the life of a megaproject. Looking back Mr. Al-Marzouq, smiles recalling, “When La’ala Real Estate began this project it didn’t own a shovel! We are now one of the biggest construction and development companies in the region. We are now probably the largest marina construction company outside the US or Australia. We turnover in the region of 30 pontoons per week, which is a huge production volume.”

Given the youth demographic of Kuwait, where the median age is 24, as well as the high population density of Kuwait City, similar mega projects are urgently needed to house families. Sea City demonstrates that the private sector is a viable solution for solving this problem. Furthermore it can be done in harmony with nature, guaranteeing a greener future while also enhancing the technical capabilities of the national workforc