Foreign relations from friendships to partnerships

Article - April 29, 2014
For the last several decades, Pakistan has been used as a pawn in the game of global powers owing to its geographical situation. Now, the democracy is finding its feet, eager to show the world its potential as a political and trade equal 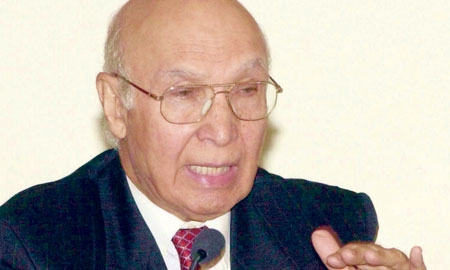 ‘Reset’ is the buzzword often whispered in the corridors of international diplomacy when relations between countries have nowhere to go but up. Yet even when there is a mutual willingness to take that route, timing is of the essence, knowing exactly the right moment to hit the button. For senior Pakistan government officials like Sartaj Aziz, the time may be approaching for constructive re-engagement with the United States, India and whoever ends up in control of Afghanistan, because the will to make it happen definitely exists.

“Pakistan has been paying an unfairly high price for being the place where too many global fault lines converge,” argues Mr Aziz, Adviser on Foreign and National Security Affairs to Prime Minister Nawaz Sharif. “Before 9/11, we did not have bombs or suicide attacks. But when the Americans invaded Afghanistan, they pushed all the people they had trained, armed and funded to fight the Russians over here so they became a threat to us. It is a very serious issue.”

There is no use pretending that Pakistan’s ties to the United States were not seriously frayed over Afghanistan, the Osama bin Laden incident and other security issues. Nor have successive administrations in Washington learned to live with the fact that Pakistan became the world’s first Muslim nuclear power in 1998, reserving the right to carry out a thermonuclear first strike if ever its territory were invaded. For their part, Pakistani authorities are very unhappy about the continuing US drone attacks on its sovereign territory targeting alleged terrorists.

“The point is, have those drones reduced extremism?” asks Mr Aziz. “No. They will only escalate it. That is why we are telling the Americans they must please try to understand that we also want to tackle the issue of extremism, but you cannot start killing your own people and then think that you will eliminate the problem forever.”

Another point of contention is Pakistan’s feeling that it has been made to suffer unfairly because the US-led sanctions against Iran have put a decades-old chokehold on its access to energy – a permanent energy shortfall being the most acute problem and brake on development the country has to deal with at the present time.

But the harsh rhetoric is being turned down by Washington and Islamabad pending what may prove to be game-changing developments in Afghanistan following the scheduled withdrawal of US troops in 2014. “The question,” says Mr Aziz, “is what will happen to Afghanistan now. The same thing as when the Russians left – another civil war?

“That is where we are now. Pakistan is trying to create some kind of reconciliation amongst the different groups, without interfering, of course. We hope these efforts will succeed, and Afghanistan will not slide into civil war again. People have suffered for 35 years, over a million have been killed, and 5 million have left the country. We still have three million refugees in Pakistan. If a civil war starts, we could receive more refugees, but I think it is a very serious problem.”

“Afghanistan may be a threat to the West in a distant way because it is far away, but to us it is a regular threat – every day, every week. Our security in terms of population and size is in a way more important, and I think the US is beginning to realise that it needs to build a relationship with Pakistan.”

Pakistan’s place in the global community

It need hardly be said that Pakistan’s foreign policy consists of rather more than a series of ad hoc responses to the United States and the complications of Afghanistan. Enhancing solidarity with the world Islamic community is one priority, as is growing its relationship with the European Union, which recently admitted Pakistan to its GSP Plus system of preferential import tariffs.

As Mr Aziz sees it, “Our foreign policy is based on four priorities: First, build a peaceful and prosperous neighbourhood. Secondly, reach out to regional and international partners. Thirdly, focus on ‘trade, not aid’. And lastly, develop a consensus-based approach to counter terrorism.”

Regarding the first of those policy points, Mr Sharif has made it clear that he wants to see major improvements in Pakistan’s historically fraught relations with India, putting an end to decades of mutual coolness, outright hostility and four wars. During an encounter last September with his Indian counterpart, Manmohan Singh – the first face-to-face meeting between heads of government since 1999 – the Pakistani PM ruefully noted that “We’ve been spending this precious money; resources we have, which should have ordinarily been spent on social sectors, have been diverted to buy the F-16s, to buying frigates, tanks, expensive submarines” and suggested that it was time for both governments to rethink their priorities.

The goal, added Mr Sharif, is to create the climate of trust and mutual respect that will allow bilateral trade to grow by several multiples from the current $2.35 billion. India represents a huge potential market for Pakistani goods, and new road and rail links between the two countries are stipulated in the South Asian Free Trade Area Agreement (SAFTA), which both nations ratified in 2009.

It was no accident that immediately after his return to office, Mr Sharif’s first trip abroad was to Beijing, where he signed new framework documents aimed at facilitating additional Chinese investment in Pakistan. Trade between the two nations topped out at $12 billion last year and China was awarded the contract it had long been seeking to operate the port at Gwadar, in Balochistan province. Road, rail and transport infrastructure have also been targeted by Beijing for major investment flows; and how should it be otherwise, given that Chinese exports would be the first to benefit from a direct route to the sea.

There is more to back up these initiatives than just optimism, Mr Aziz insists. “Think of Pakistan as a gateway with three portals leading to central, western and southern Asia. Central Asia and West Asia have an energy surplus, and South Asia is energy deficient, so if Afghanistan becomes peaceful again, gas and electricity can flow from there. All those regions need imports, and South Asia has a surplus in engineering technology that could be put to good use in either of the other two.”

Mr Aziz recalls that within a week of taking the reins of government, Prime Minister Sharif had a letter circulating among senior civil servants and diplomatic personnel in which he said “our focus from now on is economic diplomacy, which means the promotion of trade and investment.

“This has led us to introduce a number of mechanisms where we receive reports from the commerce ministry, the finance ministry and the investment promotion and export promotion bureaus to coordinate efforts at the country level. Right now with the recession, demand for exports is not high, so we are focusing on Asia, the Far East and of course China. We are also encouraging Middle Eastern investors to come.”

Second only to China as Pakistan’s heavyweight trading partner is the EU, and a large percentage of that commerce is through Britain, which shares a colonial past and numerous institutional similarities with Pakistan. Last year, David Cameron hosted a series of off-the-record encounters in London between Mr Sharif and Afghan President Hamid Karzai in October centred on prospects for getting the Afghani Taliban to take part in peace talks. Britain and Pakistan also hold a “regular strategic dialogue once or twice a year for exchanging views on security issues, where we learn from each other,” says Mr Aziz.

To his way of thinking, foreign direct investment is not a panacea for Pakistan’s problems but it can certainly open a shortcut on the way to a solution for investment hungry sectors such as power generation. In conclusion, says Mr Aziz: “Pakistan requires international support in realising its objective of an economic revival, which is vital for Pakistan’s socioeconomic development as a response to the ongoing militancy. The country’s foreign policy is being reoriented accordingly.”