A company established to build a nation

Article - May 21, 2014
‘The UK government and companies should think of investing in Pakistan or invest with me and I will in return protect their interests,’ says SK Group president and CEO Sardar Khan Niazi 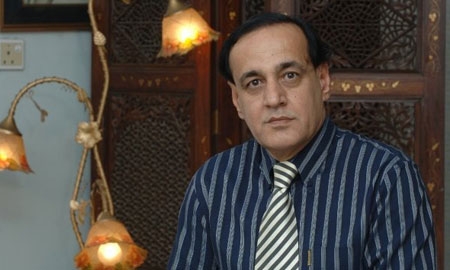 Media mogul, journalist, editor, anchorman, property developer, philanthropist and president of one of the largest conglomerates in Pakistan, Sardar Khan Niazi has put himself at the heart of nation building in Pakistan for three decades.
He is president and CEO of the SK Group, which is comprised of several companies in the areas of information technology, CNG (compressed natural gas) fuelling stations, media, construction and real estate. Despite operating in various sectors, all of the companies under SK share the same set of five core values: integrity, adaptability, excellence, unity and responsibility. These values, which have been part of the SK Group's beliefs and convictions from its earliest days, continue to guide and drive the business decisions of the group.
“SK Group was established by my father. Like me, he was also an agriculturalist and chief executive of the company. After completing my secondary education, I studied economics and journalism. I then took the responsibility of looking after SK Group after my father passed away,” says Sardar Khan Niazi.
One of the first companies to be formed by his father as part of the group was GASCO 2000 in 1996, a time when the Pakistani government was heavily promoting to motorists the use of CNG as a cheap and clean alternative to imported petroleum. Nowadays 80% of all cars in Pakistan run on compressed natural gas, using CNG conversion kits. “Our company is one of the pioneers of CNG in Pakistan,” says Mr Khan Niazi.  “I was the one who brought CompAir compressors from the UK and installed them in gas stations in Pakistan. I have installed as many as sixty compressors from the CompAir company.”
It is in the CNG sector that the businessman would most like to see more collaboration with UK with investors and the government. Like most owners of CNG stations, SK has been struggling as a result of gas and electricity shortages, that has forced most stations to close for up to hours, or even days, at a time.
“We have many problems in the CNG sector. The problem lies with the lack of gas exploration, which is a very slow process.

There is sufficient gas within Pakistan but due to the lack of exploration, this sector does not flourish,” the SK president explains.
“I want to collaborate with the British government specifically because they are the best in this field of work. Even a partnership or a means of improvement is welcome from them. I’ve worked five or six years in UK. My conclusion is that Pakistan and UK should cooperate with each other particularly in energy sector and CNG sector to ensure positive results if they do business together. Cash flow comes first. If we have a cooperative and collaborative partnership with the British government, this sector has a lot of potential.  Pakistan has a lot of potential.”
While the SK Group currently struggles within the CNG sector, the same fortunately cannot be said for its businesses in the media, construction and real estate segments.
Founded by SK in 2001, SRN media operates some of the country’s biggest newspapers including Daily Pakistan, The Patriot, and Pak Watan.

The group has also launched its first TV channel. According to its founder, the Roze TV channel is now one of one of the top four in the country after Geo, Dunya and Express. Mr Khan Niazi is himself an anchorman on one of the popular news shows on Roze TV. He is also chief editor of the Daily Pakistan, The Patriot, Pak Watan, Nawa-e-Nawabshah, and the monthly magazine Naya Rukh.

As a journalist and columnist, he has written articles on issues of national of interest, for which he has received many awards. He is a holder of the ‘Tamgha-i-Imtiaz’ award for his services to journalism and has received a gold medal for his reporting on nuclear blasts.

This is on top of the many other national awards he has received for his work in the business world, including ‘Best Businessman’ from the Rawalpindi Chamber of Commerce.
From media mogul and journalist to property developer: Sardar Khan Niazi’s SK Group has also been behind large scale projects in Dubai, as well as the Rose Shopping Mall, Paradise City, and the Chung Pa Hotel in his native Pakistan. “I have also done a lot of construction in the UK. I was the owner of around six flats on the main Harley Street, one of the most expensive places in London close to Oxford Street,” he adds.
The billionaire has not been one to neglect the poor and needy of his homeland and has used his fortune and success to invest in many social projects. Through his philanthropic organisation, SKN Trust, he has built schools and hospitals, particularly in poorer rural areas. “Our trust has given a lot for the welfare of Pakistan,” he says. The trust also established the first ever dialysis centre in Pakistan in 1997 and has given financial help to victims of natural disasters.