Round 1 oil-block sell-offs will attract $7 billion

Global petroleum markets may seemingly be in deep trouble with oil prices at their lowest in decades, but the dire situation is not dampening interest in Phase 4 of the Round 1 bidding contest for exploration and drilling contracts in the Gulf of Mexico 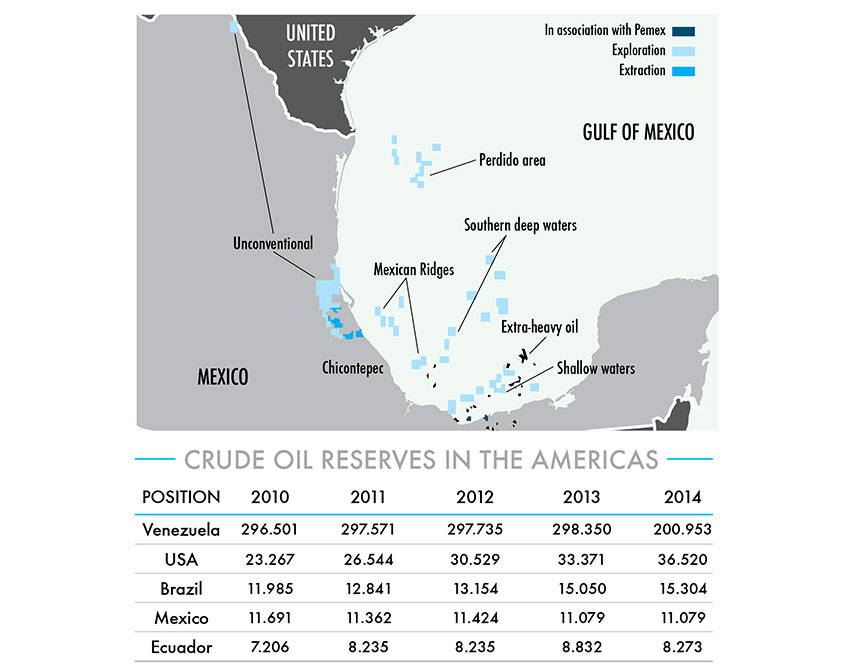 With 10 deep-water blocks going for auction early in December 2016 in the first round, the fourth phase of Mexico’s oil exploration and drilling bidding contest, Mexican officials are trumpeting the fact that major oil multinationals are showing interest despite the industry’s doldrums.

“Right now, the Gulf of Mexico is the one region in the world where there is so much intense exploration activity going on,” Juan Carlos Zepeda, the president of Mexico’s Comisión Nacional de Hidrocarburos (National Hydrocarbons Commission, CNH) said.

“Exploration in deep water can take as long as eight years and production can be up to 10 years, so the current low prices don’t really have a big effect on these projects,” he added.

Analysts note that Phase 4 will award access to the most lucrative and highest-yielding exploration, development and production opportunities with reserves worth an estimated $10 billion.

Round 1 is expected to attract around $7 billion in investment in Mexico where officials received a big boost of confidence from the pronounced interest in the auction for Phase 3 held last December for onshore contracts. 80 companies pre-qualified for the contest, with 51 in total participating.

“The third phase of Round 1 was a huge success, 100% of the 25 contracts were awarded and 90% were adjudicated to Mexican companies willing to invest,” notes Mr. Zepeda.

It was a pleasant surprise following the previous two phases. In Phase 1, only two out of 14 shallow-water exploration blocks were awarded and Phase 2 saw the awarding of three of five Gulf of Mexico blocks.

“Operating companies must have combined assets of at least $10 billion or stockholders’ equity of $2 billion, in addition to drilling experience of at least 1,000 meters over the past five years and investments in deep-water projects of $2 billion,” Mr. Zepeda explains.

Licensing contracts are to be awarded for a maximum of 50 years and are to be divided into evaluation, exploration and development stages.

And, of course, it is not only foreign multinational oil companies, Mexican firms are also involved, either taking part in the auctions or as suppliers to those companies
awarded contracts.

One of the big winners in the Phase 3 bidding was Mexican petroleum services company Geo Estratos in partnership with foreign operator MX Oil, who  were awarded with four blocks that the two companies had long had their eyes on, according to Director General Vicente González Dávila.

“The strategy we followed in winning the licenses for this tender was defined many years ago, even before the enactment of the energy reform itself. We had to win those fields so we defined the factors that were necessary to achieve this,” he recalls.

“Our approach is not based on the amount of royalties paid to the government, but rather it is based on the chain of additional value we can get from these operating licenses.”

Petrobal was awarded an exploration and extraction contract along with partner Fieldwood Energy.

“In the competitive bidding processes, where there is competition or you expect competition, the focus you have should not be ‘What will be left on the table?’, but rather, ‘What is going to satisfy the investor?’” says Petrolbal CEO Carlos Morales Gil. “The block we were awarded has very important reserves of very high quality crude and should be highly productive.”

José Pablo Mendoza, the Director General of Octopus Group, which has long experience in the industry as an engineering, manufacturing and procurement operator for the power, petroleum, petrochemical, chemical and industrial sectors, said he is excited about the group’s successful bid in an earlier phase of Round 1. “At the moment, we are very focused on natural gas because it is what is happening now and will be well into the future. Over the next 40 years, until renewable energy sources largely replace hydrocarbons, natural gas is going to be very important,” he says.

Mr. Mendoza praises the energy sector reforms, but is less sanguine about the government’s efforts to ensure young Mexicans will be able to take advantage of all the employment opportunities the reforms present.

“Most of the petroleum industry veterans are well on their way to retirement and young people in general are not interested in entering traditional careers,” he explains. “So I believe that one of our most important goals of these reforms should be directed towards developing our own human resources as so many petroleum workers here are foreigners.”

Another company which saw the opportunity to grow is  CMM Group, whose Director General, Rogelio Rodríguez Velázquez, says the energy  reforms spurned the move to successfully bid for a tender in Phase 3 of Round 1.
“Mexico now has the capacity to easily adapt to these new times and the reforms give us clear, firm and strong rules for everyone”, he says.

Along with production from its new venture, Mr. Rodríguez sees many opportunities for CMM in the expanding need for pipelines and other infrastructure where the company has long experience.

“This is a sector with a lot of potential because the existing supply network has to be three or four times larger. The pipelines have always been viewed as a problem but now Mexico has the financial sources and legal structure to do this,” he says.

Roxtec Mexico, the local subsidiary of the Swedish manufacturer of high-tech cable and pipe seals active in many industrial sectors, is also betting on a boom in business as these new operators open up both the onshore and offshore fields, according to Managing Director Alfonso Guarneros.

“We’re seeing opportunities not only in future work as these fields begin production, but also in the retrofitting of existing fields which need to be upgraded. Remember, an oil platform has to be refurbished every five years,” he explains.

“Our company sees Mexico as the gateway to Latin America and from here we can service the entire continent, except for Brazil where it is difficult to do business. But that’s not the case in Mexico and someday we’ll not just be distributing our products throughout the region, but opening new Roxtec subsidiaries in places like Chile, Argentina and Colombia.”

Another local firm, Transportes Aéreos Pegaso, has experience in off-shore flights and executive air transportation services.. It too hopes to benefit from the arrival of international oil companies by offering its services, as it has been to Pemex for more than 30 years.

“In 1983 we got our first contract with Pemex allowing transport of passengers and cargo to platforms in the Gulf of Mexico, proving our operation capacity and forging a solid knowledge of the area,” says CEO, Enrique Zepeda.

“When these foreign companies enter this market, there will be a strong injection of capital and work for us.  We can reach any point in the Gulf of Mexico, regardless of where their platforms are installed.”